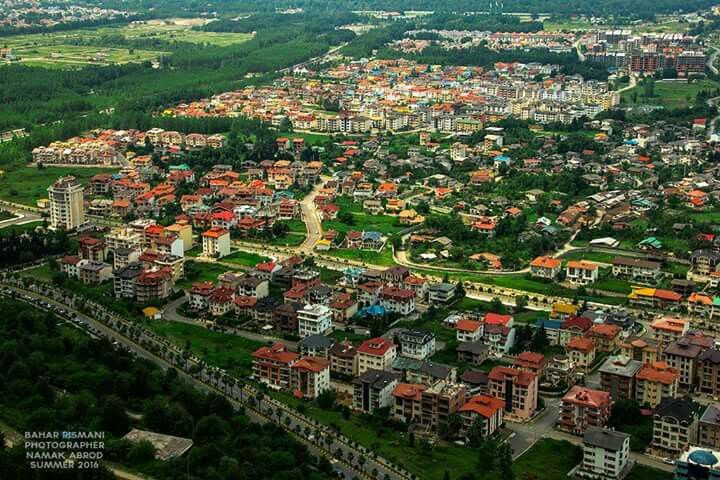 Namak Abrud is a village in the Central District of Chalus County, Mazandaran Province, north of Iran. It is one of the destinations for local and foreign tourists.

Shahrak-e Namak Abrud is a touristic village and has an aerial tramway (the longest one in Iran) which starts at the sea level near the shores of the Caspian Sea and ends on the top of the Alborz heights crossing dense forest area of northern Iran.

The Namak Abrud is a touristy town, welcoming the large number of visitors from all over the world.

The Namak Abrud resort is located exactly 12 kilometers from the Chalus county. The Namak Abrud is divided to the two residential and tourist sections. The residential section contains 8 neighborhoods designed for touristy population up to 100000 persons.

On the other hand, two forest parks named Banafsheh and Shemshad in the northern of the complex with about 200 hectare space will create unforgettable and spectacular landscapes for dear visitors.

The main purpose of the construction is to build a residential city and also a recreational center to attract non-resident population of the Noshahr and Chalus counties.

In Namak Abrud area, due to the distance from the Caspian Sea and the decrease of moisture, the type of trees and forest plan is different.

Between the coastal towns of Ramsar and Noshahr, the Alborz Mountains literally drop into the Caspian Sea. In some places, the distance between the mountains and the sea is only one Kilometers. These coastal mountains are generally around 1000 meters high. Their proximity to the Caspian Sea creates a virtual steam bath on their northern slopes and the coastal plain. Steep muddy/slippery slopes along with dense forests create many obstacles for those who wish to climb these peaks. The quick change of scenery in the Central Alborz is amazing. Traveling 40 Km south, will take you from this sub-tropical paradise to the permanently snow-capped peaks of Central Alborz , while another 50 Km, will get you into the arid central plateau of Iran.

Once you reach the top of mountain with the tele cabin you have a magnificent view of the Caspian Sea and the city of Chalus it was amazing.

One of the most beautiful views of the north of Iran can bee seen from the top of here. Amazing and beautiful

Amazing view of the green mountains in front of you and the Caspian Sea behind as you go up the mountain with cabin here :)