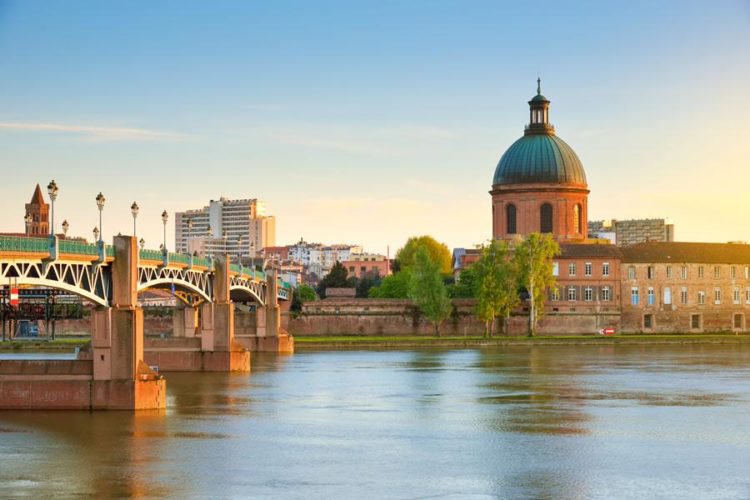 most french cities have their problems........ (trash elements), toulouse is no different and that area suffers spanish, north african arabs also! The heat there is quite unbeable for inland, and heart worm is very common killer of pets, a tormenting long long death due to the heat and humidity.

I been there know people there and see no reason to want to live there...... but up to you

For shopping : Avoid local small supermarkets such as Carrefour Market, except for emergency (aka. beer shortage at 11PM). They are really expensive. My go-to shop is Lidl. It is a really good compromise between cost and quality.

For eating : You will find a lot of places to eat in Toulouse, some cheap (Kebab, pizza), some more expensive. My favourite place is Regis Burger in Jeanne d'Arc. Best burgers ever IMHO.

For Watching the world cup : I would say every freaking bar in Toulouse :p But for important matches, try to be here early, because it will be crowded fast !

Also, try to buy/rent a bike as soon as possible. The weather starts to be really nice in Toulouse, and ISAE is close to Canal Du Midi, which is literally a highway for bike. I don't know where you will live, but on the core of Toulouse, where everything happens, you can reach everyplace in 10 min by bike.

If you have other questions, don't hesitate !

If considering Toulouse, always make sure you DO speak the language. Possibilities to find a job without the language exist but lowered paid jobs (waiter/cleaner). It is a win win situation, ...

And media professionals or others thematic pros should not consider making a move without having addressed this initial requirement. Understand me, we all know people who have succeeded and arrived without the language. But their talent to succeed might not be applicable to all of us, and their number somehow limited.

Picture a typical day off in Toulouse. Why not treat yourself to a croissant or pain au chocolat from your favourite bakery (every neighbourhood has several to choose from) and enjoy it while strolling along the banks of the River Garonne or the Canal du Midi.

Enjoy a coffee and watch the world go by on monumental Place du Capitole (it’s not just for the tourists) before you take yet another look at the awe-inspiring basilica of Saint-Sernin.

For a little culture in your day, why not take in some of the exhibits at the Muséum de Toulouse, a vast cultural site with the Natural History Museum, temporary exhibitions, two restaurants and a delightful botanical garden before meeting friends for drinks or dinner in and around swinging Saint-Cyprien.

We are in Paris because my 18 year old daughter is in photography school here, but my son and I want to get back to Toulouse as soon as she is finished the end of the Summer. We lived there in the Fall in the Centre, but you do have to be cautious about where you are there as the nightlife literally never ends and there can be no peace if you are poorly located.

Not too sure about the area around Toulouse but as for the centre of the old ville - excellent!

We would have moved there - rather than Cher/Le Centre - had not everyone else ( I am guessing Airbus associated) decided to do the same. Prices went crazy - game over.

Albi, to the North, seemed interesting. Maybe worth looking at?

None the less, Toulouse is a great place.

It's the fourth largest city in France and is also known as for it's small town feel ironically.

A lot of the city has been rebuilt and modernized however there is also a fairly substantial amount of the roads, alleys and districts that date back centuries.

The famous concord jet was built in Toulouse and the city is also France's main city for the Aerospace industry.

It's home to the headquarter of Airbus!

ENSEEIHT is part of a group of schools around Toulouse. It is located in the city center, but has available gyms on another campus of another school in the same group of schools aforementioned. There are deserved by public transportation, which is generally very good. Don't expect a big ENSEEIHT campus, it is actually five buildings around some sort of recently renovated garden. It has an on-premises academic restaurant that should be available to you at the preferential student fare.

For the student life, ENSEEIHT has a big student association. When you get to ENSEEIHT, try talking to the other students to find out more.

I know people from Cameroon coming in for a PhD, that managed to find a shared room for less than 400€. As others said, the CROUS might still have much cheaper accommodations. For other things, if you come around September you will be okay but you should find warm clothes before winter :) My Cameroonian colleagues all brought conditioned food from home to get to the end of the first month, before getting the first grants.

As for Toulouse in general, I generally advise to try to get a monthly or even yearly subscription to Tisseo, the public transportation service that covers all Toulouse and more; it has a special student fare.

Toulouse can hold its own against the world in many rankings. It was recently named the best place to be a student in France, noted for the quality of its universities and schools of higher education.

The city also stands out culturally, with the Saint-Sernin basilica, the historic 19th century Canal du Midi, which links Toulouse to the Mediterranean, and its historic city centre. Toulouse is also known for its fantastic food, and its rugby team is currently second in the French rugby league.

I lived in Toulouse for two years and visit regularly for business and vacations.

Toulouse is a very vibrant town, high technology and a high student population, of course as in any big city there are certain areas to avoid, but I have never sensed a problem walking through the city at night.

Yes the heat in the height of summer can be oppressive, but if the heat gets too much and you don't have a pool, one and a half hours drive and you have the choice of the mediteranean coast or the Pyrenees, but I guess you know the many advantages if you have chosen to move there.

I have lived in Toulouse for 3 years. It is a very pleasant and safe city. There are less nice neighborhoods, like around Mirail University, Reynerie and Basso Campo, but they're few. Generally recognizable by consisting of nothing but large low-income apartment buildings. The central city and most of the suburbs are very livable. It is indeed a very vibrant and welcoming city, and the climate is generally pleasant.

It can be a good idea to check in with local organizations. Americans in Toulouse www.americansintoulouse.com/, for example, whether you're American or not. Or, like, Expat Assistance, www.expatassistance.com/, which can be helpful in finding housing and arranging formalities.

Toulouse is a beautiful part of France, full of historical landmarks and peaceful green areas and parks

Hi! I'm an American who's been living near Toulouse for 25 years. There's a lot of aerospatiale employment possibility in Toulouse, which is good, because otherwise it's very very difficult to get a job in France. Best advice: you really should get your French language skills in shape :-) All the rest follows from that.

Toulouse is a beautiful city. I lived there for 3 years.

I'm from Scotland and I did my year abroad in Toulouse last year, studying at the business school there and taking the majority of my classes in French. It's a beautiful city and nowadays aerospace is definitely its primary industry; so many of my friends were doing internships and grad schemes at the time with Airbus and the like. I thoroughly recommend going there, as long as you prepare well.

Of note as well is that Toulouse isn't like the bigger cities of Paris or Lyon, in that you can't rely as much on English and you'll have to have at least a rudimentary knowledge of French to get around.