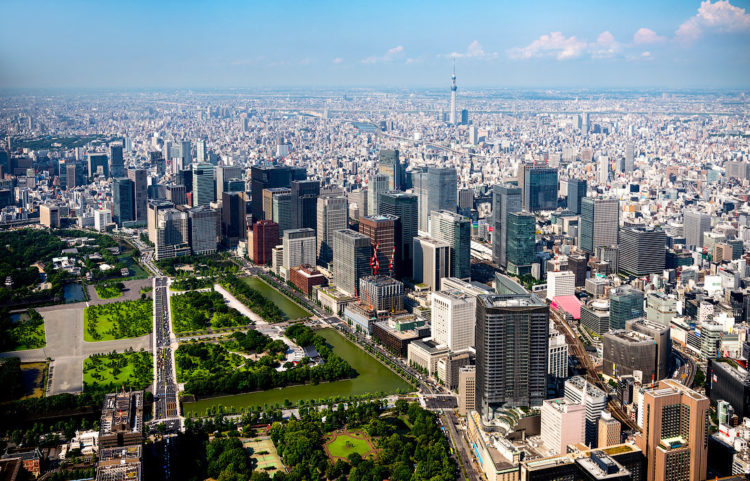 What kind of westerner are you? People from the US will probably find Japan expensive, people from Australia/Scandinavia will find it cheap.

As for "the outskirts of Tokyo"... well, it doesn't really have an outskirts until you hit the mountains which are some hours away from the "center". The whole tract of land between Japan and Osaka is basically one big megacity where no matter where you land, you will be "city living".

You'll get by just fine in Tokyo/any major Japanese city with just English assuming you already have a potential job opportunity that does not require Japanese lined up.

I lived near Tokyo then moved to Kumamoto, Tokyo was great in the 90's fascinating, exciting and great to travel from but not easy to meet Japanese people as everyone was from elsewhere. Kumamoto on the other hand was parochial and conservative but easy to get around and build friendships. Do both if you can as any big city is way different from the countryside

I lived in Tokyo for a year and a half, and I liked it overall, but it depends what you’re into. I found that there were a lot of free art exhibitions and galleries to visit, but live music and concerts are expensive, even for unknown bands. Food is great, and it’s VERY cheap to eat out compared to most US cities, especially if you know where to go.

Rent is high, but honestly no higher than New York, especially since apartments tend to be smaller - it cuts down the overall cost. You’ll spend less money on stuff you don’t need and more money on experiences traveling around and going on day trips, even more so if it’s your first time in Japan.

Tokyo also has an interesting mix of old and new, with temples and shrines populating every neighborhood - including red light districts. It’s also very safe (you will rarely, if ever, feel unsafe walking down the street).

The major downsides come from culture shock and the inability to communicate if you don’t speak Japanese. Most people know basic English, but you’ll be shocked at how few people speak fluent English in a huge global city.

Recently spent a few days in Tokyo on the way home from Europe with partner and young children and it made an awesome impression. I'd visited Osaka/Kyoto on my own 20 or so years ago and fortunately then was visiting a fluent Japanese speaker as it was much less navigable without Japanese than I found Tokyo this time. The calm, polite and clean (but still new and vibrant) environment was refreshing after Europe. Has me entertaining the idea of living there for a year or two in semi-retirement down the line if I can work that out - would definitely make a decent effort of learning the language before I did though. Might take another visit or two to determine whether its a place to live rather than visit though. The article is right about the "crazy" though - its there if you look for it but much more muted than you'd expect from media.

Spent a week in Tokyo recently, and absolutely loved it. So much to do. The people were great, especially for me as I'd rather observe than interact. There is a lot to be said for mono-cultured countries, other examples are the Scandinavian countries, who now with increased immigrants are having trouble.

I lived in Tokyo for two years in the mid 90’s. At first I suffered massive culture shock at the size, density and complexity of the place but, having settled into it, it was EXCITING!!! I was in my mid 20’s, earning great money, seeing great bands, meeting amazing Japanese people who have remained friends to this day, drinking great beer and generally having a ball in a unique, fascinating and sophisticated town. Safe, civilised and generally marvellous. A formative experience in my life that opened my mind to the possibilities of travel and provided me with a lifetime of memories to treasure.

Love it here in Tokyo. Great shopping, restaurants, networking, activities, convenience, etc. But I will say with a caveat, you should be making decent money to enjoy it otherwise you’ll be struggling.

Loving it here in Tokyo. Everything is walkable, or walkable from train. Haven't needed a car yet since moving here. Work is 25 minutes door to door. Lots of green space around, many little shops and restaurants. Curiosities everywhere waiting to be discovered in side streets and open air markets. Lots to love in this city

I personally love it. Super walkable, tons of shops and restaurants. Subway stations everywhere. Of course you pay more for less when it comes to apartments but otherwise costs are really reasonable and it's very convenient. Source: living in Shinjuku for 8 years.

I'm happy here, but I actually enjoy going out for drinks with colleagues and people in the industry, and all the work/companies are here.

All while maintaining a quiet suburban family life w/easy access to good schools, shopping etc. Once you find that right balance that allows you to enjoy both on and off time, this is a great place to live.

There are some very good answers here, but I don’t mind throwing in my 2 cents. I lived in Tokyo for 2 years. It’s definitely an interesting place… I was able to bike almost everywhere. Public transit is among the best in the world. I’m a bit of a train geek so I didn’t find it that hard to get around, but I do study the maps. Tokyo has so many different little areas that are fun to explore. I did speak decent Japanese, but it’s not too difficult to get around if you don’t know much. Food there is pretty great. People are generally welcoming and helpful, but there’s some amount of racism, probably because it’s such a homogenous place. I had the fortune to live in a shared house with Japanese people so I learned a lot about Japanese culture that way. I generally find that there’s a lot of segregation between Japanese and non-Japanese people. Japanese people tend to work together and would meet people like me only if they’re studying English. In that sense, it can be hard to make Japanese friends, but Japanese people do want to meet foreigners, at the very least so that they can practice their English. Lots of foreigners who go to Japan are men, so both Japanese men and women are quite happy to meet foreign women.

I lived there for 10 years. Coming from NYC, I found I missed some of the entertainment I liked back home, such as music and art galleries. There just seems to be less of it in Tokyo and it’s harder to find. But the food is better and most aspects of life are generally better organized. Day trips to the mountains for hiking and skiing are also very doable.

After a few years there I was married with kids, so entertainment gets deprioritized and other things take charge. For big city living with little kids, Tokyo is hands down better than NYC. Imagine ubiquitous, clean public restrooms, lots of restaurants where your kids are truly welcome, and a safe enough environment that 1st graders take the subway by themselves to school.

Oh, and I shouldn’t neglect to mention that the more Japanese you learn, the better your life is there.

I always find festivals to be horribly overcrowded in Tokyo. It's much better to visit popular places on weekdays to avoid getting stuck between hundreds of people. I love living here as well though, there is so much to do and see and it's got a low crime rate, like you said. Good article.