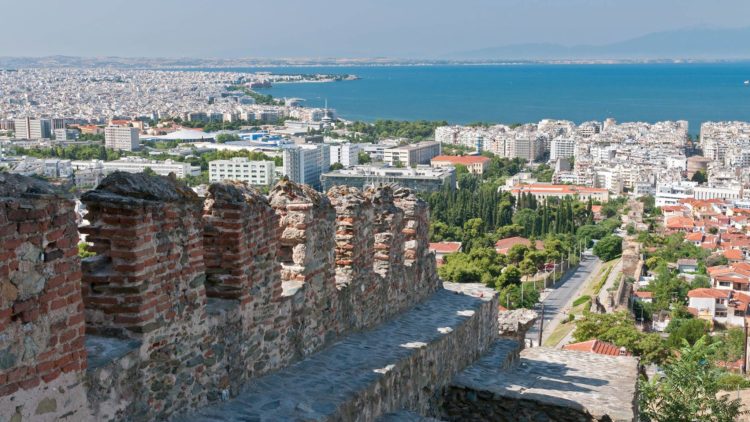 Expats moving to Thessaloniki will find the city to be lively and beautiful, with the area home to some of the most stunning architecture of anywhere in Europe. The exciting cafe and bar culture makes it a busy place to be. You will just have to get your visa for Greece sorted first.

Thessaloniki is in a transitional climatic zone, which means it has a very variable climate. Temperatures tend to be around the 30°C mark during the summer months, which are dry. The summer season lasts from May to September, with July the hottest month in Thessaloniki. Summers are hot and humid, with rain usually only falling during thunderstorms, which are quite common. Thessaloniki has also been known to experience heat waves during the summer.

Winters are usually dry, but it is common for there to be frost in the morning. Temperatures can drop to as low as -10°C during winter. There is usually some snow, too, but not much, with January being the coldest month. Thessaloniki can also be a foggy place to live.

Expat living in Thessaloniki raises plenty of questions, for instance: ʺWhat are the requirements from Greek authorities to get a residence permit?”, ʺWhat do's and don'ts are appropriate when visiting an Orthodox church?ʺ, or ”Who can recommend moving companies in town?”

Athens is surely a nice city with a vivid night life, museums etc.

But the fact that it's so crowded and noisy makes it difficult to live in and sometimes faceless. For people in Thessaloniki, Athens is considered a good destination for vacation (3-4 days) mostly because of the music scene that's stronger there but I personally think more days will get someone easily tired.

When it comes to the public transportation you have many options compared to Thessaloniki but the truth is in Thessaloniki you can easily live with less if you enjoy walking (unless you want to reach more difficult areas). The city is way smaller than Athens and I believe it keeps a more traditional character. There are many many students, many kinds of night life (clubs, bars etc) without the need to travel hours with the bus. If you enjoy food, Thessaloniki's little streets and places (like Ladadika) will give you the joy you're looking for. And if you're more athletic a morning run at the beach feels great.

And my favorite part is..You take the bus and in 30 minutes from the center or less you get to Kalamaria. A beautiful region with a nice little sea port, perfect for a morning coffee.

Because Thessaloniki has all the advantages of a big city but it's not faceless like Athens. it's not so small that you cannot "hide" anywhere like a small city is. As a good friend of mine always says: "Greece has 3 types of cities. A big european city like Athens, Thessaloniki and all the rest." People are really friendly, it's easy to find a place cause the stracture it's not complicated and you would never get bored here.

I thing to move to Thessaliniki is not bad idea.

Every town has advantages and disadvantages.

Thessaloniki has a great history and ancient monuments ,

the view or a nice coffee.

Also the has an excelent cuisine with variety of greek foods.

Some disadvantages are trafic and pollution but I thing is

something common to crowded and alive cities.

About the Thessaloniki metro you can see the map. The red line is where the main line of the metro is built (It will go thorough the most important streets) so it will be the first one complete and probably the most active one construction wise.

However, having walked around the city a lot I don't have the impression that the construction sites are particularly loud (compared to the noises of the city like the cars).

2) For apartments, you can google "Thessaloniki apartments for rent" to get a general idea for what you will be looking and the prices. As I was lucky enough to not need to look for an apartment I can't give you much help. I would suggest however to get looking and find something before the end of August as around that time the results of the general Greek written exams are published and the students that are accepted to universities e.t.c. start looking for apartments. Usually they (we) go for cheap apartments in the range of 200-350€.

Ooh and you should find a apartment that is close to your college or at least reachable by one active bus line. I can't help you much here because I don't know the college you are going to.

The first thing you have to know if you are a student in Thessaloniki or you’ve just moved there for business or any other reason is the key aspects of the city. As I have seen basically there are universitythree basic parallel to the sea streets: Victory Avenue (this is the coastal road), Tsimiski street and Egnatia street. All three of them define the city center. There you can find literary everything. From the famous pies and excellent food flavors, to the bars and clubs that stay open until early morning.

Thessaloniki is beautiful, not only because of its young vibe, but also as a cultural city. With so much amazing history, you can easily spend weeks just exploring its past. You’ll love the wind, the kids playing football near the main church, the smell of the sea and the crowds of tourists and locals, perfectly combined into a chaotic order. You’ll never forget the sunrise or the sunset, if you are lucky enough to witness both of them.

Turks usually feel very comfortable in Thessaloniki. The center of the city or "kentro" is a great area of town and there are several great restaurants and bars in Valaoritou, the waterfront and Ladadika. Thessaloniki is very relaxed and open. Not like Athens. Enjoy it and let us know how you like our city

Welcome to Thessaloniki a third world internet city. Unfortunately, your only reliable solutions are Cosmote and HCN.

Other competitors such as Cyta is out of the question since they are in the process of leaving Greece thus they do not give a crap about their service. I have had HOL for over seven years in my family home, and their service has deteriorated dramatically in the last two years. Most of my friends and family have either Cosmote or HCN, just pick and choose based on your budget. I think the 2-3 Mbps is a worst-case scenario, most of friends and family with Cosmote get around 5-6 Mbps. If you can afford HCN, treat your self!

I don't live in the city the last ~two years, and I base everything I say from short-living experience while I visit and discussions with friends.

People of Thessaloniki are generally very welcome and friendly. We, people of Thessaloniki, don't feel like we live in a big, chaotic city, like Athens and we feel more free with others. The seaside is beautiful and of course many places to get a drink at night like Valaoritou str or Ladadika and the industrial area which is full of night clubs (which I don't really choose to have fun). P.S. If you are a "tree", look for your love at Navarinou square..

One thing I might add - I visited Thessaloniki in 2008 and loved everything about it. Great bars, nice people, good food, and I love the kentro.

Across the road from the train station, there is a place that makes Gyros. About 3 euro for a pita with about two kilos of meat in it. To this day I still talk about that amazing gyros from that guy.