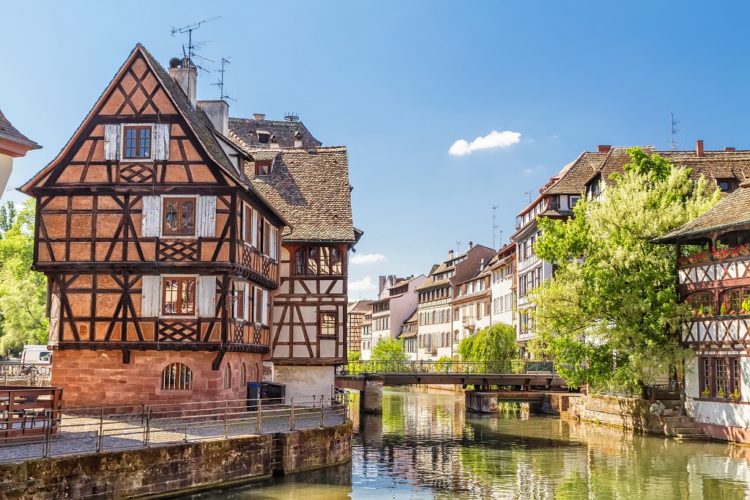 With all the twee timbered buildings in the historic centre, you’ll be forgiven for thinking you’ve stumbled over the German border. Here in Strasbourg, France meets Germany in a unique blend.

Strasbourg is a European melting pot, which is just as well, considering Strasbourg is home to institutions such as the European Parliament, European Court of Human Rights and the Council of Europe. It will come as no surprise that Strasbourg is often named the capital of Europe.

Business is big in Strasbourg, and along with one of France’s biggest student populations, Strasbourg is a thriving, vibrant city. There are ample business opportunities on offer in Strasbourg, but luckily, it’s not just work and no play.

Strasbourg is the biggest financial hub in France after Paris, therefore, the tertiary sector accounts for just over two thirds of jobs on offer in the Alsatian capital.

Alsace is an important player in France’s industrial output. With corporate players such as Punch Powerglide Motors (formerly General Motors Strasbourg), Mars, and Kronenbourg having headquarters nearby, the automotive and agri-food industries are big sectors in Strasbourg.

Start your day by getting your sweat on at Parc de l’Orangerie. Known as the lungs of the city, you can walk, run, or cycle around the park. If you’ve got the kids in tow, you could even visit the zoo and farm there. If you just want a breath of fresh air, you can enjoy the peaceful surroundings by getting on one of the lake boats.

Now you can make up for your saintly behaviour by enjoying a leisurely brunch. All along the Grand Rue in Petite-France or in the achingly Krutenau are a variety of brunch options. Afterwards, wander around the medieval city centre and allow yourself to get lost. There are so many nooks and crannies to be found, you’ll discover something new each time.

If it’s winter time, warm up with a cup of vin chaud at one of Strasbourg’s world-renowned Christmas markets. If it’s summer, then you’ll have to make do with a glass of local Alsatian wine or a pint of beer! You can sample some of great beer at a Strasbourg institute, L’Académie de la Bière, or if that doesn’t take your fancy, you can find a tranquil spot to sit, have a quiet drink and people-watch.

If you happen to be non- EU citizen, then you must do the following:

Get your Birth Certificate translated into French from an authorized translator.

Learn to speak French because that will help you to get to know French culture better.

Carry some spicy food items because that is hard to find here.

Get a travel currency card(Forex card), it is very important to have one.

If, you are a student then you can get CAF from the French government, so apply for it as soon as possible.

Have a extra set of VISA format passport size photographs.

Strasbourg is a lovely city and it is one of the calmest cities I have ever seen. The weather is amazing and I cannot tell you how beautiful the city is.

Strasbourg is the official seat of the European Parliament and the capital city of the Alsace region of Eastern France. Strasbourg is a city steeped in culture, history and political importance with several European legislative institutions headquartered in the city.

Located close to the German border, Strasbourg represents an alliance between France and Germany and its culture is an exciting amalgamation of the two nations. In 1988 Strasbourg was awarded the title of World Heritage Site by UNESCO, the first city to receive the classification and Strasbourg remains an important hub for Franco-German relations as well as a prime location for both the French and German economies.

The seventh largest city in France, Strasbourg had a population of 270,000 in 2014. Its inhabitants and culture are diverse, and demonstrate the co-existence of the European community.

Strasbourg has what is known as an ‘Oceanic’ climate, with warm sunny summers and cold overcast winters. Snow is common in the winter months, on average falling for approximately 30 days in each year and rain is not uncommon throughout the seasons.

Strasbourg’s temperatures range on average from between -7°C and 26°C, with recorded lows of -23°C and highs of 38°C in extreme weathers.

Due to Strasbourg’s location in the Rhine Valley, it is afforded protection from weather fronts bringing strong winds; conversely, this means that Strasbourg is also one of the most polluted cities in France as this ‘protection’ also inhibits the cities exposure to fresh air and natural aeration.

However, the decline of heavy industry and the government’s introduction of traffic calming initiatives in the city have seen marked improvements towards reducing air pollution.

Strasbourg is a very cultured city, where numerous events take place and there are a host of museums. Pedestrians and cyclists are given priority in the city, which makes it a pleasant experience. It is well connected by road and railway to Paris, Lyon and Germany. Is historic centre is a UNESCO World Heritage Site. The economy is a fundamental aspect of the city, with its industry, port activity, finance and the presence of international companies. Places worth visiting include the European Parliament and the Strasbourg Cathedral. In addition, it is the starting point for the Alsace region wine route which goes between France and Germany, where you can taste the best French wines.

If you are a student, you may have access to student accomodation through the CROUS (the government office responsible for student grants and accomodation). It depends whether or not you will be studying in France within an exchange program. If you are in an exchange program (Erasmus, etc), you can have a look on http://www.campusfrance.org/en, or ask the international service of your university. If you are coming on your own, you can contact the CROUS directly.

You're probably wondering about neighbourhoods. If you want to work on your French, the city of Strasbourg has a list of the neighbourhoods, with their history, the various projects there, etc. You'll never be very far from anything, since Strasbourg is not that big, and you can bike or take public transport everywhere. Still, since your campus is in Illkirch on the south side of Strasbourg, it would probably be better for you to find accomodation in that general area, or at least on the tram E line. The Neudorf neighbourhood is a nice place, pretty cheap.

Feel free to ask if you have more questions.

strasbourg is pretty flat and a bike is a great mean of transportation. for beer, you could try les brasseurs, a bar that has homemade beer (I can't comment on taste, I don't drink), maybe you'll like it.

I have never lived in the city center, but I think these neighbourhoods are safe. Orangerie is nice and has a lot of students as it is close to Esplanade where parts of university are situated. Avoid Neudorf, Cronenbourg-cité nucléaire (old Cronenbourg is ok) and Hautepierre. Personnally, i don't like Koenigshofen (route des romains) but that's personal taste, I think.

Hey, I lived in Strasbourg for a few months last year, and as far as banks are concerned, avoid Crédit Agricole. I'm not sure if it was just the branch at Esplanade, but I didn't receive a properly-functioning debit card for about three months. Most people I know were with either BNP Paribas or Société Générale, and they never seemed to have any problems.

As far as neighbourhoods go, I'd avoid the area around Gare Centrale, and I heard Neuhof wasn't great, but I've also been told it's improving. Seconding Contades, Krutenau and Orangerie as great places to live.

Like it's already been said, there's a lot of language exchanges going on (I think Strasbourg takes on the most Erasmus students in France outside of Paris per year, but I could be wrong) - La Taverne Française hosts one every Monday evening during the semester, which is a great place to meet other people!

Enjoy Strasbourg! It's a fantastic place :)

We have never been to Strasbourg, but been to Paris many times. If Strasbourg is half as charming as Paris, I would love it see it. 🙂 Sounds like it is. I will have to make sure to see if the next time we are in France. Thanks for all the great info on this beautiful city.

Strasbourg looks lovely! I have been wanting to go on a river cruise in Europe for so long but wasn’t sure which one. I thought I was leaning toward the Danube but now I’m not so sure!!

I’m in love with strasbourg too

Strasbourg really is easy to fall in love with. In fact, my family is considering going to Strasbourg for a whole month next summer! If we do, we’ll be sure to stop by Karlsruhe to see the castle!