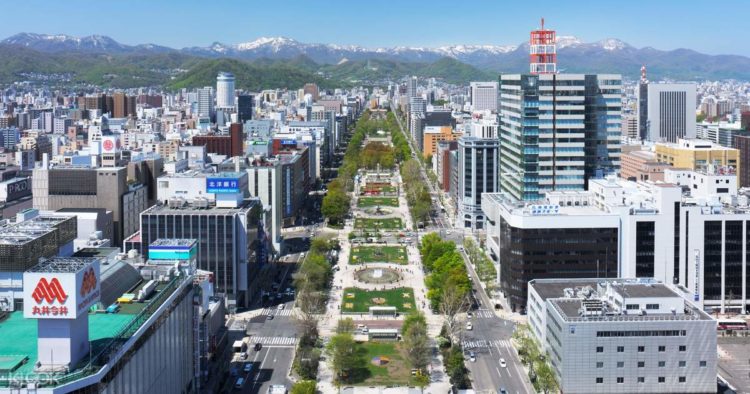 I moved from Yokohama to Sapporo in march 2013.

We didnt bring a lot of furniture (no sofa, no fridge, no washing machine)

because we wanted to buy new one.

we filled a small truck.

All I can say is to do shopping : The price was really different from a company to another.

If some japanese speaking friend can help you, it would be the best.

In any case, what's gonna happen is that they will visit your appartment or house and you just

show them what you want to bring or doesnt want.

To be honest, in Japan (or at least Kansai) , the top three companies are Arisanmaku (unsurprisingly, the brand with the ant) 0123 and Sakai (with the panda as the mascot.)

I have used both Arisan, and Sakai, not 0123. I personally found that Arisan are often the cheapest by a long shot, especially when it comes to rivaling other companies quotes. However, Sakai were definitely the most professional and friendly, if that matters to you. I found the Arisan guys to be very abrupt, and not so polite to each other (but they were fine to me.) Sakai did it very quickly, and were just that little bit more professional. However, money is often the deciding factor in these things ...

I would ask all three for a quote, and then they will probably fight over each other trying to beat each other.

I have no idea about moving from Tokyo to Sapporo, but a friend recently moved from Osaka to the Okayama/Tottori area, and had an apartment full of stuff (she has 3 kids, so it would have been a 60-70ish meter apartment, if you can imagine) and I know it cost her about 700,000, even with the cheapest quote. Ouch. This will depend on how much stuff you have, of course, and if you live in an with an elevator, and if the place you are going TO has an elevator. (If not on either end it will cost more.)

If at all possible, a much cheaper alternative is to do it yourself, but again, if you have your own fridge, chest of drawers, beds, tables etc, this becomes a bit hard. And most of the larger rental trucks in Japan you need a manual driving license to operate. Just FYI.

Good luck with the move!

EDIT - and I doubt any will have any English support - I would line up a friendly Japanese friend in need of a few beers to help, instead! Much easier.

Sapporo is almost as warm as the Kanto area in the summertime. The east coast of Hokkaido is the only part of Japan other than the mountainous areas where it isn't crazily hot and humid from May to October.

Recently I moved to Sapporo for my job, work is fine.. working days are busy, but here life seems to be inconvenient if you don't speak Japanese, I really need to learn now.. moreover I need some good friends to hang out on weekends... I am sure there are many foreigners or English speaking Japanese living in Sapporo, but just not getting in touch... may be someone here?

have a good day!

I could give you a lot more interesting details, but as I said, sooner or later someone would figure out who I am (there are very few secrets in Sapporo) and I value my privacy on the 'net. I might be in TK6 on Friday evening for a couple of jars. Saturday is my wedding anniversary so I'll probably be elsewhere.

Well, within Sapporo, there's not so many actual places to visit, so it's mainly the festival schedule that keeps people entertained. The two that are coming up in the next few months are:

6th June - Yosakoi Soran - 44,000 dancers lining practically every street in the center of town - it gets bigger every year and you won't be able to miss it because the entire city center will be impassable. It's not everyone's cup of tea, but personally I love it.

Then in the summer, probably everyone's favorite event - the Beer Festival. A whole chunk of Odori Park gets taken over and Japan's 4 main breweries (Sapporo, Asahi, Suntory and Kirin) each open a huge beer garden stretching for about 5 city blocks.

Susukino also has a festival where they close off the roads and eat in the streets and don't forget the fireworks displays every Friday on the Toyohira River (I think in July IIRC).

I'm a native of Sapporo. I lived in the US and currently I live in Europe. This summer I visited my family and best friend in Sapporo with my girlfriend. It'd been almost 6 years since I visited them and this year I has a huge blast. I re-realized how much I love my hometown Sapporo and my girlfriend was literally astonished. It was her first time to visit Japan. I felt like I was a foreigner when I was there because of cultural difference between Japan and Western countries. It's weird to say this since I'm Japanese but Japanese people are super respectful. My girlfriend didn't feel out of place at all. People don't stare at foreigners in the way I get in the country I live in. I think if you're capable of Japanese orally, it won't be hard for you to find a job. If speak English natively or fluently, there are more opportunities to find a job.

I would recommend visiting for a holiday. Personally I loved Sapporo the times I've visited my friend who lives there. For jobs I would look around on some job sites to see what is available etc. But definitely go up for a holiday.

Sapporo compared to Tokyo and Chiba... Not really sure. But off the top of my head it kinda reminds me of Kawasaki in Kanagawa. Nice modernish central area with underground shopping and walk ways.

Living in Sapporo is fantastic! Especially if you enjoy cold-weather activities like skiing and snowboarding as we are covered in snow for approximately half of the year. Even that said, it doesn’t feel nearly as cold to me as when I lived in the Midwest in America even though the winters there were shorter.

In the warmer seasons such as the early part of May flowers burst into bloom like a fireworks display. Summer is perfect with cool temperatures, low humidity and greenery everywhere and in the fall we have some of the most incredible colors. Food is amazing here, particularly seafood but Hokkaido also produces most of the dairy for Japan as well as a large part of other agricultural products.

Even though Sapporo is the largest city in the world in such a northern climate and the population is nearly 2 million strong, in many ways this urban community has a very hometown feel to it. People tend to be open minded and I’ve heard that aside from some really countryside Hokkaido dialect the way that Japanese is spoken here is readily understood throughout the rest of the country and many people come to learn Japanese here just for that reason.

Public transportation is also quite convenient for going into town via the subway, trains and streetcar depending on where you live. Housing costs are much more affordable than Tokyo as well.

I’ve lived in Sapporo for 16 years and though I’ve visited many amazing places in other parts of the country I can’t imagine living anywhere else.

There are many expats living in Sapporo for sure and some even in Otaru.

Sapporo basically has everything a normal Japanese city usually offers. Whether you would want to live there in long cold Winter month depends.

Otaru is more like a town than a city. There are no Yodobashi Camera, Don Qujiote, Marui 0101, Daimaru, Ario Shopping Mall,Tower Records, Junkudo, or Animate (but it is a 40 min commuter train ride to Sapporo).

But there are Mister Donuts, Kentucky Fried Chicken, McDonalds, if you really need them (you probably don't).