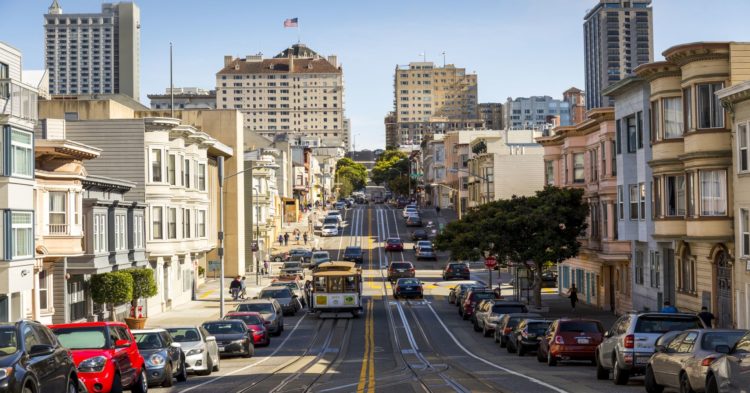 I have lived in San Francisco Bay area for a long time. The problem is all these tech. Startups ruined San Francisco. It’s no longer what is was before. Yes, it’s always been an expensive city but now it’s gone overboard. I can’t wait til all these new ppl get out once everything crashes down.

The majority of the city’s old-school bars are located around the Chinatown and North Beach areas. You’ll find some real historic SF institutions here, such as The Saloon and Vesuivo Café. For something more glamorous, head to the glitzy Marina district for rooftop cocktail bars and a sophisticated crowd. For the best clubs and biggest DJs, SoMa is the place to go. DNA Lounge has three floors of dance fun to be had, while Monarch is a booming steampunk palace. As the epicentre of American LGBTQ culture, San Francisco has an amazing collection of gay bars and clubs to choose from. The Castro district is where the heart of the action lies, but you’ll find gay-friendly establishments all over this liberal city.

For a quieter evening, check out the San Francisco Theatre’s calendar of plays, ballets and operas. Or head to the iconic Art Deco Golden Gate Theatre for the best Broadway musicals.

Weather is typically mild. Average temperature year round is about 60 F. The summers might drop to the 40s and it might get into the high 70s during the summer. When it gets to 80, that's considered hot here. It also depends on which part of the city you go to. The western portion is perpetually cooler and covered in fog while the eastern portion is warmer and sunnier. Temperature can fluctuate from 50 to 70 going from one part to another.

Safety depends on where you go. Some parts are better than others.

I'd lean no in this case. The only reasons I'd come to San Francisco are fantastic job opportunity, family, or a strong, clearly articulable desire to be in the Bay Area (nature, food, vibe, whatever).

Former Chicago resident as well. SF is a sleepy town compared to Chicago and other cities out east when it comes to drinking and after hours fun. There are bars in Chicago open until 5am.

I was an AmeriCorps member living in San Francisco and I made under minimum wage, perhaps $450 every two weeks. I always had at least three roommates, lived off of a website called SFFunCheap (it lists free and cheap events), collected SSI/SSDI (another $700 a month) and read for fun. I read maybe 300 books because it was a huge part of my time.

I studied, networked in SF, and make 6 figures now with a bunch of other friends who make about the same. I live in a two bedroom with a PhD taking one room and my gf and I taking another. It’s a pretty good life I have now. If you have a STEM ambition, especially in CS, SF is the place to let it flourish. Medical sciences might be better in Austin or Boston though, and those actually require the relevant degrees.

Also the weather is nice, and hiking out in Big Sur, camping in Sierra Nevada, or Tahoe is part of the allure. It’s also pretty close to LA

If you’re asking about the people who work retail without this ambition though, then I honestly don’t really know.

San Francisco is home to the "Mission Style Burrito" made famous in the city's Mission district in the 1960's. What makes this burrito special is its gigantic size, as well as its extra rice and customisable ingredients inside. The La Taqueria Sushirrito is the place to be for expats who want to eat Mission-style mouth-watering burritos. For those who are craving for their daily dose of caffeine, The Buena Vista Café is a major coffee hot spot in the city. Aside from these amazing dishes, you can try another city staple, the Chowder in a Bread Bowl at Boudin Bakery.

One tip: you should never call San Francisco, San Fran, Frisco or SF. We locals hate that.

There are plenty of differences between San Fran and other major cities in the US, like NYC, Chicago and L.A., but much of life in all these cities is very similar. Raising rents means space is at a premium in SF, so consolidating your life into a small amount of essential items helps significantly. The people also share a lot with other city dwellers, including political beliefs and idiosyncrasies.

San Francisco’s weather is generally mild, with a few caveats. It can get chillier than you may expect, and temperatures can be unpredictable. Additionally, as a city made up of microclimates, one neighborhood can be warm while another is chilly — no matter the time of year. Cool winds are also common. A good rule of thumb frequently espoused by locals is to dress in layers and always carry a light jacket or sweater.

Summers are cooler than is typical of other parts of the country, although rain and humidity are unheard of during this season. Winters are moist and rainy, but temperatures are mild. Spring and fall are reliable times of year for pleasant, dry, sunny weather, although an 80-degree day can surprise you any month of the year. You can also, of course, expect a lot of fog all year round.

People who relocate to San Francisco are often shocked by how many young adults there are compared to children, teenagers and older individuals. The tech boom has attracted hordes of young adults between the ages of 20 and 39, who make up San Francisco’s largest age group. Unsurprisingly, the high cost of living has priced out many older residents and families with children.

Speaking of children, San Francisco is commonly cited as having more dogs than children. That exact claim is debatable, but we do know that SF consistently ranks low among major cities for percentage of children in the population. It constantly ranks high, however, for dog-friendliness. An abundance of dog grooming facilities, doggy daycare, dog parks and other canine accommodations are easily found in San Francisco, in addition to dog-friendly apartments, hotels, shopping centers and even restaurants. The city’s walkability and mild weather also make it a great place to raise a four-legged friend.

Two years ago I came to San Francisco on my 25th birthday, I fell in love. This is a magical city full of amazing people, delicious food, and the best coffee on earth.

Three months ago I joined the team at CircleCI working remotely out of New Jersey. Out of those three months I have spent six weeks here in SF and I find that although working remotely is really convenient it makes it a bit harder to collaborate and get things done.

So today, I am excited to say that I will officially be living in San Francisco as of Sunday and working at the CircleCI office on Market Street full time. I signed a lease today and I am going to be living in an awesome apartment near the Civic Center in SOMA. I am so excited to be a part of the city and the community.

I am very grateful for the opportunity to live in the city that I love so much. If you are ever in town, let me know and I would love to share some of the amazing coffee with you.