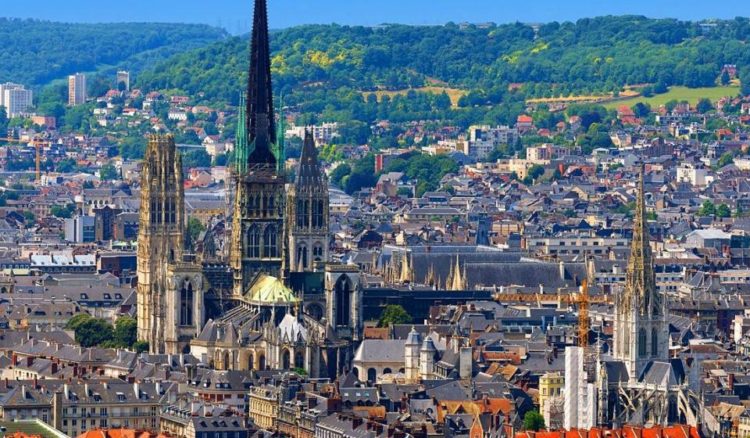 To start, Rouen was the perfect place. With about 110,000 people in Rouen proper, it’s small enough to interact with French locals yet big enough to enjoy the bustle of city life in between classes. I had never lived abroad until this year, and now I happened to find myself in one of the oldest, most picturesque medieval cities in Europe!

The city of Rouen is a city with a human dimension. The best way to discover it is to walk. And whether it’s shopping, monuments, museums, walks on the docks, markets, … everything remains in a restricted area. Rouen is not a big city, but at every street corner, there are many amazing and surprising places. The Tourist Office of Rouen is at your disposal plans and courses.

Rouen, nicknamed "la ville aux cent clochers", is situated in the Normandy region of northwest France, astride the lower reaches of the River Seine. The old medieval city has been meticulously restored, with many narrow alleys and pedestrianized streets to explore in this part of the city. Rouen Cathedral, its facade depicted in several Claude Monet paintings, and the Gros Horloge, or Astronomical Clock, with its fourteenth century movement and sixteenth century face, are the city's most famous landmarks. There are many street cafes and bars, and at night the city comes alive with over 150 restaurants that expats living in Rouen will be hard pressed to sample all. During the summer months, a light display is shown on the cathedral facade in the late evening, attracting tourists and locals alike. Entertainment in Rouen includes several theaters, offering live performances, and a number of movie theaters. The center is easily negotiated on foot, but there is a rent-a-bike scheme available, and with many walking and cycling routes along the Seine and in the surrounding countryside, expats in Rouen can enjoy quality leisure time, alone or with friends found online through the InterNations website.

If you are going to Rouen, you will have an amazing time for sure. Try to party the most you can and meet a lot of people. If you do so, you will have the best year of your life and will never forget it.

I didn’t get to enjoy any “amazing” restaurant in Rouen, so I don’t have much experience to recommend you local restaurants. Also, most of the students didn’t spend much money in restaurants, but instead we cooked at home with some friends and made great dinners with lots of alcohol for the same money than we would spend at a restaurant.

Also, be open to meet people from other cultures because learning about other cultures and countries is one of the best things about going to study abroad. Don't stay in your rooms when you don’t have classes, go out to discover the city and meet local people.

Rouen is cut in two parts by la seine, there's not much to do/see in the "left side" of Rouen.

Begin your journey from "la place du vieux marché", officialy it's where Johanna d'arc was burn alive, be sure to explore all the place, there's lot to see in this small aera.

The tourism office is in front of the cathédrale.

Walk on left side of the cathédrale, yeah an another church !

Go down the street on the left side of that church, you'll find the art school (l'école des beaux art) if m'y memory is good.

You can take thé street on the left of the church, you'll see "l'abbatiale saint ouen", the big building Just beside the abbatiale is the town hall.

By train – there is a mainline TGV station – Gare de Rouen-Rive-Droite with services to Paris, Amiens, Lille, Lyon, Marseille and Le Havre; a regional service operates to to Caen, Dieppe and other local stations in Normandy.

By Plane – Rouen has its own airport with services to domestic cities and Europe.

By ferry – Caen, Le Havre, Dieppe (about an hour). Calais port and the Channel Tunnel are around 2.5 – 3 hours diving distance.

In Town – buses and a tram service.

Go to the Rouen tourist office website and you'll find info about what to see and do in Rouen and environs. Nearby is the Trail of Abbeys, Trail of Thatched Roofed Houses, Lyons-la-Foret, Chateau Gaillard and La Roche-Guyon. The latter two have medieval chateaux/fortresses. Don't know about public transport to any of these places which is why I suggest a rental car/van. Chateaux are generally in rural locations not accessible by public transport. The nearby Vexin region is beautiful and has many chateaux but you'd need a car/van to explore the region and access the chateaux.

The town of Rouen in France is the capital of Upper Normandy (Haute-Normandie) and historically is the capital city of Normandy (Normandie). It is a beautiful and historic city – William the Conqueror died here in 1087 and Joan of Arc was burned at the stake here in 1431. The wonderful historic buildings have long provided inspiration to painters and artists and it has traditionally been and remains a prosperous area of France. The inland ports of Rouen were historically very important, today they provide harbour for the wealthy who park their yachts there and are a stunning backdrop at which to sit and watch the world go by. Rouen is an area of historic buildings, rustic farm buildings, lovely harbour views and lush rolling countryside.