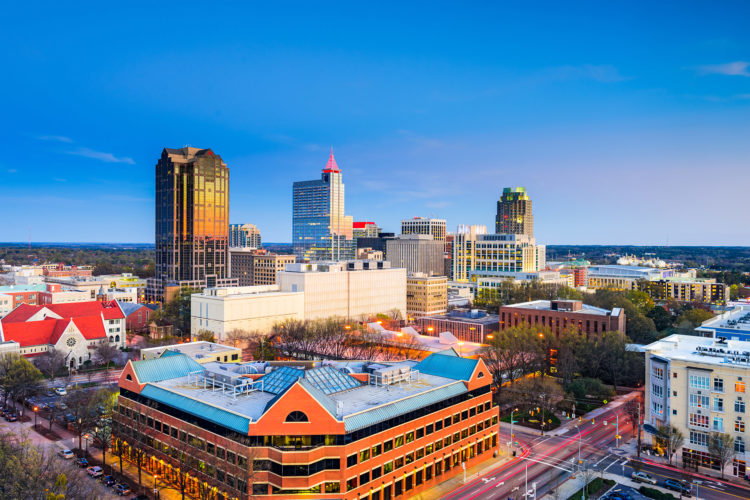 One of the best parts about Raleigh is that it's a city with a small town feel. Raleigh is a city where people know your face and that's all they need to know. It's often you will run into someone you met, recognize their face and embrace in a warm greeting without even knowing one another's names. There is a feeling of comfortability and familiarity in Raleigh that comes from that small town feel. You may not recognize it at first, give it six months though and you'll know exactly what I'm talking about.

Relocating to Raleigh NC, Great City to Move to!

Raleigh has been slowly emerging as a large technology hub, but there’s more than what meets the eye in this modern-but-quaint town.

One of the best parts about Raleigh is its location — perfect for a weekend getaway to the beach or the mountains. Plan to visit the Boone area or Asheville for hiking on the Blue Ridge Parkway in the summer and skiing in the winter. While Wrightsville Beach is the closest beach to the Triangle, at a little over two hours away, other favorite spots include Atlantic Beach, Holden Beach and Ocean Isle.

On average, Raleigh receives 41 inches of rain and seven inches of snow per year. The city has cool winters and warm, humid summers. Raleigh's location puts it in the direct path of subtropical moisture from the Gulf, heading up the eastern seaboard along the jet stream; thus the city receives ample precipitation throughout the year. It also gets many clear, sunny, and pleasantly warm days.

Occasionally, Raleigh does experience ice storms (December to April), which can cause power outages due to the build-up of ice on overhead power lines. It is therefore advisable for such events, that you secure an emergency kit- including blankets, food, water, battery powered radio etc.

The people of south have a reputation for being hospitable and the population of Raleigh is no exception to this. People in this area are warm and very accommodating to newcomers. It is very easy to develop strong and enduring friendships with those who live in the area.

I move a lot. Seven cities in the past fifteen years. Mountains to beaches. I moved to Raleigh to be near my younger siblings who are going to college here, and there's nothing that will keep me here after they graduate.

Overall, the area is just kind of, well, boring. All the doldrum of a small town without the small-town charm. All the headaches of a big city without the action to make it worthwhile. If you're the type who wants to find one good bar to go to every Friday night, you'll find one. If you're the type who wants to try new places/stuff all the time, you'll burn through this area in a year or two. As for people, this is a transient town. Most people here came from somewhere else, and most will move on. Those sort of towns tend to not be close-knit and social circles are typically quite fluid with friendships that don't often last long enough to really be deep.

Apart from that, the pollen is hellishly thick, we lack the infrastructure to handle any hurricanes or snow, and house prices are hilarious (although I'm counting this as a positive simply because I already own and am looking forward to selling in the bubble in a year or two).

I wouldn't say I necessarily regret living here, it is worth it to be near my siblings, but it isn't somewhere I want to keep living after they move. An average town that was good enough for a few years, but not someplace that can hold my interest for the long term.

Interesting that so many people think Raleigh is full of lifetime citizens. That’s so rarely the case every time I meet someone.

I moved here from Nashville- similar but much much larger. Honestly, the traffic here is nothing. If you’ve lived in any city you will think it is a breeze. I don’t know how people complain about it. Raleigh is a strong liberal & accepting city (welcome to Raleigh y’all campaign) but 30 miles outside and you see some pretty hateful stuff and I hate it. However you will find that outside Charlotte too.

If you need any tips feel free to reach out. I have a knack for being the recommendation friend. And if you’re going to buy a house, ask around before you do. You don’t want to get flooded when a hurricane comes through!

I like Durham and Raleigh because you are young. I worked downtown Durham for a few years and loved the vibe. Great food, bars and culture. Durham can be a little gritty but so can Raleigh. They both are super dog friendly and both offer Greenways, parks, coffee shops etc. I would consider your commute.. spending your life stuck in traffic 45 minutes one way is not living your best life. I’m old now and have lived in Raleigh (5 points area), worked downtown Durham (would live there if I could convince by SO), and now live in Cary. I enjoy Cary my neighbors are awesome, Bond Park is awesome, the breweries are awesome but it is a little a soccer mommish for a 23 year old.

I have lived in Cary and Raleigh and work in Durham. I'd go with Durham or Raleigh for sure. Cary is great for me, but I'm mid-30s and pretty settled. I genuinely would look at Raleigh and Durham both -- you could probably be happy either place. I like the vibe in Durham better (plus it would mean a shorter commute for me), but could also be happy in Raleigh.

I moved from DC to Raleigh. Obviously, Raleigh doesn't have nearly the city pace that DC does and I do miss the public transit options there. It's a nice change of pace down here though - no insane COL, no insane traffic/inefficient metro making your commute a living hell, far less politicized culturally.

I grew up in Raleigh but live and work in DC now.

I moved to Raleigh from NJ back in 2005. Still love it every day. I go back to visit family in NJ each year, but Raleigh is home now and that is just fine with me.

Raleigh is Pleasantville, USA. It's a great place to raise a family. Good schools, low crime, cute downtown that you can walk around in. If you want something with diversity and excitement go somewhere else.

Raleigh has everything that you seem to be looking for. Lots of breweries, bars, venues, outdoor amenities, and other young people. Since you are new to the area start off with a short lease (year or less) and explore, you can always mobe later. Regardless of where you decide, take your dog to Carolina Pines Dog Park off Lake Wheeler Road in Raleigh; I met plenty of people over the years who drove from Cary or Durham.

Raleigh's a great location! I'm 25 also. It's wonderful to be so close to both the mountains and the beach! The triangle homes a multitude of parks, gyms, lakes, and museums.

I love that place!