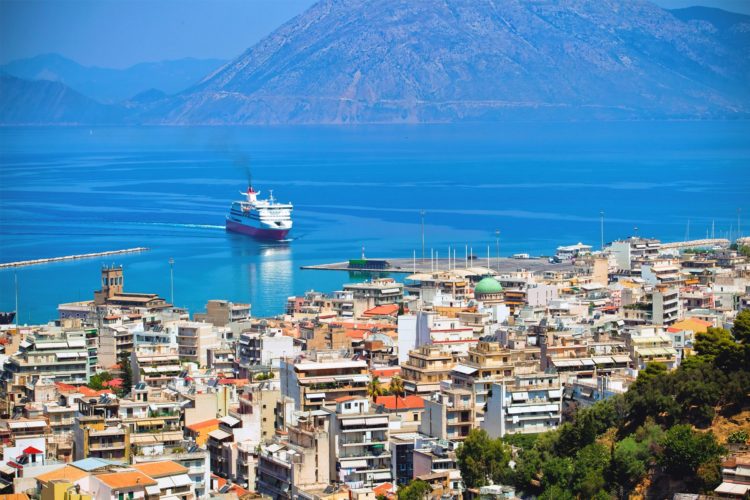 So you are coming to my town? Beautiful place, great geographical position, but shitty, depressed people.

I suggest bringing as much cash as you can with you. I've probably spent ~5 hours in Patra total so I'm not an authority on the matter, but from my experience bars, kiosks and taverns usually don't take credit/debit cards.

Hi there, I study there for the past five years and I can pretty much answer your questions:

What Error_404 said about prices and ATM, the 400€ you can draw will be pretty enough. But anyway since all these changes the last year, you can use your credit card everywhere.

I think the student card you own you will be able to use with train, with the busses it would be even more unclear. The bus is more expensive to earn just 45mins. The train is not actually a train cause the half route is with Athens suburban railway and the rest again on bus. Don't expect train qualities..

Patra also has a suburban railway and as already told is cheaper with monthly student cards and much better than the busses which are truly miserable to use. If you suffer from depression, Patras busses will kill you :P Also horrible quality for high price. Only the Express line for the university is worthy.

For summer the close beaches are good and easy to access with train or busses but not like those you see on net for Greece :D If you have company who owns a car then you will have access to some noteworthy beaches. Patras as a student city has mostly places for winter. Unlike Error_404 the center of Patras during summer is like he'll, too much humidity and too hot. As you can imagine during summer is empty city, but last 2years people are staying in the center. Blame less hot summers and financial crisis.

Patras's problem has nothing to do with Pasok. It has more to do with gradual lack of competitiveness that plagued most industries in Greece. A large fertile agricultural area around Patras produces a huge amount of fruits and vegetables of unparallel quality and taste. But as prices rose, more and more of these products could not be exported to Italy and elsewhere harming the local economy. The vibrant local wine industry (ie Achaia Clauss) also got impacted as Greek wines were pressed by competition. The textile industry (ie Peraiki-Patraiki) also closed down harming the community.

It is not only bad news however: the Rio-Antirio Bridge helped the economy greatly as goods can now be moved across the Corinthian Gulf from Peloponnese to the Mainland without the long wait for the ferries something that improves freight costs and travel time.

The tourism industry is extremely strong as this area is only of the most picturesque of Greece. Wonderful beaches and long stretches of orchards create an amazing background for holidays.

Patras has a great cultural life enriched by the very strong local university.

Patras is a port and attracts immigrants who want to get a ferry to Itally and migrate to Europe. Thus, the abundance of immigrants in the area that are also employed in the farms which raises a number of problems with the locals that think that the newcomers take jobs away from them by reducing wages.

City of students, with half of the population is student. Great nightlife (bars are open till early morning), nice beaches (both sandy and rocky), Good connectivity with Italy and island of Greece,Very friendly people, but now a days be careful in some areas in night to avoid unpleasant experience.

perhaps the third largest city in Greece. has many villages in the surrounding area can if you want to be visited. Excellent nightlife and many students who give color in the evenings.