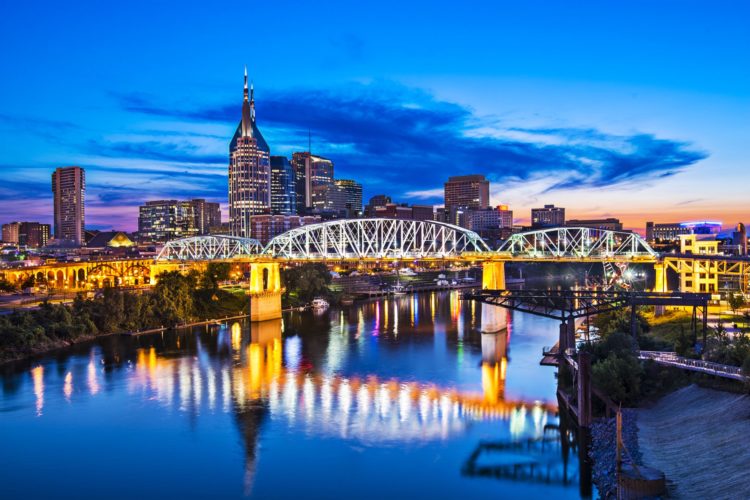 Nashville, Capital of Country Music, is nestled on the Cumberland River in Davidson County, north-central Tennessee. The city is viewed as being among the best places to live in the US. Along with its unrivalled music scene, the city has a lively nightlife, great restaurants, chic shops and loads of outdoor activities.

The people of the South have a reputation for being very hospitable and Nashville is no exception. People are warm and accommodating to others moving into the area. It is very easy to develop friendships with people who live in Nashville and many friendships become life long.

Nashville’s only form of public transportation comes in the form of bus lines via the WeGo Public Transit. It’s not entirely dependable and doesn’t cover all of the sprawling city. Plus, not only is public transit not accessible or comprehensive in this city, traffic here is also inescapable. With Nashville growing as quickly as it is, the infrastructure is simply not set up for the amount of cars on the road now. If you’re considering moving to Nashville, expect to sit in some gridlock traffic if you’re commuting to your job.

Like many large cities, Nashville has a traffic problem. That’s not unusual – but what is unusual is the lack of public transportation offerings, which makes it practically essential to have a car and results in daily traffic jams that may leave you wanting to pull your hair out.

Nashville is relatively affordable compared to other major U.S. metro areas, though the housing market has become increasingly competitive. The area has seen an increase in its population, as well as a rise in home values. Since Tennessee is one of the few states that doesn't tax wages, residents are able to keep more of their income, though there is a 6 percent hall tax on investment interest and dividends.

If you are going to work in Nashville then Murfreesboro is about a 45min to 1 hour drive each way to downtown during the rush hours. However if you get something on the southeast side of town, probably from the airport southeast toward Murfreesboro it is not too bad. The good news about Murfreesboro is there is an apartment building boom due to the growth of Middle Tennessee State University and some companies, (Verizion for one) that have moved into the community. I recently read the apartments are at about 92% capacity now and when the next three complexes open that will drop to about 85%. So there will be some real good deals and move in specials in the area.

A word of advice if you consider Murfreesboro. The university starts back at the end of August so if you are interested in the area I would look at maybe pre-leasing if you find something you like.

I'm not sure if I count as a transplant anymore but I moved here in '96 from Memphis to go to college (and stayed here ever since). What struck me the most about Nashville at the time was how welcoming Nashville was of outsiders, particularly weirdos who didn't fit in anywhere else. In Memphis, everyone was a native and the discussion would turn to what high school you went to (mostly to determine what neighborhood you hailed from for sorting based on class/family income) within 3 minutes of the conversation's start. In Nashville, it was about what brought you here. It seems small, but that was a huge difference for me and why I stayed.

Came here in 2010 for school stayed for work. Love the Size of the city, big enough to have something to do every night, small enough where I can escape to the country side in under an hour.

I'm came from the boonies so Nashville is like a mecca compared to my hometown.

My only beef is there are no good bagels and I have to drive four hours to get to the smokies.

Moved here three years ago from Austin, Texas to be closer to family. Nashville is equal distances to my parents and my wife's parents. The food scene in Nashville is way overrated. The BBQ here is meh and the Mexican food is worse. Traffic is awful but that's expected with any large and growing city. I get tired of meeting assholes who moved hear from Ohio, New Jersey or some other God forsaken state and complain how Nashville or Tennessee isn't as nice as the place they left. I enjoy living here for the most part. There is plenty to do and see. There always seems to be someone I know from out of town visiting which is nice. Most people are genuinely friendly. I like how Nashville has so many different neighborhoods, each with their own little vibe.

Nashville is so big I figured locals didn't go downtown. Gainesville has two streets for bars/restaurants. Main Street is downtown and that's where the locals go. And midtown is where the university students go. So I'm basically looking for somewhere that has a similar vibe to downtown Gainesville. A friend mentioned East Nashville.

Barbering and cosmetology are very different and unfortunately the state of Florida license doesn't transfer to Tennessee so we would have to go back to school. Which is why I'm "venturing" out. I would really like to work at a bar so that's good to hear.

Really glad to hear that about the music. The one thing I love about Gainesville is how good most of the local bands are and this city is really into live music.

Awesome. Thank you! This definitely helps.

Some people in this sub are not welcoming to nee people moving to Nashville. I’ve been here since this summer and have been coming up each year for the past 5 years or so.

I love it here. The people are friendly aside from the occasional asshole doing 85 in his pickup truck. The food is great, weather isn’t too bad.

Traffic is horrendous. Many people have moved to Nashville over the last few years, myself included. There is construction everywhere, including right next to my apartment which is spanking brand new.

Lots of events and night life.

If you really want to live in Nashville, West Nashville maybe a good spot to start like Charlotte Park/Nations area.

The Gulch is extremely packed and touristy but that may be the kind of spot you like.

Berry Hill/Melrose area may not be a terrible idea either. I haven’t lived over there for 5 years so I know it’s changed but it’s gotten better!

Paying about 1.3-1.6 a month depending. I used Nashville Apartment Locators. Super friendly and professional staff with knowledge of the city.

aw nashville is one of the greatest places, so happy i get to call it my home!! hope you had a fun trip:))

Ahhh I'm so happy that you came to Nashville!

I moved to Nashville in January. I FREAKING LOVE THIS CITY!

We moved to Nashville 10 years ago and it was the best decision of our lives! This place is a gem! Can't wait to see y'all enjoy it!