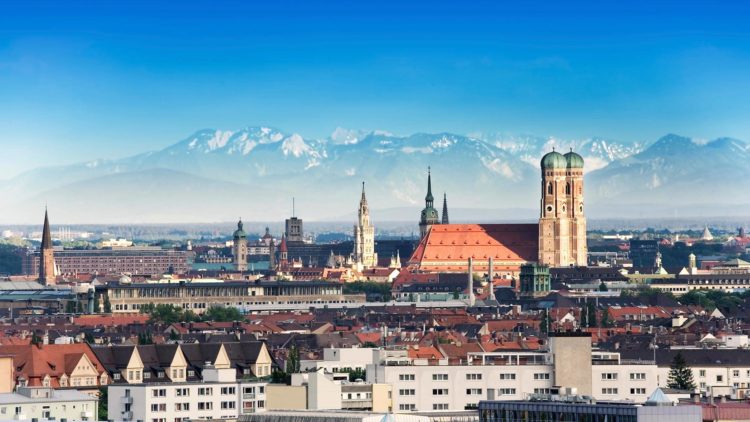 If you don’t know, Munich is not the right place to move to. The cost of living is high, rents are very high, and being an expat does not qualify you for anything in particular.

Munich itself is crowded and expensive, but there are dozen of towns around Munich where living is better and easier - especially with children.

If you are looking for a job in the city, the best ones are probably the towns with an S-Bahn station. I'd go for the towns with the white signs or closer to the center because the other ones are not as well connected. That's a commute of up to 30 min per train to the city center. Some of the stations are even used by regional trains, cutting your commute time in half.

That's the way of living, I'd prefer with kids.

Look for an S-Bahn station close to your office

Look for a flat in said town.

Munich, or München, is the capital city of Bavaria district in Germany. It is one of the popular cities among the foreigners to settle in Europe. With the population from different countries, today, Munich is a modern cosmopolitan city.

There is a perfect balance of modern lifestyle with the ethnic feel. The infrastructure facilities in Munich are up-standards. Also, in Munich, you can find excellent public transport from the metro, tram, local trains, to buses. Diesel cars are completely banned in the city center.

Hmm… Reasons to live in Munich?

Munich is a cosmopolitan city with a considerable international crowd comparing to other German cities. There are lots of international companies and one can enjoy a good quality lifestyle.

I like this city as a traveler also. There are tons of the things to see and do in and around the city. The education (schools and higher education) in Munich has one of the best qualities in Germany. This was an important factor for us as a parent of the school-going kid.

The prospect of moving to Munich attracts Germans and foreigners alike. Munich has one of the highest percentages in the country for residents who do not have German nationality; about one quarter of the city’s residents do not hold German citizenship. There are also many second-generation immigrants, former migrants who have obtained German citizenship, ethnic Germans from Eastern Europe, German citizens with more than one nationality, etc.

The biggest foreign communities consist of residents from Turkey, Greece, Italy, Austria, Iraq, and various Eastern and Southeastern European nations, with many people also hailing from France, the USA and Britain. Even if you are not from one of these countries, you’ll probably find some compatriots after moving to Munich.

But how to get the right visa and work or residence permit? What about finding accommodation? The following parts of our guide on moving to Munich can help you out!

I moved to Munich two years ago and although I knew Germany (and Germans), to make Munich my new home was not easy. After the painful and stressful process of finding a place to live, a few more surprises came along. Some were good, some not so much.

I'm heading to Munich for Oktoberfest and was advised to try and wear the authentic Bavarian clothing to "fit in" but am having the hardest time figuring out a good location to find a proper Dirndl in the city. Any suggestions or tips for finding something moderately priced and easy to get to? Thanks for all the info on the blog.

If you can cross „Moving to Munich“ off your to-do list , you made the perfect decision – whether you are a student or if your work brought you here and your stay will be longer than just some semesters – you will just love this city.

Green spaces and parks (about 20% of the total area of Munich consists of parks), friendly people (if they’re a real „Münchner„, someone who’s born and raised in Munich – there are not as many of this kind as you think, if they seem impolite, they’re not really), the Bavarian way of life, rural character („Munich is a big village“ – you will hear this saying a lot of times and it’s true!), and the proximity to the Alps are some of the factors that make life in Munich so unique.

If you were unsure before about whether you should move to Munich or not, after all these first pieces of information, you will find no reason why not moving to Munich.

Are you a student? Great for you, as Munich is home to several world class universities as well as universities of applied sciences.

Are you looking for a job in Munich? Awesome, Munich has many very well paid jobs from the service industry to high tech companies. Best of all, wages in Munich are higher than in most other German cities.

Are you planning to enjoy life? It is your lucky day as Munich will keep you entertained for years. And for all others, you will also never be bored in Munich – that’s guaranteed! The time is right for all of you to prepare moving to Munich now.

I've visited Munich and I loved the fact that there are so many green and open spaces!!

More than just the Oktoberfest! Moving to Munich is an appealing prospect: Germany’s third largest city boasts a relaxed ambience and a thriving economy. If you have succumbed to its charms as well, check out our expat guide to Munich, with info on the city, visas, permits, and housing.

Munich is one of the most popular cities in Germany: located in Bavaria where King Louis resided in the most fabulous castles, within sighting distance of the rolling hills rising into the steep mountains of Austrian Alps, with crystal clear lakes and a lot of sunshine. Not without reason, this monarch has been called the fairytale king. The landscape around Munich is so stunning you hardly believe it is the reality. Munich is thriving with international businesses, and you will find a very active expat community here, socializing and helping each other out.

Been to Munich countless times and visited the Wiesn on 15 occasions so really love the place. Currently we're travelling the world and living just outside the city in Zorneding for 4 weeks. Didn't know the difference between a biergarden and a wirtsgarten so will remember that now. Going to get on and read the rest of your site now, looks very interesting. Jonno.

My husband and I have been to Munich 3 times and we love it there! One of our most favorite spots to get coffee, or an Aperol Spritz, is at the Cafe Nymphenburg. Just reading your post makes us daydream about returning someday soon :)

Hey! In my opinion Munich is the most beautiful city and worth living there. As english speaker you will have no problems there. Munich is a multicultural city and most people speak decent English. The most important thing is finding a job first. Some companies will help you finding an apartment, so don't forget to ask with your job application/interview. Otherwise you will have trouble to find an affordable apartment because it's a mess in Munich. Good luck to you!

Munich is safe, cosy, green and versatile in activities. Public transport is decent and most places are accessible by bike. Both local and international cuisines are rich and affordable (compared to international levels).

So yes, definitely come live with us, you'll like it, it's beautiful. But: Plan at least one to two months of staying in Airbnb or Zwischenmiete to find a flat (and more like half a year if you can't be here in person, limit your advances to e-mails, or aren't willing to pay a Makler). October, when uni starts, is the worst. Spring to early summer are better. Go get a German SIM card/number as early as possible.