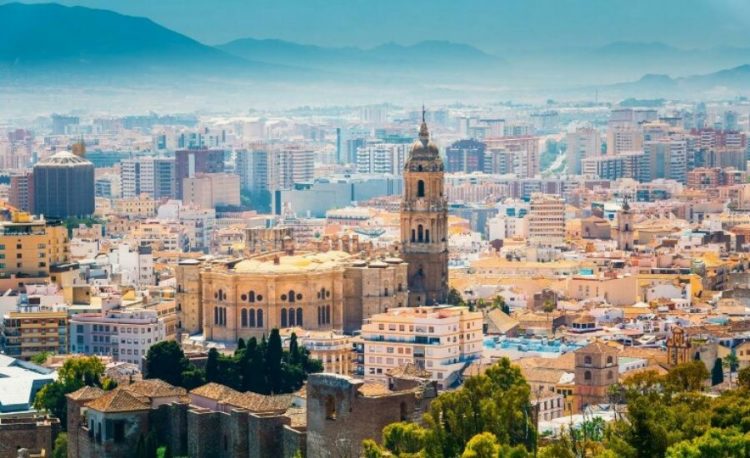 Malaga has a subtropical-mediterranean climate which provides warmer summers (average highs of around 30 °C) and milder winters (average lows of around 7 °C) than London. Malaga sees comparable rainfall but it almost all falls between October and April, leaving the summer months free of London style drizzle. Malaga’s average 2,815 annual hours of sunshine is almost twice as much as is seen in the UK capital.

As well as property prices and rents being lower in Malaga the overall cost of living is also much reduced. You’ll pay less at the till for groceries, utility bills will leave your bank balance in better shape, getting around will leave more change in your pocket and eating out doesn’t need to be rationed like it does in London.

While Malagans experience less pollution than Londoners and spend less time commuting they also report themselves as feeling less safe and experiencing lower standards of health care, on average.

In addition to its many historical sites, Malaga is also home to the Pablo Picasso Museum, having been the birthplace of the famous Cubist and plays host to many festivals and fiestas throughout the year. The most famous of these is the Feria de Agosto (August Fair), a ten night celebration with music, dancing and bullfighting.

Some six million people visit Malaga as tourists every year, so during the summer months the population of the city and surrounding area is much larger than in the depths of the winter. Spanish is the dominant language but many locals have a firm grasp of English too.

Since the 1970s the number of expatriates moving to Malaga has been on the rise, with a large number of British and German nationals now calling the Spanish city home. Many expatriates in Malaga choose to stay near the coastline rather than in the city center.

Roman Catholicism is the dominant religion in Malaga, although there is also a substantial Protestant population living in the city. The Church of Jesus Christ of Latter-day Saints is becoming increasingly popular in Malaga, and Islam is also on the rise with more mosques opening in the city. There is a synagogue and the Jewish Association has a presence in Malaga.

Integrate! Put yourself in uncomfortable situations daily where you’re forced to learn the language and talk to local people. Málaga is a beautiful city, but its best asset by far is its people - Malagueños.

Avoid the temptation to join an expat community. If you can get to know the locals, you will make genuine friends for life.

If you’re looking to move to Málaga, the best time to do so is in the spring – after the Semana Santa (Holy Week) celebrations – or in the late fall, between October and November. May, June, July, August and even September count as the high season here in Spain, meaning rent prices go up immensely. Many properties only offer short-term rent contracts, usually from October until April, after which you will be forced out on a house-hunt again. With the rise of Airbnb rentals in the region, it has become increasingly difficult to find cheap, long-term apartments as owners are favouring holiday-letting for a higher profit. It is highly advisable to secure a job before you make the move to Málaga, as steady employment is very hard to come by unless you have an established position within a company.

When I came out here I spent the first two years job-hopping and was surprised to see that, in many cases, qualifications and resumes weren’t even skimmed over. Many employers are far more interested in you, and how you sell and present yourself, than they are in reading about your past experiences. I blagged my way into various jobs I never would have got without the right qualifications in other countries, and now have quite the colourful resume – I’ve worked as a dental assistant, a real estate agent and a decorator for a popular radio station, with no prior experience whatsoever.

Or not as it turns out. Malaga isn’t nearly as clean as Marbella and people seem quite happy to throw their litter on the floor even when there’s a bin nearby. But maybe there’s hope – my mother-in-law who first arrived in Malaga in 1959 assures me that things have improved drastically.

2015 is definitely Malaga’s year. Thanks to a pretty long list of cultural attractions the city has been touted one of Europe’s most up and coming travel destinations. It’s even been christened the new Barcelona. I’m just hoping the new-found fame doesn’t go to Malaga’s head and that it remains as authentically Spanish as ever. Even if I can’t understand what they’re saying and there’s litter everywhere.

Im a Finnish living in Malaga, weather here is obviously great, although since there isnt AC in this place, summer for me is pure hell and I decided to stay away the July and August the folowwing years... But may not be a problem for you. Winter time temperatures are perfect for me here, so at no point of the year am I ever feeling cold. So weather is definitely great here

What I like about Malaga is that there is airport nearby so its easy to travel from here and there are many places just nearby Malaga that are great to visit and see. Ronda was especially fun place to see and I like visiting Nerja sometimes as well

Dont know about the Spanish people though, I have had bit mixed results myself, one taximan even attacking me physically but technically that was in Torremolinos. But otherwise, this is a pretty good place to live and very safe. I roam around the streets at nights by myself, sometimes in centro but usually in other places. Never ever have I had any problems with safety or anything. Never.

While there might be some pickpockets here, beggars and all that, I doubt its anything like in Barcelona. But this is just my guess

Rents are bit more expensive in Malaga than in some other places that I have watched though...

All in all, its a good place to live in my opinion. Not very informative post necessarily, but just wanted to share an opinion/experience of another expat living here in Malaga. If you do end up moving to here, I hope you will like it

If you speak Spanish staying in Malaga might be nice. Fuengirola has many foreigners, which can also be nice if you don't speak Spanish. There ARE a lot of tourists but they can be avoided, and with them you get a LOT of bars etc. If you like a lively nightlife stay in Fuengirola.

Málaga is a Spanish city. The other two are important towns in the 'foreign' firmament. Fueng has a huge number of British residents (mostly retired) and a large Swedish colony in next door Mijas. Marbella is an international resort/playground for the rich (See Puerto Banus etc). All good fun, if you like to drink. To learn Spanish - stick to Málaga (or somewhere inland).

All this coupled with it’s near perfect climate, beautiful beaches, great eating places ( traditional, modern and ethnic), superb theatres and of course the many festivals (from religious to jazz to film and book) guarantees that whichever month one decides to visit Málaga there will always be something exciting happening.

As for Málaga, it's a beautiful city

As an update, Im in Malaga now and it is much better than Barcelona, the city is actually charming, everything is close, fast and easy, women are prettier, it's cheaper, calmer, I can sleep here and the people here are so warm and friendly and it does feel like the total Spanish experience. Thanks!

My time in Malaga was really short and I only drove by Fuengirola on the highway, I am just finishing up my first year, possibly going to Lorgono next year. If so, good luck with the program! It has its ups and downs but overall the experience is amazing.