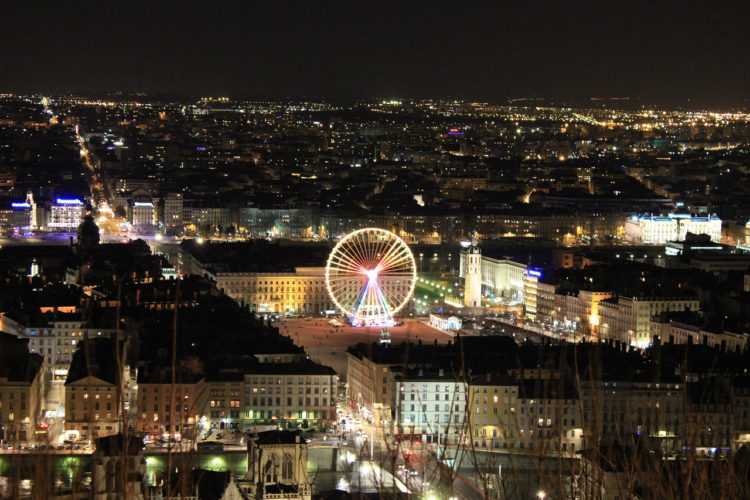 Lyon may come second to Paris in terms of population and wealth, but it certainly doesn’t live in the shadow of the French capital when it comes to culture, beauty, and personality. The city where the Lumière brothers played midwife to early cinema, where gastronomes delight in the restaurants of master chefs, where wine connoisseurs are spoilt with the riches of Beaujolais and Côtes du Rhône, and where historical and architecturally stunning sites abound has much to offer the new arrival.

Mornings in Lyon are meant to be spent enjoying an espresso and a tartine with jam, perhaps at Pain et Cie, a microchain with a location at 5 Rue des Quatre Chapeaux (Yes, that translates as “The Street of 4 Hats.”) Then take a walk along one of the rivers to get some inspiration for your next novel, to learn some skateboarding tricks, or simply to people watch.

For lunch, duck down one of Lyon’s side streets for a feast at a local bouchon. Warm up with traditional local dishes such as andouillette (a sausage of coarsely cut tripe), quenelles de brochet (a dumpling made with pike in a creamy sauce), gras double (tripe cooked with onions), salade lyonnaise (lettuce with bacon, croutons, and a poached egg), and marrons glacés (candied chestnuts).

Lyon is home to around half a million people (as of 2014), with the local population speaking French. Although many people have a decent grasp of English, making an effort in French is always appreciated. Lyon has the second-highest populated metropolitan region in France, behind only Paris.

Around 15% of people who live in Lyon were not born in the city, while both the median household income (36,235 EUR) and median family income (45,573 EUR) are above the national average.

Lyon's population is rising again but is still some distance below its peak of close to 600,000 in the 1930s. The population has risen by around 100,000 in the last 20 years and over two million people live in the Greater Lyon metropolitan area.

Temperatures can reach very high figures during the height of summer and it is not unheard of for the mercury to pass 40°C during August.

Lyon has a climate much of its own as it lies between the subtropical Mediterranean climates to the south of France and the Temperate Oceanic climates of northern France.

The winter months tend to be the driest months for expatriates in Lyon, although it is not uncommon for there to be snow in the city during December and January, when temperatures can drop below freezing and stay there for some time.

Lyon is actually quite nice. I loved it. You could do a lot worse when it comes to France! You're 24, give it a shot. Start with taking French classes is my advice ;-)

Lyon, having been built over 2,000 years ago, is classified as a UNESCO World Heritage site. Yet, this isn’t a city stuck in the Dark Ages. Even though some of its civil and religious sites go all the way back to antiquity, Lyon keeps up with the times and offers plenty to see and do for the international student who just can’t wait to see what France’s second largest city has to offer. In fact if you’re a foodie, you’re most definitely in the right place, as Lyon is known as France’s gastronomy capital.

Needless to say, Lyon is popular amongst students, with the busiest months being May through July. When planning to relocate to a room or apartment in Lyon, these are also the most expensive months to purchase flights, so try to plan accordingly.

I married a French girl and we moved to Lyon for my job. I first arrived in Paris which is great when you are young and don’t mind living in a very small apartment but once you have a family and a decent job, it just becomes too expensive. We were based in Strasbourg for my job for a while, it’s a beautiful place, with a very strong identity and very different from the rest of France. We moved to Lyon in 2007 and we love it here, it’s a good compromise between Paris and a small town like Strasbourg. It’s big enough not to get bored and have plenty of choice for restaurants, cinemas, day trips etc but small enough to walk everywhere. We have a 2 bedroom apartment with a balcony and garage. We’re in the city centre but not right in the centre, so it’s not noisy and we can still walk everywhere.

Lyon has such a great quality of life it’s surprising when you first arrive here. There are two rivers, a huge park (the largest urban park in France), several different districts which are very interesting, fantastic food and wine and a nice climate. If you ever want to get out into the countryside the Beaujolais and Ardeche areas are close by. There are beautiful lakes such as Annecy, Aix les Bains and Aigebuelette to the East, volcanic scenery in the Puy de Dome area to the West and Roman towns South of Lyon such as Vienne and Avignon.

I started in lyon on that salary. It was enough to live, enjoy the city (although I don't eat or go out often), and save a good chunk. 3 years in I had about €30k saved and used it to buy an apartment with my wife.

Also yes you can forget about the car. A monthly metro/bus pass costs 63€ which should be half covered by your company, and there are plenty of shops in-town for groceries. Actually when my fridge is empty I go shopping at Carrefour in Part-Dieu, because it's metro-accessible and they offer to deliver your groceries at your place for free if your bill ends up more than 100€. I literally go and leave empty handed, they take my stuff after i paid for it and they show up at my door up to 3 hours later.

You don't need a car in Lyon. The public transportation system is quite good, and in dire straits it takes 40 minutes to walk from one end to the other.

I'm a Lyonnais who lived for a year in the United States (Oregon) as an exchange student a couple years ago. And since then I've hung out with a lot of US exchange students in Lyon, some of them becoming close friends. Overall, they really liked their experience here, for various reasons. Some loved the food, the night life, the human size of the city, the bars, I'm sure you'll find something too.

Hey, Lyon is my hometown, so I might be biased. But it is totally worth it. I agree with was said earlier, also I'd add la rue sainte Catherine, it is a bar street cheaper than le vieux Lyon which is tourist ms heavy especially during summer months.

You can visit les traboules, le vieux Lyon... Le musée galli romain and the théâtre gallo romain with the hills of fourviere are especially beautiful, maybe you can also enjoy les nuits de fourviere as well (spectacles and concerts there in summer if it is still on) Le musée des beaux arts and le musée de la miniature are really nice ones.

The comment above seems to state to take care of pickpockets but to be honest it is not that dangerous, not like Paris. But still awareness is needed anywhere anyway.

Lyon by itself is not very extended, you can easily walk for going to work. For exemple, your need ~30 minutes for walking between the métro stations République and Part-Dieu (look for them on Google maps !).

Also, Lyon is pretty nicely mapped in OpenStreetMap, so you can check the amenities.

Lyon struck us as being a smaller version of Paris, if you were plonked down there you'd suspect you really were in Paris. And it's generally a little warmer as the warm southerlies push up from the mediterranean. It's big enough to have everything and the food is fantastic, as well as it being fairly easy to get around because of the Metro. We loved it. We are thinking of going again next year for about 5 weeks. The Alps are close by if you're into skiing.

Cost wise, I would suspect that it would work out cheaper than living as a student in Paris, but you'd have to find that out from a local.

There is a /r/lyon which may get you a little extra information.

i was just in lyon and definitely feel like it'd be a nice place to live in. beautiful, with a good restaurant scene, nice bars on boats by the river, and since there a lot of students it's got a nice energy to it. plus you're close to a lot of beautiful parts of france; not just provence but l'ardeche.

Located at the confluence of the Rhône and Saône rivers, between mountains and the sea, Lyon is almost considered as an island. As a rallying point between Northern and Southern Europe, the city is a major economic and exchange hub.

As France's third biggest municipality, Lyon attracts expatriates in large numbers every year. It will probably charm you by its global reach and its developing sectors.

Lyon is an inspiring and beautiful city to live in. A rewarding hike up to La Basilique Notre Dame de Fourvière reveals a visual cornucopia; the Basilique’s unique octagonal towers gaze out across the ancient city’s fusion of Roman, medieval and utopian architecture to the Croix-Rousse in the Rhone-Alpes region