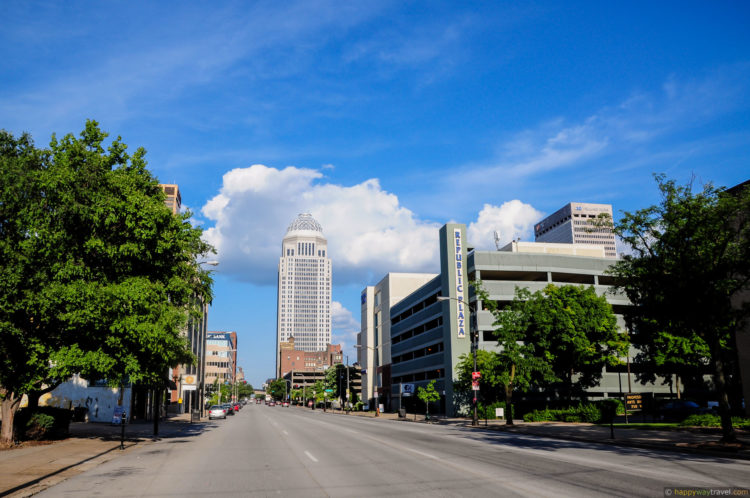 loo-vll was my home for all of 2016, thanks to a desired job transfer. for a small city compared to so many large ones i've lived in (l.a., atlanta, houston), it sure has a lot of traffic congestion. one can bet on a bad wreck on the watterson expwy @breckenridge just about every day @evening rush hour. how did the wrecked cars get into the positions that i saw them in when i crawled on by? folks not desirous to make friends; i only knew the first name of 1 person in the entire apartment building the whole year that i lived there-and i'm hardly shy. they went out of their way to avoid contact-it was weird. no bicycle trails to speak of; i'm quite the cycling enthusiast, but once i started to work from home, i blew this steamy hot dump to move to dayton, oh the cycling trail mecca of the u.s.!

Well, I wrote a post for Louisville earlier, but I'm not sure if it posted. So if this post sounds like another post I did, it's because I didn't think my first review got posted. So I will apologize for that.

I would like to comment that Phil's post is absolutely true and I appreciate his candor. Louisville is very racist and there is a lot of social pressure to maintain this racism. When I lived there during my high school years and young adulthood, I was often ignored or excluded, because I was Asian. My impression is that anybody who is not white is treated this way. I have heard a couple of mumblings from different persons in Louisville that Asian people are there to take advantage of welfare or funding programs. My parents have never accepted any welfare or any kind of free money. Even though my brother is disabled and could qualify for disability funding, my parents never thought of applying for or accepting any type of funding for my brother. All my parents ever did was work. To tell you honestly, I think people just start these rumors just to have an excuse to shun or look down on other races and this is due to social pressure. If you are a white person seen associating too much with persons of another race, you may be excluded in different social circles, as well.

Also, there is a great deal of competitiveness in this town. People are continuously sizing you up on your socio-economic status and who you know, so they can decide how to treat you. Also, people get jealous, so you may be talked down to, as well, if you have too much going for you. I have been asked before who my mother and father are. Basically, this question is to help the person determine if you come from old money, so that individual will know if he/she should even be seen associating with you.

Louisville is not bike friendly lol. There are very few if any bike lanes anywhere and people here are still not used to seeing bikers. I stopped after I was hit twice. Could just be my experience but many other city's are much better for your average biker.

Don't forget the constant smell of sewer in many areas. Especially around old Louisville (although I don't really mind it too much, very minimal)

I agree with the positives let me a add a few more.

The city is not extremely conservative or liberal. There is a bit of both.

It is a relatively historic city. especially for this part of the country.

Public transportation sucks! It will not get you where you want to go and even if it does you won't be on time.

Allergies! !! When I first moved to Louisville I was asked "do you have allergies? " me: "no" "you do now!"

And boy were they right. This region of the country collects allergens and pollution. You won't breath the same here

Welcome! I hope you join us.

Sitting along the Ohio River, which divides the northern and the southern U.S., Louisville is a modern metropolitan area steeped in tradition. Each neighborhood offers unique things to do and carries its own dialect. While Louisville certainly exudes the charm befitting a southern area's reputation, the vibrant music and performing arts scene, desire for competitive innovation and farmers markets superseded fried chicken a long time ago.

Learning to pronounce Louisville correctly is the first step to becoming a real Louisvillian. "Lou-uh-vull" (with the "Lou" and the "uh" slightly combining) is the correct pronunciation.

Louisville is an awesome city! I am a born and raised native who moved away for about 7 years, but I came back. It is the “biggest small town in America” and rightfully so. The people are very friendly and we definitely supply Southern Hospitality. You can get a small town feel from almost any of the incorporated cities (like St. Matthews, Highview, Prospect, Jtown, and more) but you can also get “lost” in the big city life (at least for Kentucky anyway!).

Louisville has some of the best food selections in the country and rivals big time foodie cities like New York and Chicago. You can eat out whenever you like, eat food from almost any part of the world you can imagine (like a true middle eastern falafel at Al Watan Bakery in Hikes Point, or authentic Ethiopian fare at Queen of Sheba near Bowman Field), and never even have to think about a “chain” restaurant (you just have to know where to look!). We even have an authentic Irish restaurant in the Irish Hill neighborhood who’s owner hails straight from County Clare.

If you like night life, ours goes until 4am most nights, and every part of town has a plethora of bars, restaurants, and activities to enjoy. Around Derby time we can put Mardi Gras to shame! The entire city becomes one big party for two weeks leading up to the “Greatest 2 minutes in Sports”.

There also aren’t very many places where you can walk through downtown with the lights and sounds of the city, but in less than fifteen minutes you can be in a park with a serene creek and nature walk.

Louisville is an awesome city to live in, and I wouldn’t trade it for the world. I may be a little biased, but I think ou can’t go wrong here. Our slogan is even “Possibility City”. Check it out, I am sure you won’t be disappointed!

I have lived in 4 different neighborhoods in Louisville and have loved them all. Life changes are the reasons for the moves. Land, depending on the neighborhood, is extremely affordable comparing it nationally. Housing is great. There are neighborhood watch groups in most communities. People are friendly (I know most of my neighbors on a first name basis.) My experience with the police is that they are friendly and helpful (this can be an issue for some, but my experience has been good.) We have many things to do from free to some cost. Great parks (all free) to walk, jog, ride a bike, play ball (basketball, soccer, baseball, etc.) A walking bridge (free) with great views of the Ohio River.) Great museums (at a “reasonable” cost.) Fabulous restaurants (varied in type of food and cost.) One can get almost anywhere in the city in short time (unless it is a busy street during “rush hour” and even then it is not awful. Louisville is fascinating, friendly and reasonably cost wise. It is a great place to visit with children (so much to see and do,) loved ones or alone. If you just visit, welcome!!! If you move here, hoping you love it as I do!!!

I LOVE Louisville !!! …Louisville is a large city with a small town feel … people like to drink in Louisville (Bourbon is a major commodity)… Eating is another great thing in Louisville, there are so many great restaraunts (a taste for every appetite) … Most people are very friendly … Louisville is a very friendly town… I came to Louisville 10 years ago because my (then) husband was sent there to work on the UPS world expansion and I fell in love with the city so we stayed… I still love it !!! …

Louisville is a pretty cool city, the east end that is, as long as you stay to the east side you'll be good. The west end, well is not for the feint of heart. The hookah bars in Louisville are pretty great, fun to go to and hangout with your friende. The highlands has to be my favorite, it's the type of place that you would call a hippies wonderland. Downtown is pretty great too, lots to do all the time