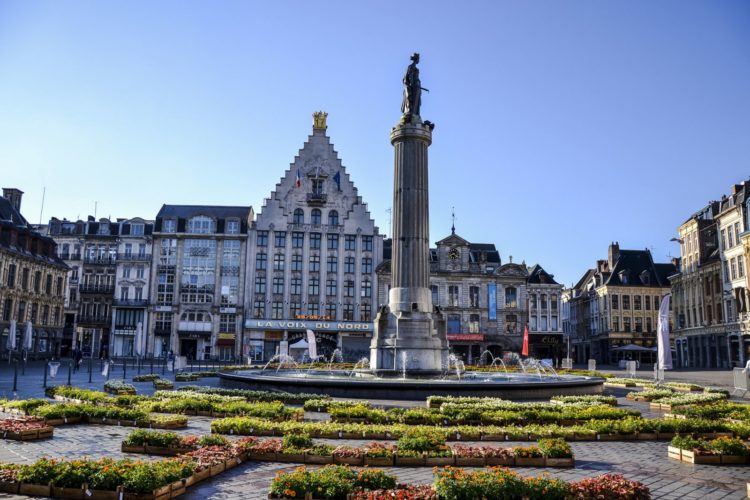 Absolutely dreadful; almost certainly the biggest shit-hole in western Europe, literally: there is a very large homeless population and no public toilets, the council just sprays sweet-smelling pink stuff all over the streets. We went there as a school trip and a few people in our group got mugged in the middle of the day, 3 girls tried to mug my cousin but thankfully she got away, we went to a bowling alley that clearly turned into a brothel at night (poles on the bar and a sign pointed upstairs saying VIP, surrounded by provocative pictures), at the hotel all the vegetarians just got a deep-fried block of cheese and some salad very night, and being so close to the Belgian border I think a lot of the shops we're focused on thinks that are hard to get in Belgium; there were a lot of sex shops and ... uh... "pharmacies", in summary: worst trip ever, but this was about 9 or 10 years ago, maybe it's improved since then.

Hi guys, I grew up in Roubaix, went to school there and my entire family is from Lille.

I think Lambersart can be nice, depending on the area. One thing to remember is this entire area (roubaix/lille/etc..) was very strong when it was a big center for textiles mostly during industrial revolution

(early 20th).There is a strong history of different waves of immigration to help out with the textile industry.

It has tons of very pretty mansions where the industrial bourgeoisie lived etc. The area went downhill and struggled quite a bit, but some of the cities have turned around and have really recovered. Lille is one of them, Roubaix much less so.

Big town for merchandising jobs (la redoute, 3 suisses, castorama, Auchan, etc.. a lot of the big names are in Lille).

Transportation is very good, but there are some not so good area to just avoid. Roubaix is definitely one of them. Tourcoing can be rough in some parts, some suburbs of Lille.

La Madeleine has some very pretty brick houses and is closer to Lille centre, and right on the tramway.

The vieux Lille is great, my fave, but I dont know if I would choose that for a family with kids. definitely practical if your hubby is studying though.

It never gets awfully cold/snowy like Chicago does (that is where I am now) but it is really rainy. A lot of white/grey day where you feel you are in a bubble.

Summers are rarely steady hot..You get lots of off days. But if you are there for a few years, there so much to do.. you probably will still like it.

The saying is that peoples' heart in Lille are warmer to make up for the cold.. It is true.

The city itself is beautiful. My friends visiting use to laugh about how there was ALWAYS something going on every weekend on the Grand Place.

if you have a car, you can do some really cool day trip (le touquet, bruges, brussels) and then it is also a big tgv center Paris in train in 1 hour, London in less than 2 i think.The Eurostar and Thalys stop there.

If you have specific areas in question after the trip, I can always ask my parents or sister.

From what I know and heared is that Lille is the cultural and economic center of northern France, but is in a very poor region. It is like "a Island of hope and civilisation in the middle of a sea of waste and dispair".

I'm from the area and as much as it pains me to agree with /u/goeie-ouwe-henk, he's right.

Lille is a fantastic city, but the Nord in general is pretty crap. You'll find some nice green areas if you're into forest trekking or whatever, but it's mostly poor/unemployed/isolated. It's even worse in the other "cities", like Maubeuge or Douai.

Even the suburbs of Lille (Roubaix, Tourcoing) are shit, and potentially dangerous.

Might be late but I live here :) Very beautiful but some cities are really poor ( Roubaix ) so you don't want to hang out there late at night. The weather is not that great but you'll get use to it. Otherwise people here are very friendly but do not talk english very well.

Hi there and welcome to Lille. I've been here for almost a year and it can be tough without knowing a lot of French. Luckily I've had my French girlfriend to guide me.

Do you know the Cafe de Paris event on Wednesday nights? It's organized by the Lille International Friends group on Facebook. Between 8pm and 9pm, people from all over show up at the Cafe de Paris on Rue de Paris. There are a lot of Spanish speakers as I remember and some English, French, German and others.

My girlfriend is studying to be a French teacher and loves speaking Spanish. If you wanted to meet for a drink sometime, I'm sure she'd love to find out about what it's like making it as a language teacher.

I know Sallaumines near Lens, I did the most part of my studies there

I know the Australian bar at Lille where they love to hire English speakers. It depends on what kind of job you are looking for. Anyway, I hope it will be a help for you

Go to the "Manpower" recruitment agencies, they could be very interested by your language skills and they can find for you a lot of jobs in different fields.

Let me know if you need anything.

I'm a "ch'ti" expat in Melbourne

Lille is great. It has a vibrant cultural life, lots of younger people, a nice "local flavour", cool architecture, and very friendly locals.

You're also super well connected - Paris is 1h away, London, Bruxelles and Amsterdam aren't far either.

I haven't been there in forever but you'll surely get more info on /r/France (you can post in English).

That's not exactly a good description, because Lille is actually one of the best cities for a student in most french rankings, and yeah the region is a bit poor because it's a former industrial region but when you're a student in the city you don't need to visit the entire area.