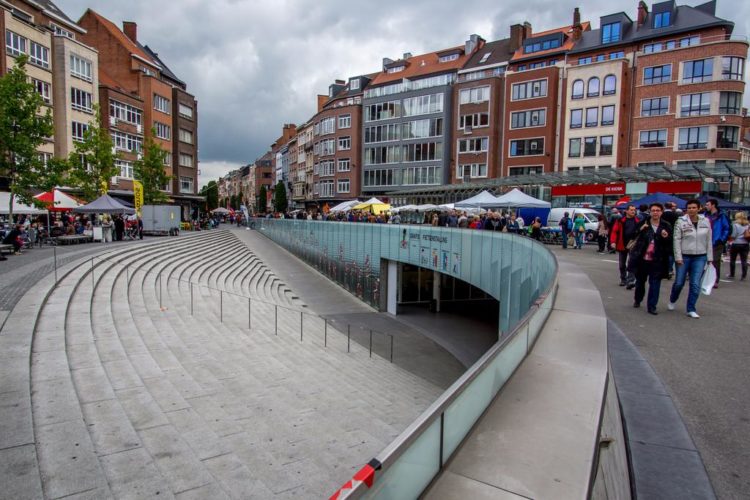 A lot depends on your budget. Here in Belgium, de "kotencultuur" is quite widespread. It's a bunch of students (who don't really know eachother) who live together in groups of 3/10 in one house, and often share a kitchen and bathroom together, having private sleeping quarters with a small desk in it. It can work miracles and make friends for life if the co-housers are your cup of tea, or it can break you if they are your polar opposite. With a bit of cherrypicking and luck, you can live very well for very cheap using a kot. Trouble is that the good koten are often already being chosen today for next year, so when you arrive late (which I assume you will, since you're now in India), you're left with the scraps & crumbs.

Elder students I found are more fond of small studios which have everything private (so small kitchenette, small bathroom, bed, desk,...).

As already said, make sure to check for the Kotwijs-labels, which means the housing is in order with the regulations, and you're not being scammed or forced to live in a "krot" (slum).

Talking about scamming: avoid private residences managed by the family Appeltans, or managed by Verimass. The former is a well-known landlord here in Leuven, with a mythical reputation of scamming people out of there money, and having dodgy houses, the latter is an incompetent immo-office who also is very shady with rents and deposits.

Leuven is small, VERY small. Location where you stay doesn't matter, as you'll get to your campus in a few minutes by bike or foot. Inside the ringroad (Leuven-centrum), prices tend to be higher, and in the city-center it can get busy and noisy, especially on Thursday nights (party-night). A calm quarter is the area around the Kapucijnenvoer. Outside the ringroad (Heverlee, Kessel-Lo) it's generally quite kalm, and less expensive to live.

Around 10% of residents in Leuven are foreigners, so there is no problem getting around with English only. My Dutch is very limited and I've never experienced any difficulty. Many restaurants have menus in English, and everybody speaks at least basic English.

Hi Maya,
We just moved from Canada with kids the same age (8 & we also found the schools in Belgium very dark and dingy. We were used to bright new buildings. I guess you'll have to look through this.
We chose for a public school where you can pick and choose which religion they are being taught (catholic, moral, neutral, islam, ...). Academically all schools in Belgium are pretty much at the same level. I must say that I find the schools more organised than in Canada, they have to learn a certain topic and are tested and get marks. I have no experience with special needs but I'm sure you can just call or email the school of your choice.
We don't live in Leuven, but just accross the language border in the Walloon region. We chose a small village so the classes are smaller and the teacher has more time to spend with the children.

Originally from Belgium, we moved last summer from Maryland to Leuven. We have 3 children so we went through the same process of finding schools.
We decided to send our children to Heilig Hart ( ). It is a big primary middle and high school. It is catholic and the academic level is indeed very good. The catholic part is not that present. They do talk a bit about religion but they have lots of students from other religion as well and everyone is very tolerant.
We choose for this school for 3 reasons:
- We are in contact with people at the University of Leuven (1 of the best in Belgium). It is known there that students coming from Heilig Hart have high success rates. So the level is very good at heilig hart.
- Being a primary, middle and high school is a big advantage for us. We know that the kids won't have to integrate into a new school again (we've done that 4 times in the past 5 years, it's enough).
- Being a big school has the advantage that they have many students of foreign origin, so they are prepared and organise to welcome english speaking students. Plus our children made friends with other children speaking english. That's nice to keep up their english. And even more nationalities (lots of expats in Leuven), we love the fixity.

Regarding the special needs: I don't know whether Heilig Hart has programs for those kids. A quick search showed me that there is a school named Ter Bank (in Heverlee, close to Heilig Hart): . Special needs translates into Buitengewoon onderwijs.

Finally, Heverlee (right next to Leuven, within walking and biking distance) is a great region. We are buying a house there (so far we were renting).

Hoping you'll find this helpful!
Good luck and don't hesitate to contact me if you have more questions.
Gaëtane.

Hello G,
I hope that you go for your visit. I honestly think the city is very charming and you will be surprised at how friendly it is towards foreigners. While I have not lived in Germany, I do think living in NL and Belgium is easier for English speakers because English is widely spoken among the Flemish and the Dutch. Did you learn German? I thought learning the language made it easier to fit in.

We moved for a research post-doc with KUL. Due to the size of KUL and the fact that Leuven is very much a "college" town you will likely meet lots of locals and ex-pats. Leuven is close to Brussels, with great train access, super bikeable, and has a lot of things going in during the year. If you have time during your post-doc you can take Dutch classes at the ILT within KUL. I think attempts at speaking the language are appreciated, but you will find that once people hear an accent, they will switch automatically to English. I do think that Belgians appreciate others trying to speak their language, but they are also realistic. Once you make friends with Belgians they are your friends for life.

In terms of utilities, the major companies (Luminus, Telenet (internet), and VZW (water) will speak with you in English if you ask first in Dutch, and they will say they speak a little and then they will be entirely fluent. As for stores, I think they are much less friendly than the Irish or Americans, but I think this is less about friendliness and more about being reserved. However, I can commiserate!

I live in AL (in the US) now, and let's just say that I felt more at "home" in Leuven than I do here. If you go, please let me know how it goes for you!

Everything in Leuven can be done on foot. Not sure if you know how to ride a bike, if you don't I'd recommend to learn it to get around a lot faster, going from one side of Leuven to the other takes around 10 min on bike.

Leuvan has a large university and is a very mixed town and I am sure you will survive at least to start with rudimentary Dutch.

Learning Dutch will help you settle in and open up the community and social scene to you. I visit Bruges a lot and it makes a great deal of difference if you make a effort to speak the language. They still see me as the daft Englishman and speak to me in mixed Dutch \ English, but it certainly breaks the ice.

Have a look here for guidance on living in Belgium, certainly around the residence status.

You need to be aware to live in certain areas of Dutch speaking Belgium you have to take Dutch courses to gain residence. These tend to be in certain areas around Brussels, I do not think Leuvan is one of these.

It's not too difficult to meet people. Once in a while the city organises a welcome reception for foreigners who moved in. There are loads of opportunities to take dance classes or yoga classes or something else, in English. To foreigners Flemish people sometimes seem hard to get close to (e.g., compared to Dutch people) but once you are a friend they are very loyal and welcoming. Showing a willingness to learn Dutch is appreciated but not a necessity even though some people won't like it if they learn that you live there for many years yet and still don't understand the local language. There's a lot of history behind this...