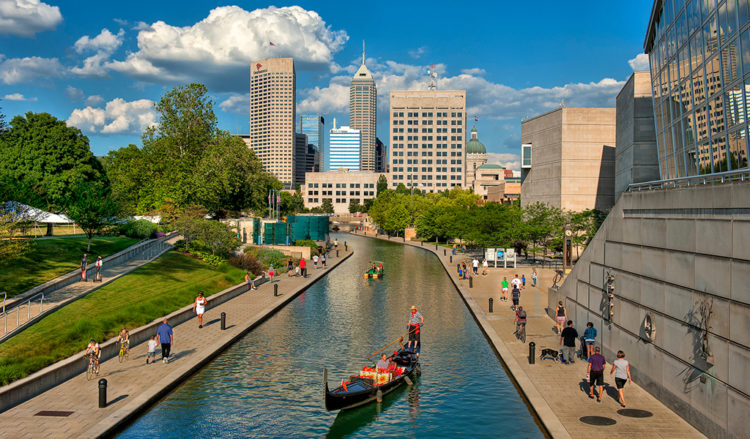 Indianapolis is a great place to live compared to Seattle/ Spokane. I moved here 2 years ago after living in Washington. Buying a house is incredibly cheap. The rush hour here really is amazing compared with Spokane. If you move to the northern side there are lots of shopping, parks, tennis clubs/ courts, golfing, lots of great places to eat and state parks.

The gay and hipster scene isn’t as big, but certain areas will give you that vibe if you want it. Areas like Broad Ripple, Mass Avenue and Fountain Square.

People here aren’t as liberal. No matter where you live you’ll find both extremes though.

There is a higher crime rate here and the roads are going downhill. The public transportation is non existent compared to Seattle (never used it in Spokane).

The only things I regret about moving here is the lack of skiing mountains, true backpacking areas and leaving my friends and family behind.

From Spokane, Indianapolis is probably a big city. And not as expensive as other big cities. If you have family here, it would be worth spending time here and seeing what's going on for a while, especially looking for a job or finding a program for school. That'll help you make a more information decision.

I currently live in Indianapolis and have for 18 years. It's very cheap to live here, plenty of up and coming neighborhoods closer to down town. The suburbs are all general nice especially the north side. Lots of growth here as well. New businesses moving in, tons of colleges, and plenty of unique local restaurants, bars, breweries. If youd like shot me a PM and I can give you more info.

I moved here, and I was surprised by how much I liked it but we are not planning to stay her permanently.

Indianapolis has really low cost of living, so you can do a lot more with less. Traffic isn’t really that bad when compared to other big cities. Having lived in Colorado I find the outdoors lacking, there’s eagle creek in the city and a few other places to hike and do outdoorsy things a drive hour or more away.

It kind of sucks that there’s really no public transportation, and if you go out and don’t live close to bars you pretty much have to rely on lyft/Uber.

I generally I’m not a big fan of Indiana politics and policies, but I found my own “bubble” downtown. There’s always some sort of festival going on downtown here, and that can be fun and not break the bank.

If you are a big fan of sports, Indy is going to be great for you. I know a lot of people love Indy fuel, the Indians and Indy eleven and tickets are super affordable.

I’m not really familiar with schools that train bakers here.

One of the reasons I really want to move back to Colorado is because of my close friends and family. Good luck with everything!

Grew up in Indy, lived in Lafayette, IN for a while, now live in San Francisco. Will probably move back someday.

Keep in mind with the novel I wrote below, I absolutely love Indianapolis. Every city of this size is experiencing somewhat of a renaissance, Indy really isn't special in that regard. My opinion (partially backed by data) is that most millennials grew up in the suburbs, and we want more of a diverse urban environment to live in, and many of us have decided to invest in and change the cities we grew up outside of. People are exponentially investing in Indianapolis. It has a long way to go, but it's turning into a great cultural experience, not just the family friendly and affordable place it's known for.

I'm one of the biggest fans of living in Indianapolis and I could likely write a book on the reasons.

I grew up in Boston and never thought much of Indianapolis.  It wasn't until I was living in Chicago and read an article in Forbes or Fortune Magazine describing Indianapolis' affordability.

Having never visited we came down to Indy to venture into the rental real estate market.  We soon found ourselves seeing so many of the features of the city that many locals miss.  Fortunately, we were able to move due to the ability to continue our jobs remotely.

The city has most everything that a major city would have....because it IS a major city.  However, unlike other cities that I had lived, the accessibility of the city makes it a place that you get out an enjoy it multiple times a week.  There had been times in Chicago where I didn't leave my neighborhood for weeks because a trip downtown was expensive and you spent more time traveling than you did at your destination.  (I'm not knocking Chicago, It is a world-class city and has an energy all its own.)

I've been in Indy for about 6 years.  I still find surprises all over the city.  You may have to get out there and look, but it honestly doesn't take much effort at all.

I also appreciate the energy the city has right now.  You can almost sense that we are having a renaissance of sorts.  I can't wait for what tomorrow brings.

NOTE: In full disclosure, I now live in Key West, Florida. I have very fond memories of Indy.  Great city!

I was born and raised in Indianapolis, then moved to Fort Ord, CA in 1986, while in the Army, then stayed there until 2001. I now live in Vegas.

I liked the city and the people, but never liked the cold weather. Most of my family still lives in the midwest and seems to enjoy it.

If you're a basketball fan, the Pacers, college rivalries and high school basketball will excite you. The Colts came before I left and gave Hoosiers a chance to focus on one team. Before that and even now, for baseball, the fans were mostly split between Chicago and Cincinnati teams.

There are plenty of decent public and private schools to choose. Never got much into the night life, but downtown came to life right before I left and has only improved, since then.

You can get to Church Hill Downs or to a MLB game in Cincy in less than two hours. Flights elsewhere are plentiful at the world class airport. There's a lot of excitement at the Motor Speedway for the 500 and Brickyard 400, even if you just BBQ while blaring it on the radio. There's lots of good fishing, parks to get lost in and quite a few getaway places like Nashville, IN 45 minutes south of Indy.

I don't get bored wherever I am. So, I'm not a good judge of the level of excitement there. Good luck.

Let me start off by saying that I am an Indianapolis native.  If you live in Indy you should take pride in our city, but that pride definitely takes some patience to develop as Indianapolis has been slow and steady in its development over the past 30 years.

Indy is for families.  It is for people who love sports and competition.  It is for people who like a slower pace and who like to find parking for less than $5.  Indy is like a comfortable pair of sweatpants that you know could be more fashionable but fit you just right.  On the other hand when the city gets dressed up it has a tendency to steal the show (Superbowl XLVI anyone?).

If you are looking to relocate to Indianapolis here are some things you need to know:

Indianapolis is a great place to visit. But what makes Indy such a splendid place to stop over makes it an even better place to live. Home to one of the world's largest children's museums, as well as professional and college sports teams and miles of recreational trails, the Circle City has plenty to keep locals entertained. Indianapolis' lively downtown is easily walkable. With so many things to do, Indianapolis allows its residents to experience big-city living without too much effort.

The metro area includes an array of neighborhoods and suburbs, and many offer their own shopping and entertainment venues. Even so, suburbanites still venture downtown for its shops, theaters and restaurants.

Indianapolis is often referred to as the Racing Capital of the World thanks to the Indianapolis Motor Speedway, which takes up 560 acres on the west side of the city proper. Every May, hundreds of thousands of people show up to watch the largest-attended sporting event in the U.S., the Indianapolis 500. Sports in general play a huge role in the region's economy. By hosting other major sporting events, like NCAA tournaments and the 2012 Super Bowl, Indianapolis has benefited in the multimillion-dollar range from increased business opportunities, job creation and more taxes going directly to the metro area.

Depending on what you're willing to pay in rent, they do have expensive properties downtown. Understand anything right outside of this in any direction is not good. North south east or west. You won't find anything besides crime until you hit about 20^ minutes either way from downtown. You will be able to find some streets that are quiet; but you'll seriously have to go looking. You'll definitely find something. Rent here is cheap if you can find something in the city. I-465 will be your best friend. It's Indianapolis' interstate that will let you off almost at every main street; just faster. Again, good luck.

Jay, you're already received some great advice but here's my 2 cents worth on Westside. I've worked all sides of Indy & agree love where you live. I'd wait a year before buying. I've lived on West side 30+ years and enjoy it very much. Plainfield is growing, Avon is out of control with growth but both nice places to live. Brownsburg farther out but easy access to interstate & nice. Very friendly folks, lots of restaurants and nice open air mall in Plainfield. 25 mins to downtown for events. Currently Plainfield has 2 brew pubs & Avon has one brewery. Kind of cities where folks introduce themselves sitting at a bar, even shaking hands last where we were. Not knowing what type of social life your looking for leaves me at a disadvantage. I think you'd enjoy as long as your not looking for hipster bars but sports bars are everywhere, homes are affordable, and both are close to your work plus downtown.

I live in Fountain Square and love it but it's still a little rough around the edges and mostly single family houses. I've also lived in Chatham Arch (Mass Ave area), Broad Ripple, and Castleton. As far as nightlife and activity for singles, the downtown area is definitely the place to be. I recommend checking out the monthly newspaper, Urban Times, if you're interested in near downtown neighborhoods. Indy nightlife hot spots are Mass Ave, Fountain Square/Fletcher Place, and Broad Ripple. Welcome to Indy!