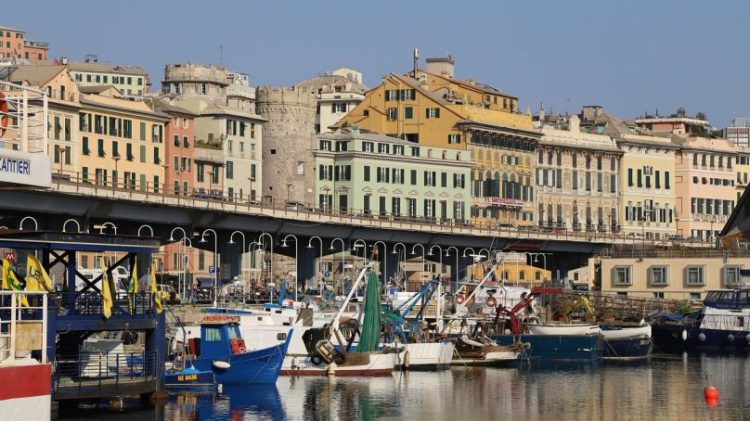 I have been thinking of relocating to Genoa from Sicily for some time to be nearer my children and the UK. I have heard one or two bad things about the climate oddly enough (some kind of weird drizzly rain) and that Genoese are unwelcoming to foreigners so it is very hard to integrate

Genoa is a strange city. It is a pearl covered in shit. My AirBNB was next to a beautiful church, almost in the centre of the centre, but once you stepped outside you mostly saw prostitutes and African migrants with fake expensive clothing, standing around at corners. If you walked ten steps you would arrive at a liquor store that sold bottles of wine for less than an euro, probably for whitewashing purposes. Hell, if you walked across the Garibaldi street, the most beautiful street in Genoa, you only needed to stop at the right corner and look into the alley and you could see a prostitute. Everywhere there was Antifa graffiti, and on many spots you could see Alpini soldiers patrol for some reason. It seemed to me like a city of contradictions.

That's not necessarily a bad mark for the city though. It was a very beautiful city, but many parts of it were pretty badly maintained. That contrast is what made it very interesting to me.

Genoa, the capital of Liguria, is the sixth largest city in Italy with a population of 608,826. Genoa is situated between the Ligurian Sea and the Apennine Mountains and the region of Liguria boasts a rocky coast, sandy beaches, mountains and green hills.

Only went to Genoa for the Boat show but remember a fantastic restaurant "I tre Merli" in the Porto Antico where the make all kinds of delicious focacce. It is near the Acquarium which is also worth a visit. Weather is also quite mild there. Didn't like the black sand. Welcome to the forum.

I moved out here 17 yrs ago when I was single. The position is great, near France, not too far from the mountains, on the coast etc. the city in itself is ok, I've seen worse. Genova and its surrounding areas have some lovely sea views. Savona is small and the beaches there are nice.

Of course it has its advantages but now on a more negative side.

As a mother now of three young children I find Genova (I'm central) dirty. People in general are rude, extremely selfish and not very friendly. There s a lack of professionalism in general and no altruism at all. Dog dirt lines the pavements and if it s not that it's the strong smell of urine, in the summer months it can be unbearable. Parking is tough and if you do find it,it will often cost €2.50 an hour.

There is little to do with kids. The port boasts a good library and the cita dei bambini which is a museum for kids. It s good but once you've been a few times it can become boring.

There are quite a few museums but some of which are not so well kept.

The summer months can be tough if you are strapped for cash. The nice pools on the sea front or in albaro (nice area not too far from centre) are expensive and again you must add pay parking unless you are a resident in that exact area.

If you need something strange (I needed a small block of polystyrene last week for an activity with kids) you will go crazy thinking where to buy it.

I have weeks where I hate it here and the people then I have weeks where I'm almost content.... As beautiful as it is to live near the sea (i live centre, not suitable really for swimming as it s too near city) I miss the green!!! Country, parks etc.

It all depends upon what you want out of a place. To be honest I feel desperately unhappy when I take my kids to nursery every morning and have to tell them to watch their step because of dog dirt, n o little than 4 or 5 times...our walk takes aprox 5 mins.

I would avoid Genova. There are some much nicer places.

It's many (many) years since I lived in Genova – and although I worked there for about six months I quickly moved to a charming village down the coast (that turned out to be completely dead in the winter).

Although the Genovese have the (stereotypical) reputation of being tightfisted – (a bit like the Scots stereotypically had in England) – I found most people to be much the same as you'd find anywhere else in Italy: i.e. generally charming but rather difficult to get very close to in view of the general reliance on tight family ties in Italian society.

As an ex-pat you would usually be regarded as a curiosity; and being a British ex-pat it will automatically be assumed that you're 'per bene' and related to the Queen or know Kate Middleton. (I guess that Emma bianchi is not subject to this phenomenon and unfortunately for her is having a really hard time of it.)

Apart from the dog mess, Genova is a nightmare if you drive. There is so little land on the flat, that the population are crammed into a very thin strip along the coast – and car parking is nigh on impossible wherever you go. It's generally ok along the coast out of season, but in July and August forget it! (A lot of people from Milan and Turin have holiday homes there.)

The Riviera di Levante is stunning, and really expensive; and the Riviera di Ponente is also rather costly. You could consider living in the 'entroterra', but would need to research the idea thoroughly before making the commitment.

With pesto, olive oil, focaccia a formaggio, wonderful fresh fish and a glass of Pigato or two, it'd be very hard to live in the Genova area without eating very well indeed. And the climate is one of the best in northern Italy: Much milder in the winter and generally 'ventilato' in the summer.

I'm not sure if it's still true, but at one point Liguria reputedly had the lowest birth rate in the developed world. It certainly has an ageing population – so maybe that's why Emma bianchi finds them a bit grumpy – and maybe all those oldies have stiff backs and can't bend down to pick up the dog poo.

Why don't you stay in the area for a few weeks at different times of year before deciding whether to move there or not?

has given already many informations; I want to add only few more suggestions: plan well ahead of time the rental of a place to stay; it should be close to where you are going to work, study or spend most of your time. Traffic in Genoa is terrible and only one line of metro is available so moving even a short distance, like 2 km, may easily take 20 min. by bus at rush time. This is why mopeds, vespas and motorbikes are almost more common then cars. A bicycle is an option ONLY for real athletes: Genoa is up and down the sides of various mountains, a 100 to 300 meters climb is quite common.

One more thing: it is true that the climate is quite nice and mild but…Genoa is really windy, so you have to have proper attire for cold and windy days because of the wind chilling factor and it is specially annoying when it rains (actually in Genoa it can really pour, at times!) and the drops are coming at you horizontally and / or your umbrella keeps becoming a funnel!

Genoa is a place of several firsts and superlatives: the first bank, Casa San Giorgio, 1407; the first soccer team, Genoa C.F.C., 1893; the most famous explorer, native son Cristoforo Colombo; and the most notable prisoner, Marco Polo, who was imprisoned in 1298 during a war between Genoa and Venice, then rival republics.

Genoa is one of the Italian cities that still have many professional opportunities to offer but, compared to many other places, is still not as expensive as the other main cities in northern Italy. No matter your reason for moving to Genoa, there are certain things that must be taken into account if you want to experience this move from your hometown to the beautiful Ligurian city calmly and with no unexpected surprises. Here is our little guide to moving to Genoa: 5 things you should know.

Many people choose Genoa as a good alternative to more expensive cities such as Milan. Well. It’s not all true, though! According to recent surveys, Genoa is indeed more expensive when it comes to the city centre and cheaper in the outskirts, just like the rest of the Italian cities; however, it still remains one of the most expensive cities in northern Italy. Before you throw yourself into this new adventure of moving to Liguria, it is, therefore, crucial that you take account of the real chances: you shouldn’t be unprepared and base your decision on false myths!

So if you are moving to Genoa, you will be happy to know that Easybox has one of its sites in an incredibly strategic area near the city centre, which can easily be reached by car in only few minutes. Easybox can help you throughout your moving project: it can be your solution to store all you need to store before moving into the new house if it needs renovating or repainting. With Easybox, you will have a place to store your furniture and objects and protect them from the house renovation. If you study in Genoa and live in student accommodation, you might really need some extra space to store your winter clothes or old books. Easybox will help you find everything you’re looking for in a few easy steps. You just need to contact our team, explain your project and find the best way to manage it with Easybox!

The cities economy is based on electrical engineering and electronics, petrochemicals, aerospace. Genoa also has a strong ship building industry. Tourism is now becoming more and more important; in 2004 the city was nominated as the European Cultural Capital of the year.

House prices in Genoa have recently faced the real estate market crisis with rising prices both in terms of rental and real estate. In these difficult times you would be well advised to hire a real estate agent to help you in finding the most appropriate accommodation within your financial means.

There are various ways to find accommodation in Genoa: the Internet, real estate agencies, local newspapers and word of mouth if you have friends in the country. However, real estate agency fees can be quite high, and this should be taken into account before engaging an agency.

Many expats choose to rent a property, particularly if they only plan to stay in Genoa for a short time. If you decide to rent accommodation in the city, you are required to pay a guarantee which is equal to two to three months’ rent, when signing the lease documents. This sum will be refunded upon the lease expiry, provided you haven’t caused any damage to the property during your stay. In general, rent is usually paid in cash.

Genoa is located in the northern area of Italy and is on the Mediterranean Cost. It also has the largest seaport in Italy. The population of Genoa is 607,906. For those moving to Genoa from England you will find that the flag for Genoa is the same as the St George Cross. Genoa has an international airport with flights to and from the UK amongst other international destinations.