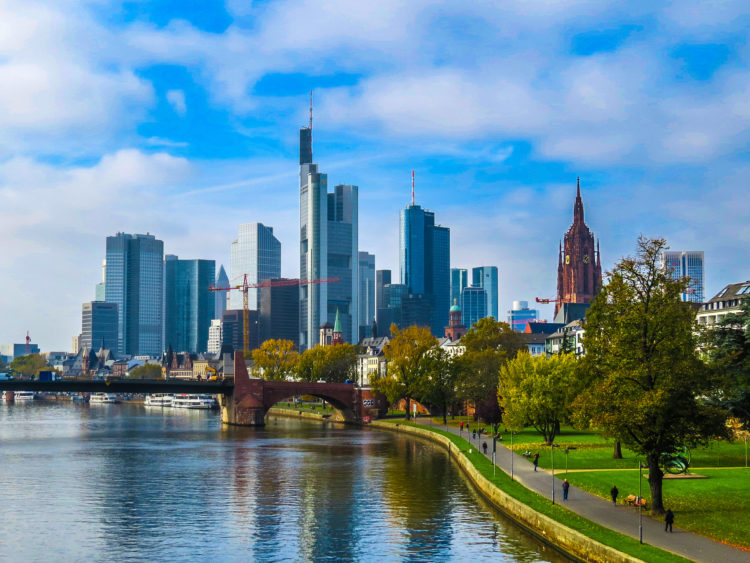 Don't. Unless you're willing to throw mad cash at a landlord. Frankfurt is expensive. It's much cheaper to live outside Frankfurt, for example Karben, or even Bergen-Enkheim.

I lived in Frankfurt for 15 months and didn’t enjoy it. I prefer almost any other major German city to Frankfurt (Cologne, Berlin, Munich, Dusseldorf, Hamburg, etc). That said there are some opportunities that only exist in Frankfurt.

I found Frankfurt to be exceptionally boring, in both personal and professional meanings. I’m techie by trade, and most founders startups and fintechs dreamed about moving to London, New York or San Francisco due to various reasons.

Personally - I enjoyed Frankfurt for first 6 months, but after found city too be a little bit too small, and not enough to offer. I gladly moved back to London after I finished my contract.

Frankfurt is dead outside the office hours and ugly anyway.

You really should try to find something in Wiesbaden or in the smaller towns arond Frankfurt. Nearly all international banks are in Frankfurt, u might try there. Most of them will have marketing areas.

Frankfurt am Main has the highest rate of crime in Germany. (While Munich has the second lowest.)

Don't know if that will make much difference in your day-to-day life, but I reckon it's something to bear in mind.

Frankfurter here. We definitely have bike trails such as downhill and normal ones around here but you'll probably need to take public transport for about an hour to get to the downhill ones.

If you're just looking for normal trails there is a bunch of them next to rivers like the Nidda, Main or in the Stadtwald (Cityforest). I don't know how much biking trails there is in Berlin, but I can't imagine it being super good since it's just pretty densely populated and getting out of Berlin will take you a while.

As far as low density goes, Frankfurt should be your choice.

But housing in general has gotten more and more expensive in the past 5-10 years so I would probably say Berlin has Frankfurt beat in that category. Another thing that is kinda annoying in Frankfurt if you're new (natives just know how to avoid it) is how money focused Frankfurt can be.

Berlin is more densely populated, huge, cheaper in things like food and stuff and honestly probably more international and easier for foreigners to get comfortable because you'll easily get to know other people that are in the same situation. On the other hand, Berlin can have some pretty extreme weather, in the summer and in the winter, from absolutely freezing to so damn hot you wish you could just have that winter back.

When you move to Frankfurt, you may also look for a flat in the suburbs. Basically you trade time (for communiting with the S-Bahn) against money (for the rent). When you go the the web site of the RMV, then select "Interaktive Karte" (interactive map). The put a checkbox in [x] Liniennetz. Now you see all the S-Bahn (trains), U-Bahn (underground, subway, depending if you're from UK or US), Strassenbahn (Trams), and bus lines. The S-Bahn is in green, it's the fastest.Blue is the U-Bahn, nearly as fast (but has way more stops, which cost time).

That should help you checking flat locations.

Handkaese blergh that was a horrible flashback, love love love Frankfurt. It’s a great city to live in although it is a bit pants for tourism!

small things to consider - Berlin is a solo habitat of a party hungry crowd of creative, honest and rough people surrounded by the cold forrest and backwards reality that is Brandenburg. People who live here often have a lot of stories to tell and not much money left.

Frankfurt is generally nicer, maybe more superficial, definitely more relaxed. The countryside is more attractive and other cities to visit are close by. It´s a cultural value to be open for decent fun. People tend to have money and not worry about that.

My point of view as a foreigner living in Frankfurt is:

Frankfurt doesn't feel particularly German. Folks here mingle with hordes of English speakers. There are scores of restaurants from different cultures. It's a clean, modern metropolis that feels a bit like a miniature version of a North American or Asian city. Even among Germans, Frankfurt is a place that people move to specifically for work. Thus far I can count on one hand the number of native Hessens I've met.

The bizarre thing about Frankfurt is that you expect it to be a big city. You expect it to be large or have a thriving arts scene. BUT it is not particularly wide or has a lot of people (though if you count the greater metropolitan area it does). And sure there are museums and culture but nowhere to the degree you'd find in the major cities of the world. So despite Frankfurt being the financial center of Germany, home to the European Central Bank, owner of the second largest airport in continental Europe and the only city in Germany with a skyline, it is not at all like Berlin or San Francisco or Hong Kong. In those places you'll find a wider range of diversion.

One day Frankfurt might be a place that rock bands mark on their tours, a place where hipsters take up residence or a town that's known for more than finance. At the moment, it remains "Bankfurt"--a city just on the cusp of being considered one of the major urban centers of the world but not big or lively enough to join the club.

I live in Frankfurt since 2002. It is not a city you will love on first sight, you will have to get to know it first.

Here's a link to a recent Bloomberg article about Frankfurt

yes, no doubt about it ! It is one of the most safest cities in Europe. But as in every city, there are some dark zones in frankfurt too which you should research on web. Overall, compared to cities which draw huge tourists, it is much safe and professional. You will see people roaming around river side late at night which indicates how safe it is !!

Hey Laurel, thanks for the comment. I would agree from a tourist’s perspective that I enjoy Munich much more than Frankfurt, but I think it’s actually quite nice to live in Frankfurt…you still get the international vibe, but aren’t surrounded by people snapping pictures wherever you go 😉

I loved living in Germany, I only visited Frankfurt twice and would love to return. Now I will have an opportunity to see how Budapest feels as an expat city.

I moved to Frankfurt in November 90 after 11 years working in London ... I sure as hell wouldn't want to go back, the quality of life here is , in my opinion , much better once you've settled in.

The only thing I miss are trips to the seaside

Hmm, I''ll go out on a limb here. Frankfurt is full of bankers and we generally work a whole lot making gazillions of Euros (OK, I haven't managed that yet) but anyway it's not really a party metropole compared to a Berlin, Munich, or Hamburg. Lots of guys with slicked back hair and fancy suits and when we get done with our long working days we go home.

The club scene is still reasonable and there are really good techno clubs for the younger set but they're a bit away from downtown. To me, Frankfurt just lacks that certain "buzz" or vibrancy you find in some bigger towns. There is no real clearly sort of defined party zone with a high concentration of clubs and restaurants like you find in some cities. On the positive side there are good jobs and the town is very easy to get around.