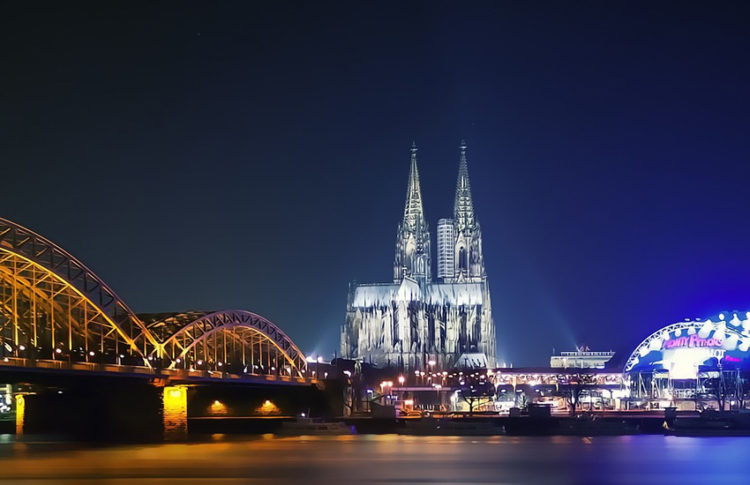 In the west of Germany lies the city of Cologne. The famous cathedral is the first thing you will notice gracefully, hovering up above the horizon, whilst the River Rhine runs right through the city. Cologne is a cultural hub in the west of Germany, and the University of Cologne is one of the oldest universities across all of Europe. The charm of this city is led by its inhabitants who are well known for being relaxed and happy, though the culture and history of the city is enough of a draw in itself. With a population of over 1 million people, Cologne has a large Muslim community, who hail mainly from a Turkish background, and also the largest Jewish population throughout all of Germany. Having always been an important city for trade in Europe, the city has benefited from globalization, combining the rich past with an exciting future.

I visited Köln on a school trip when I was 14 years old, the German Trip! I recently passed through Köln on the train and saw the cathedral, I should have really made a stop.

I’ve been thinking of taking the Camino De Santiago, what a story that he met his future girlfriend at the start of the camino. I understand how he feels about people want to speak with him in English, this is useful if you don’t want to learn German, but as he is learning German, it must be frustrating!

Depends on what you want aint it ? A modern million city with all you need and a nearly 700 year old Dom that survived the bombings , big enough but also small enough.With a University in the centre It's a good lively party place. Beers good and the people are friendly. Lots to do always in a small area. Public transport is affordable.

People in Cologne are known for their "lust for life" . There is always alot going on plenty of clubs, bars also a big gay nightlife szene. Personally I would always choose Cologne over Frankfurt but of course it then comes down to the best job offer.

Cologne's train station, in general, has the highest proportion of delays in Germany afaik. Especially during rush hour on trains to/from Bonn or Düsseldorf, which are always packed full.

They are, however, quite frequent (3 trains per hour) and in the worst case scenario, the NRW Mobilitätsgarantie allows you to use an IC or ICE if all of your options are delayed by 20 minutes or more. So you can live with it quite well, provided you have a job which doesn't require you to be at your desk at exactly 9 am every day.

I would not say the Cologne is expensive. There are neighborhoods that are very affordable. During my student years I had an apt near the Fuldaer Str subway station and it was inexpensive. 10 min ride to Neumarkt by tram. I believe the neighborhood was called Höhenberg, but I might be wrong about this. I spent almost 4 years in Cologne and moved out in 2014. I loved it and think it is great city to live in, especially for young professionals.

A, well, Cologne. Wonderful city, but you'll have to get used to it.

First of all, the cities name in German is "Köln". It has two distinct cultural features: The "Kölner Dom" (Cologne Cathedral, the pride of every Cologne citizen) and "Karneval" (hard to describe, Mardi Gras like, basically a unique way to celebrate the last days before lent, with parades, sessions, etc. Something one has to experience first-hand).

The people from Cologne are very open and tolerant, up to the point that there is a lot of LGBT activity, including a Christopher Street parade in summer. But they are also quite open to immigration, as the city itself has always been a mixing-bowl of cultures, be it Romans, French, and other nationalities.

Some of them still speak a local dialect "Kölsch", which is also quite important in "Karneval", and almost unintelligible to foreigners and even some Germans.

And, to save a British expat, they even have an "English Shop" in the city center, where you can get all the stuff a British person needs to survive abroad.

Don't hesitate to ask if you have more questions about Köln.

Over a quarter of Cologne is dedicated green space which works out to an average of 75 m2 for every inhabitant of the city. Chief attractions among the 2 million+ annual tourists include mediaeval churches like the gothic Cologne Cathedral and the Cologne Carnival, characterised by street parades and stage shows, which takes place every winter.

Moving to Cologne beginning of 2014 is a very good idea. From Thursday 27th of February to Wednesday 05th March 2014 is the Cologne carnival. That is the best time to learn to know new people and find friends. Everybody is in party mood; all pubs are full till they burst. Germans go wild in that time. With my best friend from UK I went there and Cologne carnival destroyed all her bad prejudices about bad tempered Germans. Of course I send her back before carnival was over so she never learned to know Germans when carnival is over ;-)

At the moment it is quite complicated to get cheap apartments since Germany is trying to survive a school reform. Most states have changed from 13 years high school exam to 12 years. This means that all university cities are flooded by students. Cologne has a large university so many students are looking for cheap apartments. If you need an apartment best is to check www.immobilienscout24.de

If there is anything I can do to help you do not hesitate to send me a email. I am living not far from Cologne.

This is really helpful, I have a friend living in Cologne and he finds Germany to be great. I always love to read about life in other places

I actually have a cousin that just moved to Cologne and she loves it. When I was in Germany for a week we were unable to make it to Cologne but I think we took the train through it. We have only heard great things about it including this post. We hope to get back to Germany very soon and see Cologne.

Cologne can be a great experience! It is one of the friendliest cities in Germany and people are known for partying and having a good time (just google “Karneval”). Just like with moving to any city, your experience will differ vastly on where you end up living and there are good and bad parts. In general, the left side of town is more lively and contains the downtown area, whereas the right side is a bit more calm. If you know a native, let them give you a tour of the different quarters in town to get a feel for what may suit you best. The most important phrase you need to learn is “Ein Koelsch bitte” (One beer please). Koelsch is the beer of choice.

I don't know if that's normal Cologne weather but I like it. It reminds me of my home town. Might be gray and foggy but it feels so cool and relaxing.

That's so cool, I live near Cologne! Some of my greatest memories were made there :)