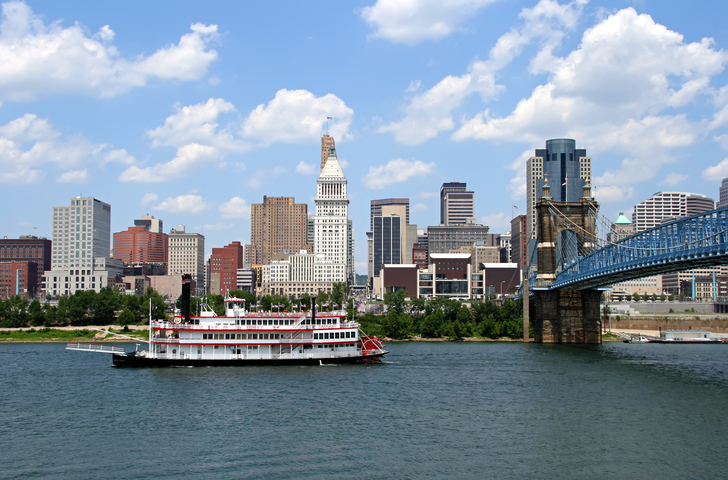 For the past few years a number of Cincinnati eating establishments have been ranking pretty high in the nation. In fact OpenTable’s Top 100 Restaurants In America For 2017 includes three Ohio restaurants all of which are located in Cincinnati! The restaurants are Orchids at Palm Court, Restaurant L and Sotto. The local casual dining options are also impressive in Cincinnati. Whether you want to try the Cincinnati take on chili (it takes a few times before you truly appreciate it) from Skyline or Goldstar, you want some top ranked in the nation barbecue from Eli’s Barbecue or you are looking for a great deli style of eat in place there is Izzy’s. Cincinnati also has a large variety of food truck options that offer great food at different locations around the tristate area.

Cincinnati is host to many live music events all throughout the year. Indoor venues like U.S. Bank Arena have been host to many popular rock, pop, country and R&B performers. Cincinnati Music Hall hosts the Cincinnati Symphony and Cincinnati Pops Orchestras as well as ballet and opera events. For those looking for an outdoor concert experience there is Riverbend Music Center towards the east of Cincinnati in Anderson Township and a number of other smaller outdoor venues in and around Cincinnati.

The Pew Research Center shows Cincinnati leaning just left of center politically, but overall, Cincinnati tends to have liberal aspirations while retaining a lot of conservative attitudes. That push-and-pull between the two ideologies can lead to awesome things, like Cincinnati being the first city in the country to ban so-called “conversion therapy”, but, the recent no-confidence vote in the Cincinnati police union president Dan Hils by the Sentinels Police Association, the advocacy group for African-American police officers, points to the city’s still-current racial tension.

There are many problems facing Cincinnati today, just as there are in cities across the country, but it also has many positives in practice and in the pipeline. We welcome newcomers with open arms and affordable cost-of-living.

Located in the state of Ohio, Cincinnati (often nicknamed ‘Cincy’) is the third largest city in the region and also comprises part of nearby Kentucky, which lies across the Ohio River. The impressive Roebling Suspension Bridge spans the river and, when built in 1867, was the longest bridge of its kind and the model for the Brooklyn Bridge in New York City.

In the late 1800s Cincinnati was sometimes referred to as the “Paris of America,” and a century-and-a-quarter later that description remains apt. A city of 300,000 people situated on the north bank of the Ohio River at the border of Ohio and Kentucky, Cincinnati is known for its great architecture and many cultural attractions, especially its museums and theaters. It’s also home to nationally-recognized colleges and universities, making it an attractive place to get an education, not to mention a prime destination for those looking to start or continue a career, with nine Fortune 500 companies headquartered in the city.

Expats moving to Cincinnati will find a compact city with a growing economy and a diverse range of job opportunities. Indeed, the outlook for the Great Cincinnati area is very positive, as it is considered one of the fastest-growing economies in the entire American Midwest region.

The city of Cincinnati, fondly referred to as ‘Cincy’ by its residents, straddles the Midwestern states of Ohio, Indiana and Kentucky along the Ohio River. Expats moving to Cincinnati will find that the city offers an excellent standard of living especially for those who want to raise a family.

Cincinnati has a contemporary style and sophistication that uniquely blends with old-world European charm. It’s a progressive, cosmopolitan city that retains its rich traditions and ethnic heritage. Known for its picturesque setting, Cincinnati is nestled in the valleys and hills along the Ohio River. A bustling metropolitan anchor for the tri-state region, Greater Cincinnati is home for more than 2.1 million people. The Greater Cincinnati’s $132 billion economy has not only surpassed Columbus as Ohio’s largest, it is the fastest-growing major city in the Midwest. The region’s diversification kept its economy steady. Growth in manufacturing, financial and professional services led the way.

I moved from out of state to Cincinnati for medical school and am currently an M3. I've lived in East Walnut Hills for the past 3 years with my wife and have LOVED it.

Fairfield has a large Latinx population, and as others have said Cincinnati proper (especially Northside) is exceptionally queer friendly. The commute would be rough, though, and sadly the Fairfield / Liberty Township areas are fairly conservative and without culture (target /panera bread/Starbucks strip malls, endlessly repeating). Fairfield at least has good Mexican restaurants and stores, but I grew up in Liberty and it was as miserable as you might imagine a place named Liberty would be.

I moved here on a wild whim... After posting on Reddit "should I move to Cincinnati or Columbus". Not really, but I did move here from the south on a complete whim.

Rent, you nailed it. All over the place depending on your needs/wants. My first place was sub 395, 1br, safe/clean in Norwood... Found it driving around calling numbers realizing if I don't find an apartment I'm in an extensive hotel room that night. It had a garage. Second place, safe/cleanish, 475 1br Silverton. Other places I looked, 1500, 1700 a month - Newer construction fancy yuppy areas.

2. What does the music and audio industry look like here? Are there many opportunities?

3. What is your personal favorite thing about the city? We've been to Columbus and loved it, but have heard that Cincinnati would be a good fit for us. We're considering it based on faith alone. I'd be happy to hear more of what the locals love.

I personally fell in love with the city. The history. The people. The quirks. The food. Columbus is a soulless hellhole. Over think things and you're going to have a bad time. Listen to people on Reddit and you're going to have one hell of a skewed view on the city. Unless you are hippydippy "I go to places that were uncool 10 years ago because I'm edgy"... Then take their suggestions seriously.

The chili is a religion. The way east and west side banter is hillarious. How everyone makes fun of every neighborhood they are jealous of is pretty funny. Well, personally i love the city, the fact remains that a lot of cities have lost their soul. Cincinnati's kind of that way just like every other City. I personally found a home here and I love it. However, you can find vibrant entertainment districts in every city. You can find Suburban hell holes with Red Lobsters in every city. Geographically it's nice to have the mountains of Tennessee and Lake Erie and Chicago within an easy drive.

Cost of living can't be beat in my opinion, especially in affordable housing. Cincinnati has a bit of a unique vibe -- to me it's more culturally interesting than other similar midwestern cities. Lots of German heritage. OTR (Over-the-Rhine) supposedly has the highest concentration of Italianate architecture in the US. Tons of festivals to enjoy all year long -- known for Oktoberfest, but we also love Bockfest and Midpoint music festival. Several museums, theaters, and a world-class zoo. The city and county both have lovely parks. I don't follow sports, but the Bengals and Reds have loyal fans (despite performance), the Cyclones (hockey) are super fun to watch, and there's an explosive following for FC Cincinnati (soccer).

Some hangout areas to look into would be OTR, downtown, Northside, Uptown (UC area), and Mt. Adams. East Walnut Hills is up-and-coming a bit too. Further out from the city are Hyde Park, Oakley, and Mt. Lookout. Some of the big suburban shopping areas include Kenwood, Eastgate, Anderson, Deerfield/Mason, Tri-county, and West Chester.

I moved around a lot growing up (including TX) and I can tell you Cincinnatians are a very hospitable bunch. You'll usually get friendly service and meet kindly strangers around town. Best of luck with your move!

I literally just moved from Cincinnati to Chicago. If you want to message me, feel free, but I would never, ever compare the two. Now that I am in Chicago I can't imagine anywhere else.

I still love Cincinnati but it's like going home for the holidays. You are happy to be back home but you know it's not a great fit for you as a person. Not saying it's inherently bad.

Edit: stuff can be walkable depending on what part of town, but you will need cars because the public transport sucks. Downtown is mainly gentrified and rent is expensive.

Cincinnati has a vibrant community with plenty of places to go, meet and be social. Whether you want to join a local club, attend classes to enhance your knowledge, attend the theater, or more you are bound to find someone with mutual interests. The different neighborhoods in Cincinnati have a lot of different options to offer. Whether you want the Downtown Cincinnati feel, the Over The Rhine hip place to be, or prefer a more relaxed living in neighborhoods like Anderson, Delhi, Alexandria, Florence or more Greater Cincinnati has what you are looking for.

There's quite a bit to do here in Cincinnati. Great restaurants, a slew of different breweries and gastro pubs, parks galore. There are a number of trails for cycling, the little Miami is great for kayaking or ruining during the summer months. Phenomenal environment for raising a family. There's a lit going on in this city, especially with the revitalization of the downtown/Over the Rhine area.

Cincinnati is great. I've had several friends move away that regret it, some already on their way back. Cost of living is nice, and plenty of areas to choose from. For you guys, I would recommend slightly east of downtown. Places like Oakley, Hyde Park, etc. That's real close to downtown without it being in your face, plenty of public transportation, very populated with the 20-35 young professional crowd.

Now that the advice is out of the way, I've always been curious how people are able to just up and move without having a job lined up.