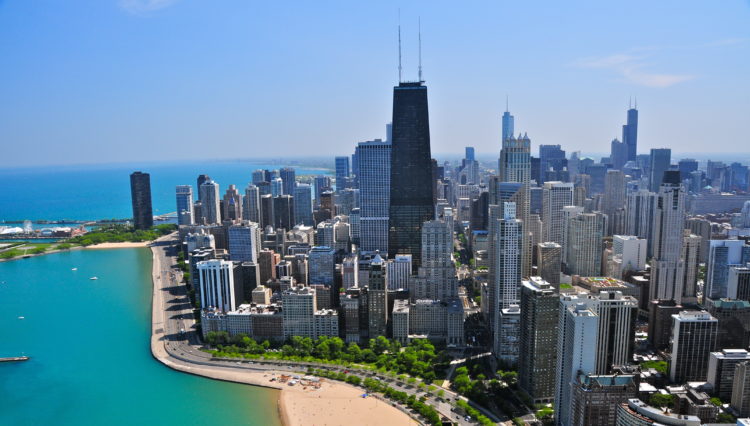 Hey, I am actually a Leasing Consultant with a Real Estate Company here in Chicago. I would be happy to give you some insight on living in Chicago. With your budget for a 1 bedroom, you have the ability to live pretty much anywhere in Chicago. The River North area is definitely a highly desired area at the moment. Like you said, a lot of the new buildings offer a lot of extras aside from just your apartment, but what you have to think about is how often you'll use the pool, rooftop deck, gym etc. What I would tell you to consider in your search is what is the most important to you in your new place. Do you want to be in a high rise district with all the extra amenities? Is a neighborhood feel with more parks and family friendly feel more of something you would like? How close to work do you want to be? Are you comfortable talking public transportation? Finding out what is the most important to you is key to the apartment hunt.

It's not bad, if you are prepared prior to moving. If your planning to move here I'd do research on jobs, neighborhoods, violence, and activities in the area.

As for jobs you want to see whats available, and the pay of it. Chicago is expensive in certain areas; especially on the north side if you want to live in a peaceful environment.

Neighborhoods are a plus, because there are some that are diverse, and some that are dominantly one ethnic culture. If you move to a neighborhood dominant of another ethnicity, then you'll be living in their culture style.

Violence is a huge thing, and you want to know what neighborhoods are the worse, and also what kind of violence happens in that neighborhood. You dont want to move to a neighborhood thats high in burglaries or shootings.

Last but not least activities. Chicago has a lot of neighborhood block parties from what i see. It gives you a chance to get a good feel of your neighborhood, and the people in it. Block parties are fun, because the businesses are out also selling there products and food too.

Before you do move to Chicago, know the neighborhoods. There are many that you would not want to live in. The schools are poor and crime is high.

Other neighborhoods like Streeterville and Lincoln Park are fun for young, single people. They are also very expensive. Then there’s the Gold Coast full of very wealthy people.

There’s something for everyone. You just have to know where.

You can also check out

for more information on life in Chicago. I can say that you should visit before you move, Its not for everyone to take a huge jump like that, if it is for you then Welcome.

100% the food. anything else is at least a distant second. but holy shit there is just too much good food and not enough time to eat it all, no matter how hard i try.

Never been to sf...but if it's anything like L.A in terms of expense, the city is comparable downtown and north side. Pricing is better in the suburbs, like 30 minutes out south. Going further north or west prices fluctuate but mostly remain higher. South and west sides of city are cheap but your in the hood. Not as bad as TV and others would have you believe as I grew up in it. Shit happens sure, but it isn't some war zone. Depending on how comfortable you are with minorities, this is where most live (black myself from south side). 8500 starting balance isn't bad, and you should land a job easily in a month or 2. Hell, you could drive for uber the downtown area and north side and bring in 400 in a weekend (fri-sun, 6-8hrs a day) which I did over the summer (definitely varies in winter). You need a car if you live outside the city, but public transportation is widely available throughout the city. Currently, I reside in south burbs and pay for a 2bd, 1 bath, 3 floor townhome (basement included) for 1025 a month. Pm if u want info more info

The Magnificent Mile, Millennium Park and the Willis Tower may blow many visitors away, but for those who live in the Windy City, the landmarks often become second thought.

Your experience living in Chicago will depend on your ZIP code. From Uptown to Hyde Park, East Garfield to the Loop, each of the metro area's 77 official community areas brings its own unique personality. The summer's festivals, fireworks and beach afternoons shift to ice skating, zoo lights and holiday cheer in the winter months – with a diverse mix of a warming spring and a colorful fall in between. The expansive Museum Campus is second to none, the beloved Cubbies never fail to entertain and the various festivals are seemingly never-ending.

Chicago residents exude Midwestern friendliness, offering "hellos" and "good mornings" to passers-by – as long as the weather's warm. Most people stay polite through the holiday season, but after that, all bets are off. As the weather begins to border on unbearably cold, Chicago residents lose their patience, acting as if they're in a hurry to be somewhere – whether or not that's actually the case.

It depends on a few factors, including where you live and what you like to do, what you’re willing to put up with, and so on.

I’ve lived in the city of Chicago my entire life and don’t see myself leaving the Chicagoland area. Everyone I grew up with lives in Chicago. All my family is in Chicago. Everything that really matters to me has been in Chicago. So for me, it’s been an awesome experience.

Now I wouldn’t go so far as to say it’s a perfect city. It’s great for someone like me but I feel that politics can bog you down on top of already steep taxes. The city is typically trying to find a new way to find money which is ridiculous. And at the same time, I believe there is an influx of young professionals that drive up the cost of living.

People say you can’t own a car in Chicago and I disagree with the sentiment. It depends where you live. On the East side, free parking is a complete mess. However, the public transit system is pretty good for a large city, allowing you to travel from A to B with more ease.

As far as jobs go, I’ve always found work in the city, thankfully, and they’re usually centralized in the downtown area.

Crimes vary depending on the part of the city. I’ve been a victim in many cases but I’ve never said “Crime in the city is outrageous!”. Listen, I don’t party a lot, I don’t go out to bars and stuff, and I feel this minimizes the likelihood of me being robbed or held up as an adult. But in a way, I suppose I’m not as exposed to such crime. People say Chicago is like the “Wild West” - please, I grew up in an impoverished neighborhood and as an adult, coming across the crime that I currently do, it’s a step up.

Over all, I love the city. It’s not for everyone. Everyone has a specific standard for their commute, politics, employment, crime, etc.

It honestly depends where you live and where you go. If you live in the northwest or SUPER far south, it’s very suburban like. Downtown is very fast-paced, where there’s lots to do, but very expensive. You have the ghetto, depending where in the south and west side. You can get some really shady neighborhoods, and then others perfectly fine. Climate wise, everyone complains about the cold, but I like the constant change of seasons. It creates change that is really pretty and also generates some cool activities. City life definitely keeps you on your toes, but it doesn’t put you on edge. Overall, I love it, and it does have problems, but it’s not an impossible climate to live it.

Overall Chicago is a beautiful city filled with landmarks, hospitals and phenomenal skyscrapers! The variety of things to do is endless. Chicago’s forecast usually consist of high winds and breezy summer nights.

Thinking of raising your family in a big city what better place than Chicago!

Several hospitals to choose from less than 10 miles apart! Medical facilities you wouldn’t believe and some of the best doctors in the world. Health care is always a priority and necessity in today’s society.

Transportation for residents and visitors is always a plus, nobody ever wants to wait. Life is on demand now days!

Within city limits there’s all kinds of alternate transportation being offered; I.e. bus service, train, and even share riding! You can’t beat it!

The only thing I object to with the city of Chicago is the cost of living! At times housing and everyday living is way to expensive and unnecessary! Lately the city has been coming up with ridiculous tax hikes!

I absolutely love living here! I couldn't imagine living anywhere else. The city is easy to maneuver, has incredibly comprehensive public transportation, and diverse neighborhoods for whatever kind of person you may be. For a major metropolitan area, rent is relatively low as well. Yes, the weather can get quite cold, but it's well worth it to be in a place where something is always happening!

Summers in Chicago are also a blast! People are so excited for the nice weather that there are a ton of street festivals and outdoor events. The beaches are also quite nice and there are several, whether you're headed to the energetic Oak St. Beach or the more relaxed Montrose Beach.

Chicago has a vibrance unlike any other city. Each neighborhood has a distinct feel, and it's really a true melting pot of culture. It's also unfortunately a hotbed for political and financial corruption, and the citizens definitely suffer for the sins of leadership. High and frequent taxes, no rent control, and other costs associated with urban living make Chicago expensive, especially compared against the rest of the Midwest. And the winter is painful and around eight months long. If you can handle the cold and the cost, however, it's an amazing city to grow in and be a part of. No regrets moving here!

Chicago is one the most amazing cities in the U.S. It has beautiful skyline day and night. It's not the safest depending on where you live.

And lots of safe neighborhoods - you don’t have to live in the middle of gang wars.