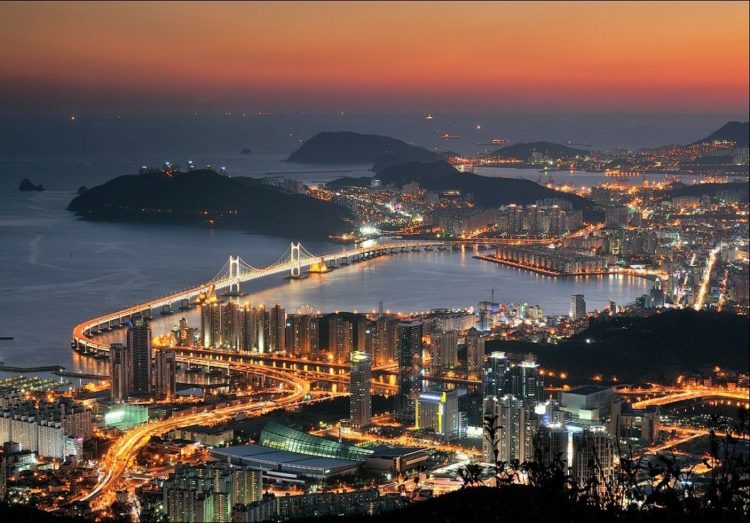 Busan, which is deemed to be one of the best Asian cities for quality living, is a major South Korean metropolis. It is famous not only for its magnificent landscapes but also for being an international business and trade center.

Busan is thus an ideal destination for expatriates looking for new opportunities. As a major education and cultural hub, it also attracts international students in large numbers.

I lived in Busan for 8 years. I would suggest Yongho-dong near Gwangali, perhaps in the LG Metro complex. There is a relatively large population of children of foreign or mixed korean decent who go to the nearby Yong-moon elementary or Gwangan Elementary. It can be very difficult for kids in a country that is about 98% korean to adjust. Being around children from similar backgrounds will soften the adjustment. Also, Haeundae or nearby Dalmaji are nice and also have a more multicultural makeup. Some of the other areas which have been suggested are very central but also very crowded and urban. The areas I suggested all offer more parks and green areas, plus walking distance to beaches.

I've lived in North Busan (Geumjeong) and now in Haeundae. I'd recommend either area. Geumjeong is a bit more affordable, but Haeundae or Jangsan offer more international amenities.

If I was in your position, I would go for the most convenient area as it relates your commute to work and other routine places. Traffic in Busan is horrendous.

I love being able to call Busan home now, but this wasn’t always the case. Making the transition to life away from everything familiar and comfortable was a struggle, to say the least. But that transition was made easier with the remarkable friends I’ve met since I arrived.

Hey! Busan is such a great city, I think you’ll really enjoy it. It’s actually pretty simple to get a job teaching English there. As long as you have a bachelor’s degree, you should have no problem. Public schools only hire at certain times of the year, so you’ll probably have better luck getting a job at a private academy, or a “hagwon.” If you look around, you’ll also find opportunities to tutor people. I have several friends who have private lessons throughout the week. If you have any more questions, feel free to email me. Best of luck!

Hello! My family and I moved to Busan 2 months ago. I am originally from the Philippines. Busan is a great place to live in especially when you have a stable job. We are living in an apartment, but we are not paying any rent because it was already paid in full by my husband's parents. I'm not used to riding the subway before, bu now I'm getting the hang of it. Most Koreans are helpful to foreigners especially when you want to ask some directions of a certain place you want to go to. But please take note that some Koreans can't speak English so don't feel bad when they try to ignore you if you ask them for help. So it's very important to learn their language in order to effectively communicate with the natives. My overall impression about Busan is that it's more developed and more convenient compared to the city where I was born and raised. I'm enjoying my stay in Busan so far.

I moved to Busan, South Korea in November 2007 to find a job teaching English. I lived there for about 2 and half years. I lived in Seomyeon for almost 2 years, Sinpyeong and briefly in Hwamyeong. I liked that it was surrounded by mountains and that the ocean was nearby. It made living among 3.5 or so million people easier. It was quite a bit bigger than the cities Taichung and Tainan where I lived in Taiwan.

It's very convenient to get around the city by bus and with the subway system. Public transportation is very efficient and relatively inexpensive. Getting to other cities like Seoul is easy too via the KTX (fast train).

The city is laid out between the hills and mountains and there isn't really one single major center - rather there are several. Seomyeon is pretty much the center, yet Nampodong, Haeundae, Pusan National University, and the Kyungsang University area are all busy areas for shopping, eating and nightlife.

The weather is pretty good in Busan. The summers can be pretty hot (up to 30 degrees) and humid. The winters can be pretty cold (less than 1 degree). Many Koreans will complain about the heat, but after living in Taiwan I didn't find the heat or humidity to be too much. I saw snow flakes fly once, but it never stuck on the ground.

I've been living in Busan for the past two years, and it is a fantastic place to live. You will enjoy yourself, especially if you are young and looking for night life. KSU, PNU, Haeundae, Gwangali, Seomyeon, all these places have beautiful scenery and amazing bars/clubs.

It doesn't get that cold around here, and there is no snow. If there is any snow, the entire city shuts down, much like in Texas. The climate is costal, but Busan is on the same latitude as Memphis, so expect that type of weather. In it's cold points, the temperature is barely under 30 degrees here. Being from Texas that might be a lot, but in Illinois (where I'm from), that is child's play.

Message me if you are looking for more information. Also, research soju. Korea has a drinking culture. Hope your liver is prepared.

Haeundae is one of the places where everyone in Busan goes to have fun. Lots of nightlife, including expat bars and a casino. Plenty of daytime attractions as well, including a world class aquarium and the most popular beach in SE Korea (during summer). Bring gloves and a warm coat for winter-it gets cold. Bring light clothing if you'll be there through summer-it gets hot and humid. Give your liver a pep talk and be ready for hanging out with a bunch of wild expats. The expat community in Busan is great-they've organized open mike nights, stand up comedy nights, live music and trivia nights at various bars around town.

Remember to study the Seoul dialect if you don't want to sound like a Korean redneck.

Busan gets crazy hot in the summer so bring some light clothes.

Bring your own hygiene products, ours tend to lower quality. This is especially true for tampons and sanitary towels (there's a bigger scandle there).

Since you can't be Korean, Be white. Busan isn't as metropolitan as Seoul so racism is more common there. Don't be surprised by the racist older folk. The younger are more accepting.

Avoid other foreigners. Getting trapped in a foreigner bubble is the worst thing. I see many of my foreign co-workers doing this. They struggle when they realise that most of their foreign friends have left Korea, their Korean hasn't improved enough to have any meaningful conversation with Koreans, and they have no one to talk to now.

I love busan! Really have to go there again, havent been in 4 years~