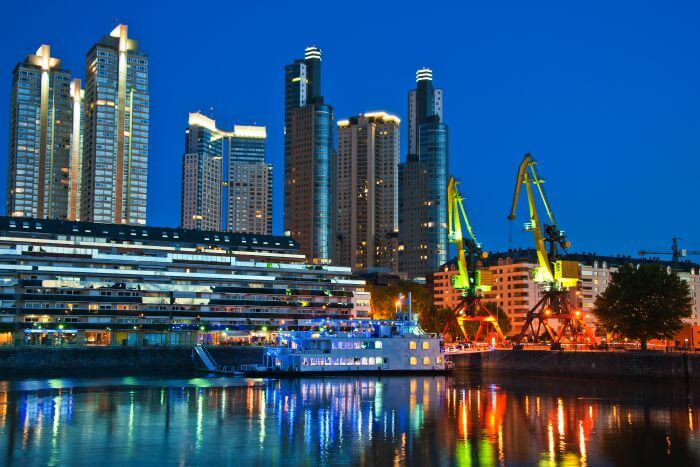 As with any large city, there are pros and cons to living in Buenos Aires. It’s a vibrant city that offers many entertainment options and so much to see and do. On the downside, it’s crowded and noisy, but with a highly educated population, there are many international companies with offices in the city and work is not too hard to come by, provided that one can find sponsorship for a work visa.

Below are some of the positives and negatives that expats may experience when moving to Buenos Aires.

Buenos Aires is a huge city and offers a million and one things to do. Expats can spend months in Buenos Aires and still not take advantage of everything it has to offer. If looking for something more traditional, like tango dance classes, this is the place to be. There are also many great new museums, tours, sights and cultural centres to visit to take part in active, social or academic activities.

You can check Expatistan to compare the cost of living in Argentina in US dollars directly to your home city. If you’re willing to limit eating out and share an apartment, it’s very possible to live on under $1000 US a month. If you plan on living alone, apartments will likely start at $700 US and go up from there. Health Insurance will cost around $100-150 US per month.

When looking for somewhere to live, don’t restrict yourself to within the capital. Buenos Aires isn’t just the 48 neighborhoods within the city boarders.

Expats have come to Buenos Aires from all corners of the world, so it has a very diverse and modern population.

Research all the areas of Buenos Aires carefully before choosing which one to find accommodation in. Each area offers a different side of Argentinian life.

Located near the Río de la Plata, where the Paraná and Uruguay Rivers meet, and surrounded by fertile plains, Buenos Aires was founded in the early 16th century. The city was under Spanish rule until 1816, when Argentina was declared independent without once more falling into royalist hands.

Thousands of people started moving to Buenos Aires when the city, as the center of the young Argentine nation, opened up to large-scale immigration in the 1850s. Newly arrived in Buenos Aires, these immigrants, especially from Spain and Italy, transformed the new capital into a wealthy and sophisticated metropolis.

Now Buenos Aires is one of the most expensive capital cities in the world. Regarding the robberies, I can note you never walked in Montevideo or Guayaquili by night. And the inflation is now around 38% annual. (by now.

But, in Buenos Aires there is something you wouldn’t find in another Latam capital city. Argentines, whatever it means.

Congrats on attending UBA. I'm from the US, but married an Argentinian. We spend 3 mos/yr in Buenos Aires (we live by the old zoo in Palermo). I have no advice other than to keep your money in dollars, so you don't lose so much value to inflation. Don't leave your cell phone sitting on the table at side walk cafes or stand on a curb & stare at your cell phone. Don't wear a nice watch.

Also, let me give you a jump start on the food. La Carniceria & Calden del Soho for steaks. I've eaten at every single steakhouse rated in the top 30 on Trip Adviser. There are a ton of great places, but those two wow me every time & are cheaper than the most expensive options. Tufic Helado & Antiche Tentaoni for ice cream. Pizzeria Guerrin for pizza. San Paulo Pizzeria is excellent too. Those two area amongst the rare spots that still make legit, old school pizza the way the Italian immigrants did. Na Serapia & Guimpi V for empanadas. Boulan for French pastries.

I'm not sure what you are exactly asking for, but what i could tell you is that Argentina is pretty chill when it comes to immigrants. I have many friends in my classes (I study in UCA -Universidad Catolica Argentina) and none of them had many problems with the burocracy. It is long, but overall easy to do. The university itself is pretty messy tbh. It's a good one, but they do ask for a lot of stuff.

You can message me if you have any questions or need any precise help, and maybe i could hit you up with one of my friends in case you need anything in specific.

Buenos Aires is a very unique city in South America because it is nothing like the rest of South America. The way I see it: it looks like France, acts like Italy, but it's in South America. It's a very vibrant and lively area, even in the winter. It has a rich and fascinating history, you'll see a lot of statues of men on horses and if you take the time to learn about who those men were you'll find each one was crazier than the last.

If you're Spanish is good you will definitely by at an advantage, but it's still REALLY hard to understand people here. A different accent than what we're accustomed to in the states and they use slang we couldn't imagine learning in a classroom.

The soccer is great here. Some of the best soccer players come from Argentina (erhrm Lionel Messi). And these people bleed for their teams. I've had the pleasure to see the boca juniors play and its unlike anything in the states.

As for the job, I would advise having something planned before you come down here. The economy is in a rough spot right now an there's quite a bit of poverty floating around. It also seems that there some degree inflation seeing as university is free to Argentine citizens. Also seeing as the average argentine income is 1/3 of the US. That being said, for somebody being paid an average US salary you can honestly live like a king, but if you're living on an argentine salary it won't be as glamorous.

It really depends on your situation.

If you're interested in Argentina I would also recommend looking at other cities in the country such as Rosario, cordoba, salta, juyjuy, Mendoza etc.

Good luck with your crisis :)

Also. If you live outside capital it's very easy to commute via train or bus. And it only costs like 2 pesos (~$.25)

I am from Buenos Aires, lived there for 11 years then moved to Canada. I am 20 years old and basically: yes the food is delicious, great city when it comes to nightlife and socializing. Like OP mentioned there's a crazy inflation going on, very hard to get your hands on US dollars and I think currently the rate is 8.50 pesos for a dollar so if you make an average US salary then yes you'll be living like a king. Have a job planned before you move there and be careful around poorer neighbours/ be careful in general. Its very easy to get robbed (has happened multiple times to my family members that still live there) and don't make it too obvious that you come from the states (tell only people you trust) so make sure your spanish is good!!! Good luck!

Oh about the university point, yes some universities are free, others you pay for, its up to the person and what field they want to go into.

I can only say that there are MANY foreign students/workers in Buenos Aires and the ones I know are relatively comfortable living here. The best thing you can do is make sure you have some sort of plan or something already cooked up regarding a job. If you know you'll get a job, I'd definitely recommend at least spending a few months in Argentina.

I'm from Buenos Aires living in the US. It is a great city lots of gorgeous chics, good food, you never stop spending money, good chances you are going to make friends easily. What line of business are you in. I have lots of friends there. Depending on the neighborhood you are planning to live the experience you are going to have there. Is like New York, if you live in the Bronx you will have one kind of experience, if you live in Brooklyn another. Palermo is good, Palermo Holywood is not expensive and good. Belgrano is classy, Barrio Norte is massive and middle class. Don't wait to be seated, the best combo in a restaurant, appetizer, chorizo, provoleta and ensalada mixta. Translation, sausage, thick slice of provolone cheesee grilled, and LTO salad, after that sasado de tira (short ribs) with papas ala provenzal (french fries, with garlic and parsley), dessert, flan mixto, (flan with dulce de leche and whipped cream)

Hope you enjoy, always be careful! Everybody is friendly and everybody speaks some english

Much like Argentina’s bustling wine industry, Buenos Aires brilliantly blends the old and new into a flavorful, cultural metropolis.

Known as “the Paris of the South,” this sensuous city entices expats and travelers alike with its European architecture, modern gastronomy, and international culture.

This sumptuous city includes a diverse people in both expats and porteños (residents of Buenos Aires). Around 85% of Argentina’s population is of European descent, mostly from Spain and Italy. Newcomers living in Buenos Aires have little difficulty finding others to relate to in the global mileage that the city occupies.

Don’t allow language or other fears step in the way of you moving abroad.

This highly cultivated nation enables business and daily life to be conducted easily, even if one’s time doesn’t allow for expert Spanish.

Uruguay and Chile are boring compared to Buenos Aires.

I'm very happy that people find interesting living in Buenos Aires. If you wanna see some nearby city, go to San Isidro. You need to get the Mitre line of train :) Enjoy your life here in Buenos Aires Bye

I'm so jealous! Buenos Aires is litterally my favourite place on earth!