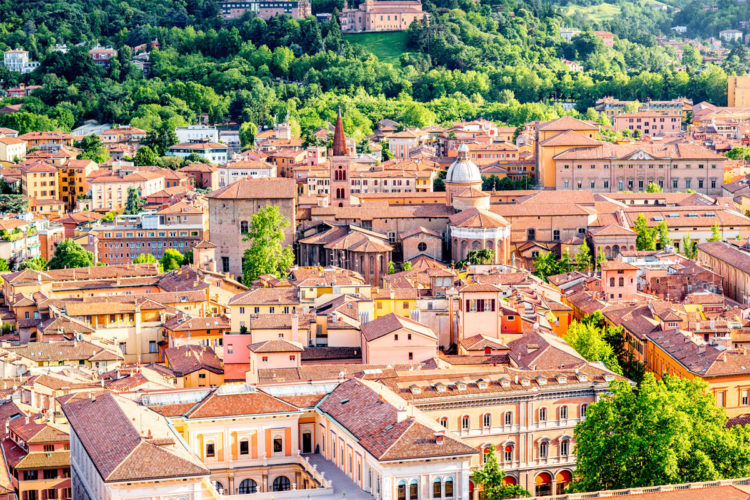 Bologna has an anarchic flair, but also a great catholic tradition. It's the world capital of cattocomunism, which means a lot of money for cooperatives, NGOs and non-profit organizations. Now, i won't say that in such environment you're incouraged to stay poor because there are so many who can take care of you... let's say that there's a strong sense of community and not having a home does not always mean you're out of society.

the shittiest thing about bologna is the humid climate, summers can feel unbearably hot, to the point of not being able to walk outside, while winters are rainy and below zero.

the city was built to deal with that, streets are surrounded by porticos that will protect you from sun and rain and the facades are painted in warm reddish colors as a fuck off to bologna's grey winter skies. Some days the climate gets really frustrating, and others you just want to stop and contemplate the different moods of the city: the hurried and dark afternoons in December, the calm spring mornings with a chill sun shining through porticos while the city pace is set by the elder women walking to the deli, the summer evenings; but those are little moments of awe you won't remember on those weeks when you have shit to do and going outside is just painful.

Let me temper these positive responses by saying that if you’re considering living there…as a local and not going there as a short-term tourist, then depending on your race/color, you’ll have very different experiences. If you’re white and you attempt to speak the language, you’ll have the positive experience inferred by the other comments. However, if you’re black or brown…people my not be as friendly as there is a good amount of racism in Italy (in general). Of course, there are lots of very nice people that don’t necessarily see the color of your skin, but…a significant population are mildly to very racist. The more south you go, the more true that usually is. Bologna and north are less so and overall, life, architecture, etc., is more modern and tolerant. I’m brown and I have been to Italy many times and lived there for a year and this was my experience (and it wasn’t just me - other friends/colleagues that are brown & black experiences a good amount of racism). For me, Italy (Bologna and other places) are great places to visit, but “I” wouldn’t want to live there (again).

There are a lot of flats for rent in Bologna but there are also many people looking for them because of the university, this is what I meant by both high offer and request.

Renting a flat by your own could be very expensive, unless you find a "monolocale" (in any case not less than € 500/month I think), while bigger flats are usually shared, and this could be for your daughter also a way to know people and to learn some Italian

You can look in the web for "agenzia immobiliare" and "affitti" (renting), or subito.it or kijiji.it

Hope this can help

Bologna would be an excellent location for many day trips as it has good train connections.

As for an apartment, you need to state some type of budget.

Bologna is the right city. Torino is a also beatiful, but i don´t know...it´s a kind of aristocratic..florence is full of americans, japanese and germans and florentinians are a bit closed to foreigners (not xenophobic, but it´s difficoult to be integrated)..rome is a mess, forget it, really...

bologna has a big university....just because of this, there are always events in cultural fields (seminars, concerts, theatre pieces..) it´s cheap, people are usually nice..and the health care..in the region of emilia romagna there is the best health care in italy ( you don´t have to pay nothig but a ticket fot non emergency procedures and tickets it´s about 20-40 euros)...the social services for a child are really good in the city (although two years ago there was a problem about public and private schools and their financing...you eat really good, you can reach every point in italy really fast because of the rail system...best choice

From Bologna, can confirm. The greatest things about bologna imo is that it is big enough to have the qualities of a big city (medium big airport, fastest trains in Europe, big hospitals, well connected highways, probably the best and biggest university in the country) but not its flaws (traffic, noise, pollution, crime, etc..). It is also half an hour away from some of the best beach life in the country and 2 hours and a half from the Dolomites. The city of itself is extremely beautiful and even though I lived there most of my life I always find something I have never seen. There is also the Biografilm festival once a year, one of the biggest in the country.

I was born in Bologna, then moved and then when returned lived in Bologna for almost five years until April 2018.

The quality of life is very high.

The city is not so big, so you can handle it easily and is relatively easy to find new friendships, dating and so on, expecially for students, but not only.

It's connected very well both to Milan, Florence and the seaside, so you have a large set of possibilities if during the weekend you want to move all over the year.

The food is ridicolously tasty: I guess Bologna (and Emilia Romagna in general) has hands down the best pasta and hams in Italy and ice cream as well.

The city is not crazy as it was at his best but still offers a good variety of places where to go, expecially if you like arts and museums, discoes and small bars where talk and drink shots. But not only.

People have a relaxed and enviable lifestyle, you see the streets full of shops, boutiques, musicians, young people and so on.

Job is ok, but mostly for mechanical engineering…

On other market sector the offering is by far worse than other cities like Milan or Turin for example.

Overall, I would say it's very difficult to dislike it… Personally, I love it!

Amazing. I miss it everyday.

You truly live Italian culture as soon as you step in that city. You are surrounded by history and art. The town is great fun, full of musical performances everywhere, art shows, installments, tours. At night the town lights up and students roam around bars laughing and dancing. There is so much to do. The food is, arguably, the best in Italy. Pasta, meat, lasagna, wine, cheeses - anything you can think of.

I love that town with all my heart and all Bolognese people will tell you the same. If they leave - like I did for education - they are just looking to shake up their lives, but they amost certainly come back as soon as they can.

It hosts the oldest university in the world, so it grew and changed thanks to its students. It is characterised by lovely porticoes and churches, huge museums and cafés. Plenty of independent bookshops characterise its tiny narrow streets, where poets and musicians play their works during the day.

It is known as “Bologna la rossa” (Bologna the red) because of its intrinsic left-wing soul, that makes it extremely progressive towards everyone. It’s been one of the golden medal cities that fought and rebelled against the Nazi occupation of Italy and it is, still today, one of the most open-minded cities in Italy in terms of homophobia and xenophobia.

Bologna is such an amazing city. It provides all the necessities like shopping, restaurants, nightlife, parks, and more without being crowded by tourists. After living there for a few months, I always told people that I would not recommend Bologna for a short-term trip, but if you want to experience real Italian culture and take it easy, Bologna is the place to go.

What I enjoyed most about Bologna were the simple daily activities like going to the library, the cafes, Giardini Margherita (an amazing, huge park on the edge of the center), and just walking around the center exploring. Bologna has so much to offer and I felt like I could never see everything I wanted to see during my time there.

As for job opportunities, schools, etc… I do not know. I didn’t have to deal with these sectors of Bologna while I lived there. Emilia Romagna is one of the richest regions of Italy though and Bologna is very safe, I got the sense that the quality of living in Bologna is one of the best in Italy.

I think anywhere in centre would be fine for her; she can take a bus during the day to do to Corticella but then she will have everything around and at night there's always plenty of people around.

I don't know your budget, but offer and request are both high being Bolognaa city full of students, maybe; to save money she should consider to share a flat and not to have one just by herself.

I spent 5 hours in Bologna wandering around the central district. I did not find it dark or gray at all. In fact, I found it rather colorful. Many of the buildings were painted in shades of burnt orange and gold shades which I found very pretty. Also, the arcades are great for walking around outside even when it's raining.

There are some beautiful churches and amazing food in Bologna. It's very flat and easy to walk around - but watch out for those scooters, there are a ton of them in Bologna! It is also quite a young city, which was one of the first things I noticed walking around. Lots of great fashion too. Sorry I can't answer any of your other questions. Have fun!