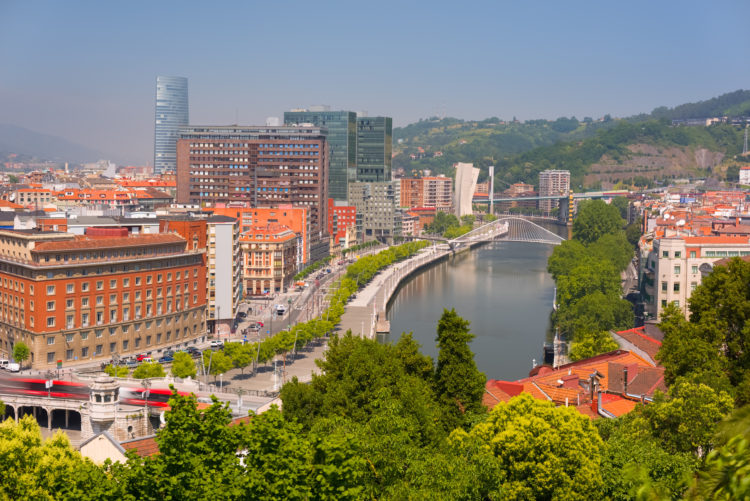 Bilbao is the fourth biggest city in Spain, but the culture reflects a much bigger place. What you find in Bilbao is huge affiliation to some serious rock music. Bands doing European tours invariably do a gig in Bilbao; Radiohead, U2, Red Hot Chili Peppers, and Coldplay have all performed here recently.

Bilbao is located in the autonomous Basque region. It feels more “European” than other cities in Spain as the character of the locals is more reserved and frankly quieter. Again, you have to look at recent history to see what happened to the city and why a pivot was important.

Situated on the banks of the Nervión, Bilbao is the largest city in Spain's Basque Country. Milder and rainier than most other parts of Spain (temperatures here rarely fall below freezing in winter nor rise much above 25°C even in the height of summer), the greenery of Bilbao is both a blessing and a curse: the climate here is as much a welcome relief from the heat of the dry plains in the south as a thorn in the side of those hoping for a day at the beach. But the shore of the Bay of Biscay isn't really the main attraction—instead, Bilbao is perhaps the best place in the world to experience the ancient culture and language of the Basque people, which has stubbornly held its own over thousands of years and is now completely unlike any modern-day culture in Europe.

I haven't been to Bilbao (how's that even possible?), but to San Sebastian and Comillas. I spent a lovely long weekend with my then-boyfriend which pretty much consisted of eating our way through the menu of a restaurant each night. You see - it was raining when we arrived, and didn't stop until we left! Again, I don't blame the weather... after all, it was really a great weekend despite the downpour - and there's something quite cool to just spend your day having pinchos :)

Bilbao has the most public transportation connections of any city in Spain. Between the metro, the Bilbobus, the Bizkaibus, the Euskotren and others you can get pretty much anywhere for really cheap.

Student from Bilbao here, currently in Erasmus in Poland, but I can answer your questions!

I don't know about UPV popularity. I personally am from Deusto and know that it IS a fairly popular university for Erasmus students (mostly humanities), so it's possible that same might be the case for yours. When it comes to difficulty, all of the people I know of that go there tell me it's hard but it's probably like that for the rest of universities in Spain. Also, chances are your courses will be tailored for Erasmus people, meaning that they won't be as hard and take up as much time so you'll be able to have enough free time for partying ;). Also, the city is not too big, but there are lots of foreign students and also local ones who are always interested in meeting new people.

When it comes to rents, Bilbao is not too expensive, but it isn't cheap either. I would suggest you rent an apartment on the student-friendly "outer" parts of Bilbao like Deusto or Sarriko which are near the UPV, given that San Mamés, Moyua or Abando are more expensive than normal (there could be exceptions though). Unfortunately I'm not aware of UPV's student dormitories, but the university of Deusto does. Normally they're small and shared, enough for a student to survive and they cost around 300€ per month so expect rents to cost 100€ or 200€ more. If you have the money I'd suggest renting an apartment. They are perfect for the erasmus life, honestly, even if that requires spending some more money.

The majority of the people in Bilbao can speak at least basic English. A great majority are also very sociable people, so even if it's haphazardly, you will be able to communicate with them. Bilbao is located north in Vizcaya and it's a region where Euskera is not as present as in the southern or eastern parts like Guipuzcoa, but people still use it. I'm sure you'll be able to learn some Spanish and even some Euskera too.

First thing to know when you come here to Bilbao is to acknowledge that people take politics somewhat seriously here. I've heard many friends from other countries describe Spaniards as people with strong political opinions. In the case of the Basque Country, the hot topic is independence, with all that it entails: the language, the culture, ETA which just dissolved last year, etc. It's a fascinating subject and you'll be able to find out about Basque history and culture while you're there, but you will find people with lots of different opinions and ideologies. It's very possible that you won't leave Bilbao without having had a spicy political debate. Another thing: Spain is a big and varied country. I know the first thing that comes to mind for many people is tortilla, paella, toros and flamenco. Tortilla is popular here. Paella not as much. Toros used to be big in Bilbao but now they're widely hated among the Bilbainos. Flamenco is definitely not a thing here and is pretty much only typical from Andalucía. However, food, alcohol and music are awesome no matter where in Spain you go to. One last thing: I don't know where you're from, but in Spain we eat late, we have dinner late, we go to sleep late, but we wake up early, so make sure you sleep and rest well.

Bilbao was traditionally a very industrialized area, something ingrained in it’s identity and landscape (you will see chimneys and iron-made sculptures here and there), that in the past decades has gone through an amazing transformation. Nowadays it’s a clean, modern city, with plenty of cultural activities (like the Guggenheim museum, the Fine Arts museum, the maritime museum or the Azkuna centre commonly known as “La alhóndiga”, which is the spanish word for corn exhange), green areas, or the opportunity to practice water activities in the stuary (like canoes or boat parties). The old part of the city (the seven streets) has a more traditional style to it, with old-fashioned commerces and stores.

Bilbao, being a small city, has a quite efficient public transportantion service. People generally use the underground, trolley car and buses are also available, but unlike much bigger capitals you can walk pretty much to anywhere. About nocturnal leisure, it offers diverse options, ask a local depending on your tastes, from bars with lively climate to clubs to dance and afterhours it will have you served.

About food, there are plenty of good options, but it’s rather expensive compared to other regions of Spain, again, ask locals. Good quality traditional basque uisine can be found at reasonable prizes in many places, and it’s almost guaranteed in most batzokis (politics apart). Also, here we don’t do tapas but pintxos instead (the difference being the food is in a spike, generally a toothpick).

People can be a bit reserved at first, and tend to go out in sort of “friend groups”, so you will quite likely know someone and fit in his/her gang.

Also, we speak loudly. Like, really loudly. Don’t say I did not warn you.

The main language of Bilbao is Castillan, although Basque is becoming stronger, especially among young people. The best advice is to go to the tourist office located in the Plaza Circular and ask any questions you may have, both about the city and its surroundings (San Juan de Gaztelugatxe, Álava winery, San Sebastián, etc ...) ). All the Basque Country (both the coast and the interior are worth it)

Is it actually a nice city? I've heard some say it's beautiful and others say it's quite industrial.

It is a lovely city. The city has a very long industrial past, and that can still be seen across the city. But for the most part the city has underwent a total renovation, and now it is a vibrant service-oriented city, with a very high standard of living. Of course, depending on where you are, you might not see a single trace of industries or you may find yourself in some very dense industrial areas, but don't think of them as dangerous, contaminated places, as most of them are not, and the ones that might are being renovated as we speak. The city itself (City of Bilbao, not to be confused with Greater Bilbao) is not too big and most things are within a walking distance one of the other. For the rest, the city has a quite good public transportation system; you mostly won't need a car.

I love Bilbao too! It's both beautiful and industrial. There have been a lot of recent improvement and renovations, art everywhere, and the people are great.

The cost of living is higher than a lot of places in Spain, so be aware of that. Depends what neighborhood you want to live in.

I love the people, they are definitely a little more closed to begin with, but once you get to know them, you've got a friend for life.

I think there is a rugby club out in Getxo, so you might want to check that out.

Let me know if you have any more questions, I loved there for 2 years and loved it!

I can't really advise on the NIE as I'm Spanish and have never really known anyone that got it.

What I do know is that it is a wonderful city! I think it is industrial but not in a bad way. I'm from another Spanish city but I used to go there pretty often and loved it every time. As for the people, I've always said that I've met the most kind, friendly people while being there, so I think you will be fine!

About the living cost, the thing that would worry me the most is the price of renting a flat...I've heard it's not the cheapest, but obviously that depends on what you are used to! I'm not really sure how expensive life is in Ireland... My city in Spain is not a very big one so I guess it was just a bit cheaper than a city as big as Bilbao.

With rugby, I know my university had a rugby league and this was in a tiny university, so I'm sure Bilbao will have something like that. Just looked it up, according to their website, you would be able to join: http://www.universitariobilbao.com/

Anyway, good luck and I hope you enjoy the experience a lot!!!

Hi Jenny, I am currently on my year abroad working as an auxiliar in Bilbao and I have been reading your blog which I think is fab!! It 's so true :P I just wanted to ask you how you went about learning more Spanish while you were here? How did you meet people etc to go out with? thank you

I just want to say that I moved to Bilbao from the US almost two years ago and if I could I would make a life here. Lovely region, great people, lots to do nearby whether you like hiking, travelling, sports, etc. You'll have a great time.