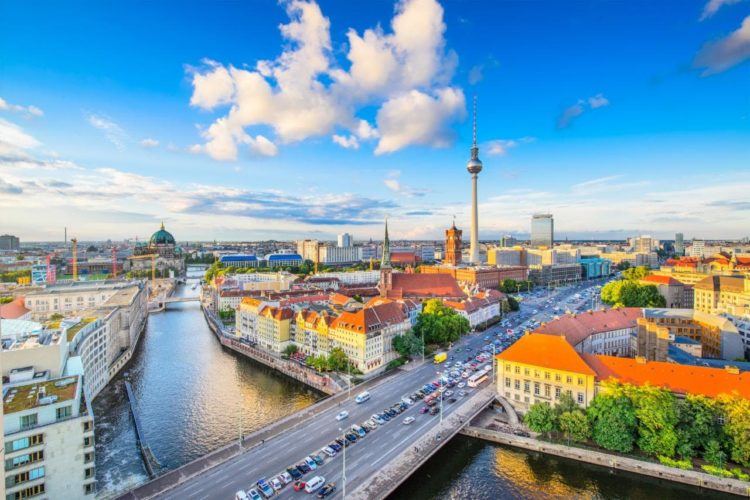 First of all, I know a ton of people who came to Berlin with a few hundred euros and made it work. With 10k in reserves you can definitely relatively easily set up some kind of life. Some things to consider:

25 - 30k after taxes and social/health insurance? This would be in Berlin not so bad, accordig the statitistics, the average wage in Berlin is 3700 Euro/months before social insurance and taxes. What corresponds to 25-30k netto per year.

Regarding the office work. Berlin has fewer number of office and adminsitration jobs compared to Dublin. But more graphic designers ;-)

So it will be hard. Decision depends on what you cabn lost in Dublin.

its certainly not easy living but might need a lot of work, i have no idea what the quality of life is in ireland, but i would say you'd need a fair amount of luck to come out of this and say "hey, that was really easy" as the rents have risen quite a lot in combination with no flats being available, and jobs outside of the it/startup scene are certainly not that easy to get especially for non-germans.

I can think of negatives for living in almost every place I have spent time but admit that my answer here will be more limited than it might be for almost everywhere north of the Alps. So here is my best attempt to critique a city I regard as a very good friend:

So that is my list and even I admit that it is pathetic. If you want a really good list, ask me the same question about Frankfurt or Bonn.

Winter! Very long, grey, cold, with short days… terrible. Also, did I mention the ice? Count on a solid foot of black ice on sidewalks. The city hires private contractors to clear the streets of snow and ice and when they miscalculate then there is just nobody taking care of things. If you plan on spending a winter in Berlin pack like you are going on a mountain hike in the winter. No kidding.

There is a general assumption that life is tough and everybody bemoans it constantly. It is part of the culture to openly show ones reluctance to perform any task under those circumstances. Be prepared for extremely grumpy service and more than a handful of furry eyeballs at official places and private businesses alike. This goes hand in hand with the trademark Berlin sense of humor which is asinine, sarcastic and snarky.

There is no open container law so completely inebriated hordes of young foreigners are the chanting, flashing, barfing face of the public transportation system at nights.

Outsiders of any kind are expected to prove themselves before they are trusted and integrated. Don't expect open arms. This is true in business as well as in private life.

Berlin is surrounded by former socialist countryside and there is an abrupt change culture as soon, as one leaves the immediate city. People are generally friendlier and poorer in the 'countryside', more petit bourgeois and also quite happily openly racist. However the city of Berlin also has a history of large, politically polarized, activist groups. This is true for the anarchist kids as well as for openly neo-nazi groups that roam the city. At times this creates an air of politically motivated physical violence. The Berlin police department is more than prepared to join this stew with well practiced swat and riot teams. It can be quite scary.

Should I go on?

There are a lot more positive aspects of Berlin, but I do have some gripes:

Like I said, there's a lot more to love!

Oh no, not another starry eyed under informed idealist...

you are in for a rude and very expensive awakening!

Please read extensively about life in Berlin here on Toytown. Rental prices and cost of living have rocketed in Berlin, and the town is full of bad startups that exploit expats for almost no pay, usually firing them after six months (the period within which you can be fired for no reason whatsoever, and with no protection by labor law).

I have lived there, both during the artistic David Bowie heyday of pre-reunification as well in the mundane sleek capitalistic now.

The change for the worse, even in the past ten years, has been horrendous.

I never experienced Berlin in its prime, but friends who have lived there for many years agree with Metall that the city has changed a lot over the past ten-fifteen years, mostly for the worse. This was probably unavoidable once the capital was moved to Berlin, there is nothing to kill a city's buzz like tens of thousands of government bureaucrats moving there...

@ David, whilst the chances are quite against your plan actually working out, I think you should give it a try, but put a bit more planning into it than you seem to have done so far.

Start learning German, for a start!

Get yourself a cheap flight, and take a couple of weeks to really explore the city - not just the tourist hub, but the further out of town, cheaper districts, where you are likely to end up living if you do not have the funds to stay in Kreuzberg.

Start networking with people who have lived here for a while, and see what they consider to be the pros and cons of living in Berlin.

Consider your skill-set, apart from the arty-farty bit, what can you actually do? What skills do you possess?

And finally, start saving-up. However much money you already have saved, it can never harm to have more!!!

There aren't that many. I have been living in Berlin for 6 years, and, really, this city is awesome. It has become super comfortable over the years. It was rougher before. More jobs (interesting jobs!). Exciting.

I like this city very much. But at the same, I could also be happy living somewhere else. I am not complicated.

Hi David, I'm in a somewhat similar situation to yourself. I'm moving to Hamburg from the UK in June to live with my girlfriend. Having a German spouse has made life relatively easier for me, as she has been able to make enquiries on my behalf with the German authorities.

For point 3, I would suggest you register with the nearest arbeitsamt (job centre) upon your arrival in Berlin. According to my girlfriend they will register you as 'job seeking', so when your German improves they might be able to refer you to an agency that deals with temporary work contracts. Bare in mind though this is what my Girlfriend has found out from the authorities in Hamburg, given Berlin is in a different state the procedure might be different. As per previous comments, I would also advise starting to learn some basic German now (I use Duolingo so I at least know the basics) and then register for an intensive course when you arrive.

As far I can see, there is not a whole lot of red tape involved. When choosing health insurance in Germany, the company should contact HMRC for an S041 form. Tell any companies or bodies in the UK who you think it may be prudent to inform of your move (local councils, utility companies etc.) You must make sure to register your residence ASAP (I think it's around within 3 weeks you have to register). For my registration all I need to take is my passport, a 'proof of residency' (my girlfriends parents have very kindly agreed to write me a letter stating my residence in their home) and the princely sum of 12 Euros!

For tax I believe you will need to contact HMRC - I may be slightly incorrect but you send them a P85 form, along with parts 2 and 3 of your P45, which states you are leaving the UK to register in another country, and therefore no longer subject to paying tax here.

Long story short, people (and what I originally thought) tend to think moving abroad is a red tape nightmare. However it really is rather straight forward. The vast majority of the stuff you'll need to do will be upon your arrival in Germany.

I hope this helps, best of luck with your move!