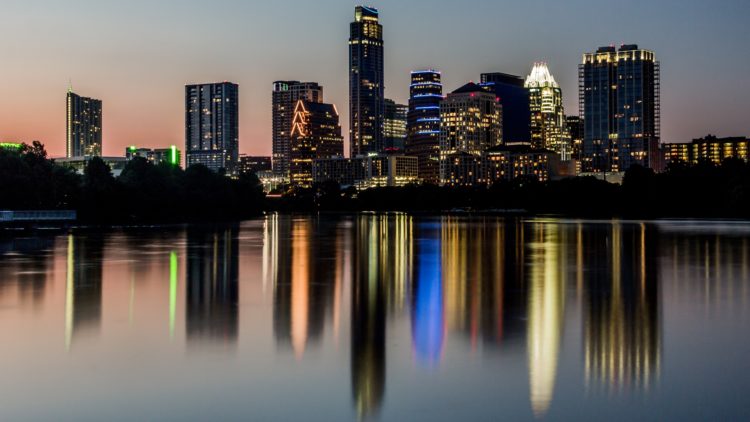 The cost of living is high compared to the average salary. Of course, it all depends on you income, not the average, but based on what you have stated it will be hard to live in the city proper.

You will likely be able to find some sort of job without serious problem; I have no idea on the lutherie market, though.

There really aren't any 'terrible' areas of town, imho, but you will likely be forced either to the outer suburbs or into an apartment in a 'rougher' area of town. At least, based on what I assume your combined incomes will be.

I am guessing you will have to be outside of town somewhere, the cost of both renting and buying is a bit extreme at the moment and is based more on the typical hi-tech salary.

I think you'd both enjoy Austin. GREAT music scene, and yes, I think he'd find a market in the guitar tech business.

The downside is the reason Austin costs so much is because people want to live here, and there are a lot of people in the high tech industry who make a lot of money.

My guess is, your standard of living in Indiana - what you can afford in housing - will be better than what you could afford here, but you might enjoy a quality of life in Austin that makes up for that.

I have family in Austin. Wells Branch is a good neighborhood within the Austin City limits. Pfleugerville is also a good suburb. Cost of living in those two areas can be pretty steep compared to the rest of Texas, though. It depends on your budget. There's a fun quiz here which might help you get started. move-to-austin.com/austin-tx-neighborhood-quiz.html

There's also a Facebook group called "Free Fun in Austin", which we've used to find things to do when visiting with the kids. You can always use that to get a gauge of what's on in the neighborhoods. The members there might be able to help you out too.

Even good things go bad, and with the great influx of new residents, traffic in Austin is only getting worse and worse. Unfortunately, the transportation infrastructure just wasn't made to handle this kind of growth. When choosing a place to live, it’s worth seriously considering your expected commute time to and from work, as this is probably the biggest complaint people have about living in Austin. However, with all the amazing positives Austin has to offer, traffic is the only real downfall we find.

ACL, SXSW, and Fun Fun Fun Fest are huge festivals that take place every year in Austin. The population of the city grows seemingly exponentially while these festivals are in town, and in our experience, you will either love it or hate it. It’s a time when some folks just leave the city and rent out their place. Traffic is already an issue in Austin with only two major highways traveling North and South-- couple this with thousands of people flocking to the city and it’s probably not hard to see why some people decide to just leave the city during festival time. It’s the price we pay to live in this great city, and it’s likely something you’ll want to be aware of when choosing your new neighborhood. On the other hand, it is really amazing to be able to attend these festivals in your own backyard.

You are on point in the tremendous growth the Austin market has seen in the last 5+ years. Texas real estate in general is booming and the secret is out. Simply put, the 30% property increase in Austin can be attributed to supply and demand. There’s been a crazy influx of investors pouring into our market while the housing supply remained relatively the same. And when supply can’t keep up with demand, prices get driven up.

Austin still has a number of areas to be tapped into in terms of investment properties. The best margins are seen with new construction (for obvious reasons). Also, I would suggest buying and holding properties for appreciation if you can afford to take on that strategy. Don’t hesitate to reach out if you wish to chat about anything in further detail.

As with any major city, making the transition to Austin life can be a tricky adjustment. But once you relax and let yourself enjoy the beautiful weather, the friendly people and the unbelievable breakfast tacos, you'll find yourself wondering why you didn't move here long ago. So get out there, soak up the natural beauty, enjoy a locally-brewed beer, nosh on some top-rated barbecue and commit yourself to keeping Austin weird!

I live in Austin. As a matter of fact, Austin ends at my back fence. I've been here for 13 years. My husband and I are part of the creative industry here and I have to say it's one of the most open and collabrative places we've ever lived. During SXSW we log around 6 miles a day walking from venue to venue to see wonderful love music from all over the world. We do live on the outer reaches (on 2 acres on the way to the Salt Lick for you other Austinites). We also work from our home studio. So, we don't deal with the traffic. But, it is horrible for those who don't live downtown. Also, as another poster said, Austin is way behind in building out public transportation. However, I will say that as part of the music/creative community here, there is a heartbeat and a comaraderie that is hard to beat. Austin has a soul. It has it's own special energy. And I love it. And by the way... I don't live in Texas, I live in Austin. ;-]

Austin is increasingly becoming an unaffordable place to live. Even those in the tech industry are finding the cost of homeownership unapproachable. There is more than downtown and the East Side. More than tacos and brisket. More than the music scene. Also - walking is tough. Dangerous, too. Every red light gets run. Drunk drivers abound.

Austin is by far less humid. 82 here is like 112 in Austin. Few in Austin understand. Also, if anyone in Austin says the mosquitos are bad you need to know where the nearest urgent care is because you’ll need to be sedated from laughing so much.

Alamo used to be better but they are a chain now. Moviehouse & Eatery or Violet Crown is what we do.

From someone who has lived in Boston and Washington, the people here really are that nice as when you visited. The Austin subreddit is fun... but yea... lol. Most of the unwelcome feelings come from people not reading the sidebar which has all the info, we get tired of playing the repeater. Austin is great and not for its tourist crap but for the large variety of things you can do at anytime. As soon as direct flights become a thing at the airport and traffic is fixed a bit it will be perfect. Hope you enjoy it here as much as I have.

Austin is a wonderful city with great food, and good people. But it is far less livable than it was 10 years ago. Real estate alone is reason for me to never go back. And it's a tiny blue dot in a very large red state, if that matters to you.

I absolutely love to visit, and wish we were millionaires so it would be easy to buy, and easy to leave Texas easily to travel more, because when you are in Texas, it takes a very long time to get out by car!

I've found the people of Austin to be incredibly friendly, much more so than in the north. We have a monthly meetup put together by bulletm, not a ton of people show, but around 15 or so, and we're all very nice and sociable. Welcome to Austin, you're going to love it.

I did find that part of Austin amazing. The fact that people willingly gather and socialize with their neighbors. Several of the apartment complexes we looked at host regular "meet up" events to encourage networking. I have lived in the same place for years and couldn't tell you who any of my neighbors are, and random conversations like we regularly had with strangers in Austin would NEVER happen up here where people avoid eye contact or even acknowledging other human beings. Definitely found Austin to be a breath of fresh air.