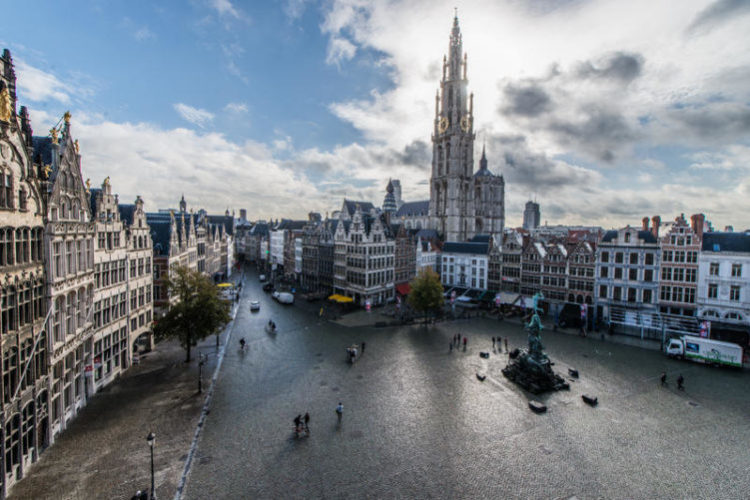 Antwerp is a rather busy city, so it’s actually a good thing that you don’t need to be in the city centre every day; you’ll come to enjoy the peace and quiet you get from living outside the centre.

As for meeting people: Antwerp has been a multicultural city for ages, so people tend to be comfortable with foreign folk. There’s also no shortage of activities in the city: concerts, festivals of all sorts, lectures, galleries and special exhibits,... just go to some events (alone or with a coed) and try talking to some random people. The average Antwerpenaar won’t mind at all.

Belgium also has a longstanding tradition of student clubs, called “studentenverenigingen”. Nearly every college or university has at least one. Most of these clubs are affiliated with a specific field of study: economy, biology, computer science, physics-maths, ... They normally present themselves to the new students at the beginning of every academic year. Note that joining such a club will allow you to quickly make new friends, but that you’ll be required to go through a hazing ritual known as “ontgroening”. The intensity/grossness of this ritual varies from one student club to another.

You could also join a student choir or orchestra (if you play an instrument), or join another university-run club or team. I don’t know about Antwerp in particular, but many universities/colleges offer chess clubs, sports teams, ...

As for general tips: Antwerpenaren (the ‘native’ inhabitants) are known for their assertiveness, so it’s advisable to act in an assertive manner yourself as well. The city is also known for hard drugs and occasional violence: ask a fellow student for advice on where you certainly shouldn’t go. You should be fine as long as you don’t wander off into the wrong neighbourhood. Overall daily life is comparable with that of any other large multi-cultural city.

I've lived in Antwerp during my Erasmus for 6 months last year and it was hands down the best year I've had. Antwerp is central and easy to access from everywhere, it's not too big (I live in Istanbul, a city with 15+M people, so Antwerp was very peaceful for me) nor it's too small. I never, ever felt unsafe in the city even though I'm usually super paranoid and shaky. I've never witnessed a crime or heard about something big happening. I've done my fair share of partying and tbh I've never seen that infamous cocaine stuff, it's just regular weed usually.

Food is not cheap, so I'd suggest cooking at home, even though I was very lazy to do so.

I'm here if you have any questions to ask!

Born, raised, living and studying in Antwerp so I'm biased but I think (and others have told me) Antwerp is probably one of the best cities in Belgium to live in i̶f̶ ̶y̶o̶u̶ ̶d̶o̶n̶'̶t̶ ̶m̶i̶n̶d̶ ̶t̶h̶e̶ ̶b̶a̶d̶ ̶a̶i̶r̶ ̶q̶u̶a̶l̶i̶t̶y̶ . It's not too big but it also never really gets boring, always plenty of stuff to do and unlike what some others might say, it's safe. The worst things I've experienced here are 1. I've seen a fight 2. my bike got stolen once. One thing you have to keep in mind is that most stores close at 6pm, supermarkets stay open a little longer.

Meeting new Belgians can be tricky since a lot of us seem to be very standoffish. Like others mentioned before me, joining a student club is an easy way of meeting new people but partaking in the hazing ceremonies is NOT necessary at all. You should definitely consider joining ESN, a student club for international students. They have all kinds of cool activities to get to know each other and the city and they also organise trips to other cities such as Amsterdam for example. They organise a lot of parties and events where you'll be able to meet both foreign students as well as Belgians. There's also the Buddy Program which pairs you up with a local student who can guide you around and show you the ropes. (I'm a Buddy btw so hit me up if you want to know more!)

For most of the above you'll have to travel to the city centre though. If you live in Wilrijk, near Campus Drie Eiken, you can take a 15 minute bus, buy/rent a bike or get a Velo card.

Welcome to Antwerpen - in my opinion, Europe's greatest drinking hole.

Check out "The Kulminator".... Supposedly the bar with more differenrt ales on sale at any one time - than any other on the planet.

The eateries in Antwerpen are just wonderful - and there's such a variety.

Anywhere to steer clear of?.... I'll get back to you on that one if anywhere comes to mind. There's nowt ringing any bells at present.

I have a friend who lives on (I'll probably spell this wrong) PaleisStrat. It's a lovely part of the city, 5 floors of apartments (rather Dutch - by design, although I'm sure locals would disagree) and only 15 minutes walk from The Centre.

Do you speak the local language? You don't? You think Durch is difficult? Flemish is even more so - for me, anyway.

One of Europe's gems.

Hi and welcome to Antwerp, it's my hometown.

Yes your questions are a bit vague :)

Which areas of the city would you recommend to live in?

That's a very personal matter and not too easy to reply to. Various districts of the city attract residents for various reasons.

The centre (within the belt that we call 'de leien' Italiëlei, Frankrijklei, Britselei, Amerikalei - postal code 2000) is a bit more expensive on rental, but offers advantages like being close to everywhere and it offers excellent public transportation in all directions. There are various sub-districts in the centre as well.

Then you have the various districts right outside the leien, and they all have their own identity.

After that you have the suburbs, the former municipalities of Borgerhout, Deurne, Berchem, Wilrijk, Merksem, ..

A few questions to you. Will you have a car or will you depend on trams and buses (and trains)? Would you like to be close to a specific location, like a working address or something like that? Are you moving to Antwerp for a certain time? Do you need a furnished apartment?

Do you speak Dutch?

I just see that you've mentioned Belgium as a homecountry...

I love the city but gotta admit many Antwerpians are not the friendliest people around, althoght I'm white I almost got attacked by a friggin' nazi the other day only for not speaking dutch (arrived just a few months ago). I can't move to another country because of my scholarship so I hope I meet more open minded locals sometime...

Antwerp isn't really dangerous. The most shady neighborhoods are north and east from the central station. The city isn't that much more expensive than others.

Anwerpen also has its own airport, but only for flights from Manchester and London. Brussels international (Zaventem) has direct trains to Antwerpen Berchem and Central in 30 minutes. Amsterdam is also very convenient and has direct trains from Antwerpen. Eurostar from London + local train in under 3 hours.

The city has a large network of cycle lanes as well as the Velo public bicycle hire scheme. Various passes can be bought from the Velo website or from customer service offices near the Stadspark and the zoo. After receiving a card, people are able to take a bicycle from stations across the city before dropping it off at another station closest to their destination. Check the information sheet here.

Beautiful place. I was there once for three weeks in July. I wish to get to know with somebody from Antwerp because it was really hard to meet a citizen. Everybody was going with its own business.

my city i dream of

What I like about Antwerp is the public transport, you can cheaply get around with the trams. The prices for regular stuff are all right (I can only compare it to german prices though) and you will find a lot of belgian specialities! Try some Flanders dishes!

I can also recommend learning dutch, but english will get you around - just never tell an Antwerpenaar that you think they are dutch ;)