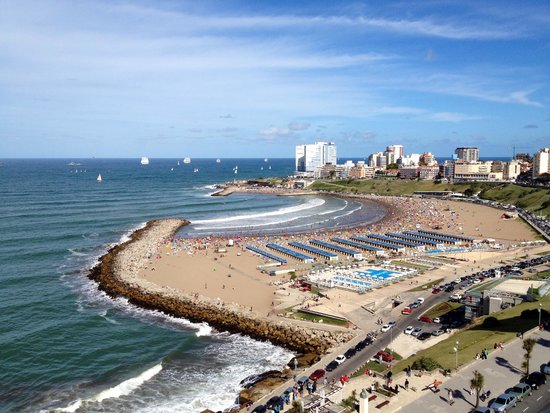 We definitely do not go back to Mar del Plata. This is nothing special, just a regular city with lots of street dogs - the poor things are probably transporting diseases from A to B, the city should at least kill them so that they do not keep reproducing.

We were traveling in Argentina and my husband wanted to check out Mar del Plata although we had read about its downfall. This was very famous during the 30s-40s. Today this is nothing special and surprisingly dirty. This is the price of overdevelopment and of having too many people around. We did not even feel as if walking on the beach. Plus, they have so many of these private beach spaces with chairs, umbrellas and huts.... not ok for my taste. It is a "visual pollution".

If you visit Mar del Plata, be aware that they charge extra at this La Rueda Parrilla. The waiter charged us about 10 dollars more (maybe this was the price to be seated on the table?). We paid without asking because the food was ok and cheap. When the clients were up to leaving the restaurant, they would encounter the owner standing close to the door. This guy would kiss their cheek. We thought that this was very strange - it did not make any sense to get a kiss from that guy. In order to leave without "the kiss", we waited for the guy to go far from the door and then we left. He quickly ran towards us but then we were already outside and just waived. This was so funny!

We stayed in the Hotel Iruna, our room was very basic, with old (not antique) furniture and there was only a fan in the ceiling (no air conditioner). This could have been a disaster in a very hot summer day but we were lucky with the temperature. Be sure to have room with air conditioner if you go there during the summer. The breakfast of this place was very good. For the price, I cannot complain about the room or food. Overall, we simply did not like Mar del Plata. We enjoyed ourselves much more in Mendoza and Buenos Aires.

Well, I can't speak about the country as a whole because I'm under the impression that people from other cities live quite different realities. I don't think Mar del Plata is currently going through its best period in time: crime has clearly risen and it is a matter of great anxiety for many people. I grew up in a middle class neighborhood and lived there for most of my life feeling relatively secure, however nowadays many neighbors have been mugged. Some of them have even been kept prisoner in their own homes while criminals ransack the place. I worry every time my parents go back to their home and open the garage doors to park their car inside (this is a moment of special vulnerability which is often used by muggers). I think the worst part of it all is the utter feeling of impunity, knowing that even those who are captured rarely even are punished by the justice system as they should be.

Economically we're clearly not living a very good moment. The government is using drastic measures in order to stop the leakage of capitals and control the inflation. Once again, the feeling of impunity is strong since the government lies constantly (the main statistics institute was intervened a few years ago in order to stop it from revealing the real numbers), politicians are corrupt and earn far, far more than the average guy, taxes are ridiculously high...

Inspite its many problems, I still love my country and Mar del Plata too. The ability to survive great economical crises is present in the genes of the average argentinian. It's sad, however, that average guys needs to employ so much effort to cover their basic needs instead of focusing it on creating new things and contributing to mankind in their own ways.

Well, most porteños I know are good, caring people. However I must say that porteños sometimes do fit their national stereotype, specially during summer when Mar del Plata gets overrun by them. As I said in a post before, it kinda looks like the identity of the city changes during summer (because of the large proportion of tourists among the local population) and it becomes a bit harder to live here. Examples: you do hear far a lot more car horns, the city gets far dirtier than usual, it becomes harder to walk around downtown because of the presence of so many cars and people walking between them. They don't hesitate to walk into you and bump you out of the way. Also, colectivo lines. We marplatenses don't do colectivo lines. We simply act with basic courtesy, we all get into the bus anyways. It annoys me when people react strangely and think I'm trying to cut my way in. They are the ones that should adapt to our city, not me.

It does look like they feel Buenos Aires is the center of the world. It annoys me that some basic errands require me to travel 400km to Buenos Aires and spend $400 in bus plus food and local transportation (example: goods trapped in customs). But this probably has a lot more to do with the centralization of our country in a single city and less with the average behavior of the porteños.