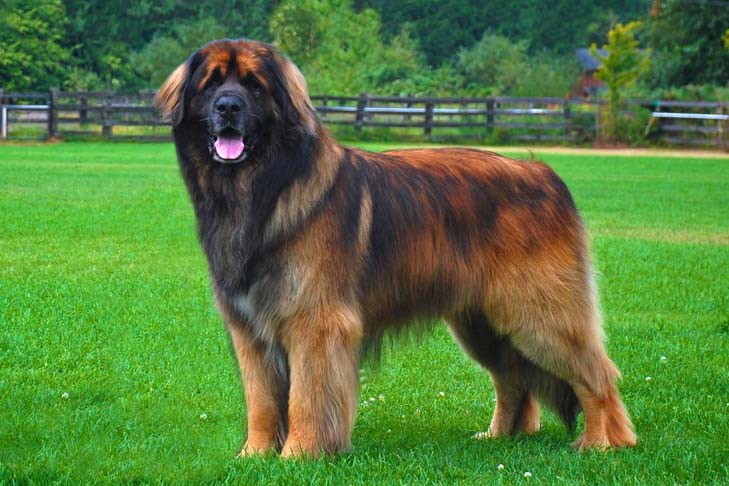 The Leonberger enjoys swimming, tracking, agility, therapy work, pulling a cart or sled, and weight pulling -- all productive outlets for his energy. Fetching a ball or Frisbee, however, is not a natural activity for this breed.

Leonbergers are not supposed to be droolers, but those with loose lips will slobber when food is present, or when stressed. And most Leonbergers are messy drinkers who slobber water everywhere. This is not a dainty dog for fastidious housekeepers.

Many Leonbergers have protective instincts toward strangers. They need extensive exposure to friendly people so they learn to recognize the normal behaviors of "good guys." Then they can recognize the difference when someone acts abnormally. Without careful socialization, they may be suspicious of everyone, leading to either aggression or shyness.

The Leonberger is a very large breed, proud and majestic in appearance, with a characteristic black mask. The females will be slightly smaller. The skull is domed. The medium-sized, pendant ears flank kind and gentle brown eyes. The face will have a black mask, which should not extend above the eyebrows in show dogs, and the nose and lips are black. The teeth meet in a scissors bite. Unlike most large breeds, the Leonberger has a dry mouth, and therefore doesn't drool. The powerful neck will have no dewlap. The coat is long and rough-looking, with colors that vary from tawny to reddish-brown. Black-tipped hair on the outer coat is acceptable in show dogs, as is a small white star on the chest, or white on the tips of the paws. Males have a larger mane than the females, and can take up to four years to develop. Both the front and rear legs are feathered, and the rear dewclaws should be removed. The tail is set low, and long, reaching at least to the hocks, and bushy. The feet of the Leonberger have black pads, and webbing between the toes which helps in swimming. The coat is water-proof.

The Leonberger, like most giant dogs, is usually calm and confident, kind and gentle, and considered to have a sweet expression. They are intelligent and friendly, and are very patient, even with children. Rather than showing aggression, the Leonberger normally walks away from misbehaving children. Obedience training is important, but the trainer must be patient - harsh training methods do not work with this breed. The Leonberger is considered agile for its size. They get along with other dogs, but must be well-socialized, as early as possible.

The Leonberger sheds heavily during season, and should be brushed and combed daily, but other than that time, weekly brushing is fine. Always check behind the ears, the tail, and the feathering on the legs for mats. The ears must be kept clean to avoid ear infections, and teeth should also be brushed on a regular basis. Bathe only when necessary.

they are lovely - real gentle giants....I have a friend who has one, will ask about grooming....

I refused to have a long haired dog, so got a greater swiss mountain dog...have you looked at those? (we new them from spending lots of time with them in switzerland), he is the most amazing family dog.

If your interested in them PM me...there are some undisclosed health issues with some of the breeders in the UK however

Leonbergers are lovely I am lucky enough to work with a lot of them.

Things I would consider

Physical logistics of moving that size of dog.

Vets bills will be considerably more expensive as most drugs are dosed by weight.

They do love water so can bring in a lot of dirt.

It is very likely that unless you go out of the UK for a pup you are going to wait a fair while. I delivered a litter recently every single person who will be buying a pup had been waiting for over two years and as the litter was small there were several disappointed people.

There are three Leonbergers in my dog training classes and they are gorgeous dogs. However they are absolutely massive. Because of their size they need to be impeccably trained, e.g. if they decide to pull on the lead no one can hold them. They belong to two different owners and they both keep them in outside kennels partly because they get too hot indoors and partly because they are so large they are walking disasters around fragile ornaments, etc.

Leonbergers need a large amount of interaction with people. They are generally good with other pets if properly socialized but can be dog aggressive.

This breed is ideal for a guardian who wants a large, active dog that can be taken hiking, backpacking, sledding, carting and swimming. Leonbergers do not do well left alone for long periods.

Met 2 Leonbergers when taking my cat to the vet. Absolutely huge beasts, but also really smart and friendly. The owner said the pair try to work together to distract him if they want something. One of them tried to get treats from the owner by trying to make him jealous too (the Leo was cuddling up to the other people nearby including me which I wasn't complaining about). Found out about their history that day and it was incredibly sad, as these dogs seemed to be such friendly giants.

The Leonberger is a giant dog breed. The breed's name derives from the city of Leonberg in Baden-Württemberg, Germany. According to legend, the Leonberger was ostensibly bred as a "symbolic dog" that would mimic the lion in the town crest.

Originally from Germany, where he was created through crosses between Newfoundlands, longhaired Saint Bernards, plus some Great Pyrenees, this giant breed requires a commitment to training and a high tolerance for mischief and mess. He looks beautiful in the show ring, but his natural state is more along the lines of damp and muddy than leonine elegance. That, along with long fur and copious shedding, makes this a poor choice for neatniks. Early and extensive socialization and training with plenty of positive reinforcement and consistent expectations will turn him into a family friend like no other, but without them he's mischievous and destructive.

The Leo's high energy levels and intelligence make him a super competitor in agility and obedience trials, and he's also found doing therapy visits and water rescue work. Leos like living in a pride of their own kind, but they get along well with other animals, too, including cats and horses. Because of their great size, they should never be left alone with young children. This is a sensitive dog who dislikes family arguments. Keep your disagreements private or he may try to intervene.

The Leo loves being with his people and won't be happy to spend all his time alone in the backyard. Expect to give him about an hour of exercise daily.Take the Leo's size into consideration before bringing one home; this breed needs a family with a yard and an SUV, not a studio apartment and a Miata. The coat sheds heavily twice a year and moderately the rest of the time. On the plus side, his deep bark and huge size are more than enough to put off any halfway intelligent intruder.

Someone brought a 9 month old Leonberger into my job a while ago. I said "Sir, I'm sorry, we don't allow bears in the store." But it was just to get his attention so I could stop and pet his dog. They are so hugely cute!

Most Leonbergers are wonderful, loving dogs, but due to their size and strength, they are NOT the dog for everyone. They require time, dedication, grooming and, above all, training to ensure a well-behaved dog. Buying any dog should be a lifetime commitment, so make sure you learn about the Leonberger before you buy. As with any breed of dog, do not buy a Leonberger if you somehow believe it will be a catalyst toward changing your life style. It won’t. Research and purchase a dog that matches your lifestyle as it currently exists.

Leonburger's are awesome dogs, especially if you always wanted a pony.

Because they are huge. And you could probably put a saddle on a full grown one and ride it around. Like a pony. A big, fluffy pony.