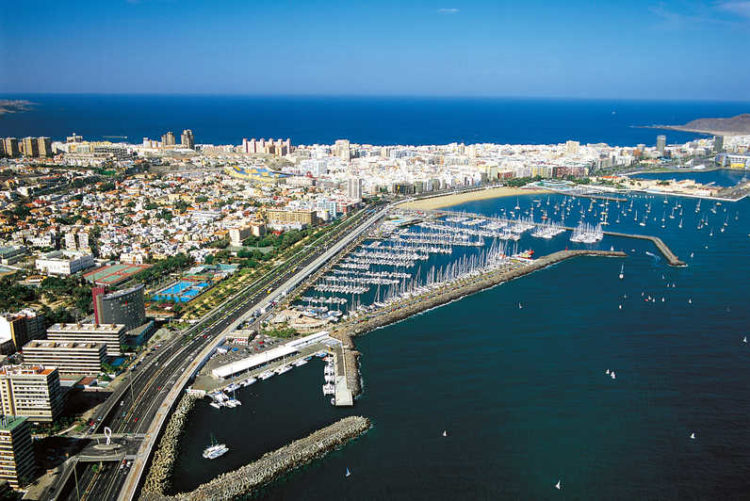 Las Palmas is a big bustling city but it is very spread out so you don't have the big city feel. The cathedral area is about 4 kms from the beach and shopping area, and I suspect night life but I have only done day trips, and both have bus stations to take you to the quieter parts of the is;land if you want to get away from it all. I'd say go for it. it isn't a big island so you can find so many different 'atmospheres'. I'd stay in the Hotel isabel if I stayed in a hotel but definitely I'd go for Playa Canteras. The paseo is much nicer than the promenade des anglais.

P.S. Almost every town in the Canaries has a house Columbus stayed in!

Las Palmas has a mainland-Spain feel, spiced up with an eclectic mix of other cultures, including African, Chinese and Indian, plus the presence of container-ship crews, and the flotsam and jetsam that tend to drift around port cities. It’s an intriguing place, with the sunny languor and energy you would normally associate with the Mediterranean or north Africa. The hooting taxis, bustling shopping districts, chatty bars and thriving port all give off the energy of this city, which is Spain’s ninth-largest.

The historic harbour is on the eastern side. To the west is the famous beach of Las Canteras, with its kilometer-long beach promenade and many hotels, restaurants and shops. It’s the perfect place to relax and enjoy memorable sunsets.

The crystal blue sea is perfect for bathing and surfing. In the evenings, Las Palmas becomes a veritable party stronghold with its numerous bars and clubs. The Canarian town offers lots of cultural attractions as well as sun, sand and sea including the Columbus House, for instance, where the seafarer Christopher Columbus spent some time, or one of the many museums.

Those who would like to experience the fabulous natural backdrop of Gran Canaria on foot would do well to visit the Bandama National Park, which is just south of the town. You can climb down a huge volcanic crater and admire the amazing views of the island from the rim of the crater. One thing is certain: boredom doesn’t happen on Las Palmas.

Las Palmas is a popular place to base a Canary Islands vacation. Not only is it the Canaries' largest city, it's also got a number of world-class attractions. Its beach — the 2½-mile Playa de las Canteras — is an attractive urban shoreline. Guarded by a barrier reef, the waters are gentle and suitable for travelers of all ages. And the promenade that backs the beach is a spectacular place for a sunset stroll.

Gran Canaria is no hidden gem — in fact, it is one of the most popular holiday destinations for Irish tourists.

And the reason why is no scientific equation. With 12 months of sun, it is the ideal location for those looking to unwind — no matter what time of the year it is — in temperatures that rarely drop below 20 degrees during daylight hours.

Two weeks ago, Buzz.ie's travel editor visited Puerto Rico — widely considered to be the party capital of the island of Gran Canaria — and here is her review...

I have been to both Gran Canaria and Puerto Rico itself on many occasions in the past — on this visit, however, my sister Lyndsey was getting married and so I decided to get a rental car from the Gran Canaria Tourist Board to help us get around the island better.

I have stayed a week at Las Palmas de Gran Canaria and stayed at a hotel downtown. The old town where the Cathedral is has plenty of charm and you can see the Casa de Colon, where Columbus stayed. The beach downtown is very, very long. There is also good shopping in the city.

LP is a lovely town, great beach with plenty of sun loungers on the west side & a busy port on the east side. Also on the east side is the sport harbour & in November all the big super yachts will be in getting ready for the trip over to the Carribean. You might also see one of the big cruise ships in port. The bus station at San Telmo would be your link to the rest of the island, the buses are cheap and the drivers very helpful, I've even seen them hold babies while the mother packs away the pram to put it in the hold.

I really enjoy working at las Palmas, I meet new people that will become long time friends. I liked meeting new customers and welcoming them. They enjoy the food and time there.

I prefer this beach because it’s not as crowded compared to Playa del Ingles. The whole boardwalk is lined with really good restaurants and gelato places. Convenient, Accessible and vibrant at night. Enjoy an awesome walk after dinner!!!

Gran Canaria is a prime choice for the sun worshippers and water babies who flock to its abundant soft-sand beaches. Its port, Las Palmas, is the biggest city in the Canary Islands chain, and it's often visited by cruise ships. The island enjoys a spring-like climate year-round. Expect sunny days, warm water and an average annual temperature of a mild 69 degrees. Gran Canaria gets just about 10 days of rain each year.

Like most Canarian cities, Las Palmas owns a distinctly Spanish feel and a rich history (the Canary Islands are an autonomous region of Spain). Conquistadors -- attracted by palm groves and a broad bay -- founded the city in 1478, and Christopher Columbus called there during his famous voyage of 1492.

The port's palm tree-lined streets are clean, well laid out and richly endowed with fabulous floral displays -- the city's gardeners make the most of the balmy climate. And you don't have to travel far to find a pleasant beach; the honey-sanded Playa de las Canteras lies just northwest of the downtown area and has the distinction of being one of the longest city beaches in the world.

The port also lies close to the internationally famous sea resort Playa del Ingles and the spectacular desert scenery of Maspalomas. Both are popular resorts year-round, so you will find plenty of dining and lazy beach options. Farther afield, visitors can discover quaint old towns like Arucas and Teror or explore Gran Canaria's volcanic interior -- a surreal moonscape of craggy gorges and gaping craters.

It's amazing! Several trips and many months in Las Palmas or San Telmo; lots of visits and short stays in Arechuas, Galdar / El Nio and further west to Agaete. Definitely visit the markets and try the food in Teror on Saturday; I've been pretty much everywhere on the island from the caves in El Hornillo to condos at Confital. I avoid the south (specifically Maspalomas, but not Port de Morgan) because it's an overpriced giant resort. If you are from the US, Burger King might be more expensive than you expect, but everything else is a bargain. Food is fantastic... Spanish lunch menu is typically 2 courses (dos platos) with a desert and often an appetizer or bread for 6-9 euro. Dinner is late in the day, but it's very common to find offers full dinner (paella, of course) with a bottle of wine for 2 people for less than 25 euro sitting by the beach in Las Canteras watching the sun set. Excellent tapas can be found for much less. Typically a full dinner with a couple of cervezas and cafe will set you back 10-15 euro. Of course, there are much cheaper (and better tasting) options the further you get from Las Canteras. Jamon y Queso Bocadillo (ham and cheese, usually local) is my favorite lunch (at pretty much every bakery), which cost about 2-3 euro everywhere on the Island. The DN scene is pretty awesome - worked out of a spot for DN's called CwC (https://coworkingc.com/) a lot for the past 3 years. By bus (the guagua) you can get from Las Palmas to just about anywhere on the island for less than 10 euro including some very remote places. Definitely check out the nature and try hiking around the volcanic caldera around El Roque Noble to get away from just about everything. El Roque itself will have lots of visitors, but the scenery is incredible from 2700+ meters above the clouds where you can see down to the sea.

beautiful city and houses and very interesting history of that place.You know,I'm kinda history addict and if you're interested you can find very useful info in Wikipedia about "Canary Islands in pre-colonial times"