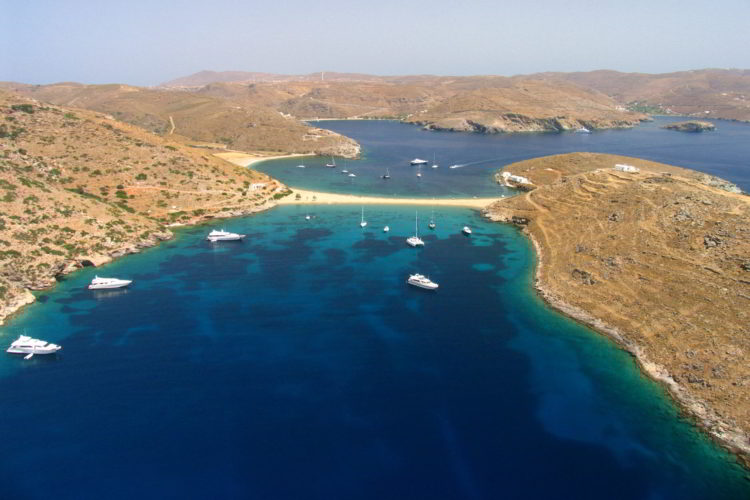 Due to its proximity to Athens, Kythnos in Greece is a frequent summer weekend destination for the Athenians. This is a lovely island with relaxing beaches and traditional style. Ideal for families with kids and romantic couples looking for privacy, this Greek island is accessible by ferry from Piraeus and Lavrion, two ports of Athens. On the northern side of Kythnos is the village of Loutra, famous for its thermal springs. Holidays in Kythnos is a wonderful experience that can offer total privacy.

Once you get to know Kythnos, you will realise why its name is derived from the ancient Greek verb “keftho”, which means “hide”. So much “hidden” beauty and authentic Aegean character, and just a short hop by ferry, really close to Athens. With a long history starting in the mists of the Mesolithic period, Kythnos, modest and hospitable, unexpectedly beautiful and serene, welcomes you.

It’s really strange when thinking how it is possible for a Cycladic island, which is so close to the overcrowded greek capital Athens, to remain one of the few unexplored paradises.

If Kythnos could reach out its hands it would reach Kea with one hand and Serifos with the other. Looking at it on a map it’s like a bird with stretched wings to the North and to the South as if it’s ready to fly, to get away from the deep blue Aegean waters and fly away to unknown places with all its treasures: the beaches, the beautiful landscapes , the golden sunsets, the scented gardens, the churches, the traditional houses with the red roofs, the picturesque streets, the lonely windmills, the ancient history, the archaeological sites, the thermal springs , the joyful and hospitable people.

Kýthnos is definitely the place for thermal tourism. A modern spa centre is in operation in Loutrá, with two hot springs in the area. The following springs have been famous for their therapeutic effectiveness since the ancient times, namely the spring of Ayioi Anárgyroi, inside the spa facilities, and the spring of Caucasus, at 50 m. from the first one, with a temperature reaching 52 degrees Celsius.

The festivals on Kýthnos have maintained their traditional character. All the locals take part, singing to the rhythms of the violin and the lute.

The coast is much indented - with many beautiful anchorages and ports - and for the most part falls steeply down to the sea. The inhabitants live by farming and fishing. In antiquity iron was mined on the island.

The two main ports are Mericha and Loutra. Mericha - only minutes sailing away from the oddly shaped Sandbar Bay - is the smaller of the two. Loutra on the north-east nowadays even has a new harbour with new moles providing the best protection from the Meltemi on the island. The mineral baths after which the port took its name, are unfortunately no longer in use. The mineral springs were already frequented in Roman times and can still be seen as (covered) streams that flow towards the port.

The anchorages in Stefanos Bay are also worth visiting.

The two charming inland villages, Chora (Kythnos town) and the lively little Dryopis, can best be visited by scooter or bike.

Kythnos is one the northern islands of Cyclades. It is also known as Thermia, because of the thermal springs of Loutra, unique in their kind in the Cyclades.

It's an island with many advantages for the vacationers.

Countless beaches, colorful villages, and, mainly, a stone's throw away from Athens.

Chora, the capital is picturesque and peaceful, but not near the sea, while Merichas is noisy being on the seaside. Both settlements are situated near the center of the island.

Churches, monasteries, museums, archaeological sites, and, of course, beautiful landscapes, are among the many things Kythnos can offer to its visitors. The church of Panagia (Virgin Mary) Canala, in the seaside village with same name, is an important place of pilgrimage, and is considered miraculous.

Colona, about three kilometers away from Chora, is one of the best beaches of the Aegean Sea. It's a long strip of sand connecting Kythnos with the isle of Agios Loukas. Other beautiful beaches are Gaidouromandra, ideal for diving and spear fishing, Martinakia, with sand and many salt cedars, Episkopi, near Merichas and Naoussa Beach.

Τhere's public transport connecting the main villages and beaches of Kythnos, but you may need rent a car or a bike.

You will find many workshops with fine traditional ceramics of Kythnos.

Kythnos Island is located west of Cyclades and is surrounded by the Aegean Sea and just an hour from Athens by boat. Blue water and clean yellow sand surround the entire island.

One immediately notices the happy and smiling faces of the people who live on the island all year long as they welcome you. Fresh fish from the Aegean Sea and local delicacies (cheese, goat, sausages, and wine) are waiting for all visitors to taste them. Picturesque villages hidden from the old day's of pirates are waiting to be explored.

Kythnos is a beautiful mountainous island located in the western part of the Cyclades. The wild beauty, the picturesque architecture and the lovely beaches attract many visitors, particularly Athenians in summer weekends. Chora and Driopida are the most traditional villages in Kythnos island with stone houses and paved streets, while Loutra and Merihas have many tourist facilities. Kolona is the most beautiful beach on the island, with soft sand and crystal water. The rest of the beaches on Kythnos Greece are secluded and ideal for relaxation. The island can be combined for holidays with other islands of Cyclades, such as Kea, Serifos and Sifnos.

Low-key Kythnos is a series of rolling hills punctuated by stone huts and bisected by ancient walls, green valleys and some wonderful beaches. Port life in Merihas and village life in beautiful Hora and Dryopida remain easygoing, and foreign tourists are few, although the ease of access from Athens sees locals filling the island’s beaches and marinas on summer weekends.

Excellent location with great view. M4 Kythnos properties are well designed. Fully functional for a family, with all the necessary amenities to really enjoy your stay. This is the best choice to enjoy Kythnos island.

Villa with a unique view, very close to the sea and to the village of Kanala (both within walking distance), spacious, functional, quiet and aesthetically impeccable with a minimal and modern furniture and some luxury finishing. Nikos, the guy who handled our booking and stay, has been very helpful and full of useful advice (the tip on the leeward beaches proved to be a winner), the cleaning and the tidy up of the rooms every two days have helped a lot. We stayed in 8 (4 adults and 4 children) and each of us immediately has found their own dimension and their own spaces to relax, have fun and enjoy a holiday that, according to the whole group (kids and parents) has been undoubtedly unforgettable .

This was one of my most enjoyable staysbin Greece. Starting with Nikos’ hospitality to the excellent house condition and location (you need to rent a car though to move around the island) to the amazing beach and view. Nikos also gave us great tips on what to do and where to eat. I can’t wait to go back. The only thing to bear in mind is that the house has some stairs and is multi-leveled so if you have a toddler, you need to really be careful.

Kastellas is a serene, secluded beach at the South-west side of Kythnos next to the Flabouria seaside settlement.The ancient remnants of the little castle that used to be on the top of the hill adds a sacred sense in the wilderness of the surroundings. On your way to Kastellas beach there's a small part of the road which isn't covered in asphalt. Slow down your engines and drive on. The moment you set your foot onto its ground the experience will compensate you.