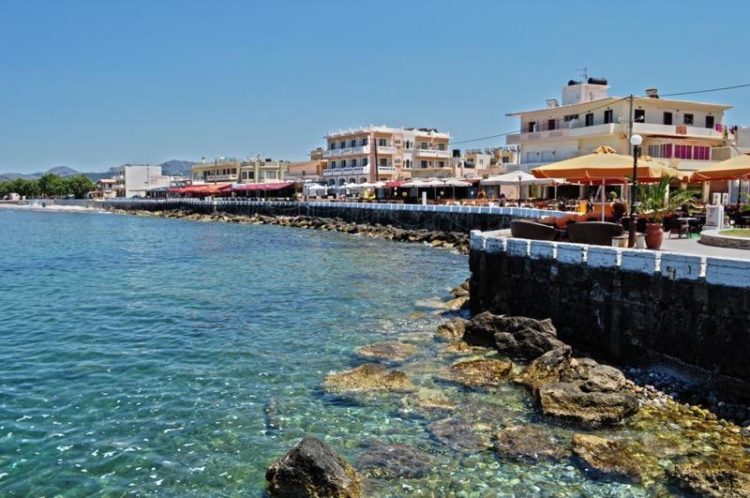 I like Kissamos: it's a nice, ordinary, working Greek town, but it's not somewhere most people would want to spend a holiday. If it's a beach holiday you're looking for, there are several good resorts with good accommodation on the coast west of Chania; if you want to stay in a town, Chania would be a much better choice.

But bear in mind that August is a very hot month, and neither town would be as comfortable as a resort hotel on a beach.

Crete is really very beautiful, we visited Rodes, Cypres and Crete, so Crete is awsome. Kissamos is a small lovely town for a shot stay. We did, as wanted to visit Elafonisi, which is not far from there. All Greek people we met were extremely polite and pleasant. BUT : we rent a car from the comany "Rent a car Kissamos" last August and were so much dissapointed by dishonest behavior of the lady working there.This spoiled our vacation so much. And the lady (short hair) was an extremely unpleasant and fraud , to my mind. So, I want to warn all tourists - be careful, or even better do not take cars from them.

We visited many countries, rented a lot of cars everywhere, but this company......:( NEVER AGAIN any bussiness with "Rent a car Kissamos". Avoid this company.

Not sure about Kissamos nightlife, But I can tell you that taxi from Kissamos to Chania, esp. at night would be very expensive. My guess is around 30-40 EUR.

Kissamos is very far away from downtown and beach.

The archeological museum of Kissamos, situated in the central square Stratigou Tzanakaki, is a recently renovated listed building housing a treasure trove of local archeological finds from the Hellenistic and Roman periods – most notably very impressive mosaics. There is also a delightful street called Skalidi that runs through the centre of the old section of the town with traditional arched buildings and small local tradesmen and shops.

One and a half kilometers from the centre of town is the picturesque fishing port with two tavernas and a little further on the larger commercial port that links Kissamos by a ferry service to Kythera , the Peloponnese and Piraeus. From this port there is also a daily pleasure cruise to the stunning island of Gramvousa and lagoon of Balos. Between the two ports is the surprising little 10th century church (reconstructed in 1947) St. John Damiali built into the rockface and opposite a tunnel leading to Damiali beach – a pebbly cove with crystal clear water that will enchant you.

Kissamos or Kastelli is ideal for people who want to explore West Crete while staying in a comfortable, organised place, with cheaper accommodation and food than other, more touristy parts of Chania Prefecture.

Kastelli is ideal for family holidays, or for people who want peace and quiet without privations.

Holidays in Kissamos are ideal for nature-lovers who want to be close to gorges, ecological nature walks, and the beautiful beaches of Elafonissi, Falassarna and Balos (Gramvoussa).

Kisamos is the nearest town to the three of the best beaches on the island of Crete. These are...

Of course, you can visit these beaches wherever you choose to stay in Chania.

However, by choosing to stay in Kissamos, you will have the chance to spend more than one day of your holiday's time, on these beaches.

Kastelli Kissamos is found 42 kilometres west of Chania and is the largest town of the province of Kissamos with around 5,000 inhabitants.

The resort has a long seafront overlooking Kissamos Bay, formed by the peninsulas of Gramvousa and Rodopou, with rocks to the east and a small sandy beach to the west.

At the village centre are two squares - Kastelis and Venizelis. Kastelis is the main bus terminus and this area of town has the most facilities.

Kastelli Kissamos was much more important in ancient times, being the seat of an important city state - Polyrinia - which minted its own coins. Inland are the ruins of an acropolis, theatre and aqueduct.

The Venetians built old city walls that are still standing as does a Venetian fortress which gives Kissamos the added name of Kasteli.

The modern resort has a scruffy beach of sand and pebble but the surrounding countryside is very attractive and this is a big region for olive oil and wine production.

The Kissamos region has some of the best beaches on Crete and many are within easy striking distance so this is a good base to explore the western coast.

There is a regular bus service to Chania and ferries to the mainland Peloponnese and to Kythira. The E4 European Walking Path starts its Cretan leg here, winding over the mountain trails for 320km across Crete and taking in some spectacular scenery on the way.

Kissamos is the best place. The town itself if ugly, but it's a strategic point to Balos, Falasarna and Elafonissi. You can also go to Chania, in the evening in 40min of drive.

If you want to stay to Chania and still visit those beaches you still need to pass from Kissamos, so it's up to you. The westernmost part of Kissamos has lovely beach and sea, almost deserted and never crowded. Otherwise you can choose Resorts near Chania (or somewhere else) where umbrellas are placed 1,5-2m from each other.

Kissamos is great for beaches and yes it IS a port but still has some nice bars etc. Sara hasn't replied to any posts - but then again i note she is from Cairo. She's probably got more on her plate right now. Any place out of there would be good - beaches or not....

Kissamos exudes an unpolished, almost gritty, air compared to other north-coast towns. This is not a place given entirely over to tourism. There are two beaches in town, separated by a waterfront promenade: the sandy Mavros Molos in the west and the pebbly Telonio beach to the east.

I must say that I love this small town next to Chania city on Crete Island. It is located on West coast, which doesn't have many beaches. The place is quiet without crowds and too many children. However if you would like to go out for clubbing night, you can always go to Chania which is about 15-20 minutes driving by taxi. During the day you can take a bus (30 minutes), which is cheap and runs pretty often. I can definetely recommend small tavern (wooden small building) just next to the Afrodite Hotel. The food is typical greek and it is fantastic. the town is small but you will find all facilities like car rent, motorbike rent, supermarket and small restaurants. During the evenings you can go to beach and just listen the sea. From there you can visit all Western and South-West part of Crete which is more wild than the middle. Take a motorbike instead of car because air in the mountains (which you need to cross to go to the south part) is amazing

Kissamos is a small town surrounded by beautiful landscape with an attractive little harbour,lots of shops,cafeteria and tavernas mostly along the seafront,a long history and a lively atmosphere.It is a busy place,offering everything tourists may need,although it does not seem very impressive at first.On first arriving at Kissamos,you see the large beach of grey sand stretching out in front of the town and the rocky coast to the west.Kissamos is built along a wonderful sandy beach.It is located where the ancient city of Kissamos stood.With Kissamos as a starting point you can visit the archaeological sites of Falassarna and Polyrinia,the Gramvoussa isles(pirate isles),the beautiful Georges of Topolia,Sirikari,the lagoon of Balos the medieval villages etc.The crystal clear sea and the vast sandy beaches of Kissamos make your holiday a unique pleasure.South of Kissamos,at a distance of 7 kms are the ruins of the ancient city of Polyrinia.Polyrinia is considered to be the oldest city that the Dorians built in Crete(following the Minoan Period).