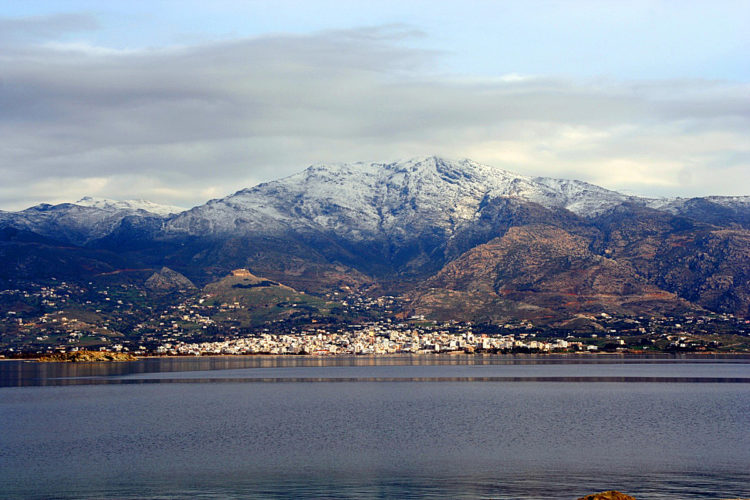 mysterious cave-like historical dwellings on top of a very high hill. We walked but you could simplify it by driving most of the way. Somewhat similar in appearance to Stonehenge. Teenagers might not enjoy them so families could explore the many churches dotted round the hills or the Castle Rosso to get a sense of history.

The beach of Karystos is the port city, where you can enjoy coffee or lunch overlooking the picturesque boats. But if you want to swim on the edge of the harbor beach is a beach bar (West Beach) where in and out of the sea there is sand. If you continue along the coast to the west you will find many more beaches deserted. For the more discerning, there is another beach of Karystos with beach bar (Eastern Beach) known as Fine Sand, which lies just beyond the port to anatolika.Stin coast and the bottom is sand. Also if you continue east you will find other beaches.

The irresistible combination of mountain and sea, its closeness to Attica and cosmopolitan character render Karystos an ideal destination for you to welcome the summer. This picturesque town, endowed by nature and history, offers an extremely wide variety of options. Its coastline boasts innumerable beaches alternating between calm sandy shores and wild rocky bays. If we add its history and legends, then you can be sure that your stay there will be amongst the most enjoyable and interesting holidays you have ever had. A stone’s throw away from Athens, you can easily get there by boarding the ferry boat from Rafina or Agia Marina to Marmari or Nea Styra in South Evia.

Great area to hike around, with lovely scenery. And you can end the day at the beach for a refreshing swin in the sea.

What an amazing place

Its quite a hike to get up to the Dragon House but well worth it. The house was amazing, and the 360 degrees views fabulous.

They have nothing to do with dragon houses as the word says, and I truly cannot understand why they carry this name.

The people who used to live in these houses used to be loggers working in quarries digging out the Karystian stone.

There is an Acropolis on the highest peak of Mount Ochi which is in this area and as poets write in books, the love of the god Zeus and Hera still hangs in the air!!

Three similar houses are located near Styra (a nearby coastal town). They are easily accessible and are alongside the road that goes from Marmari to Styra. There is also another one on the mainland on the west slopes of Hymettos, which is the simplest and crudest of them all.

The houses are really peculiar and they were explained by myths of the modern Greeks as “dragon houses” thinking that they belonged and had been constructed by some kind of giants or other supernatural creatures with enormous strength that was required to move the large and heavy stones for their construction. At first it was believed that they were dated back to the Neolithic period (7000 B.C) but recent study indicated that they may date to the Late Hellenistic or Greco-Roman period, about 146 B.C.

A paper published by Jean Carpenter and Dan Boyd (1977) American Journal of Archaeology) suggest that these houses were constructed by the Karians as place of worship.