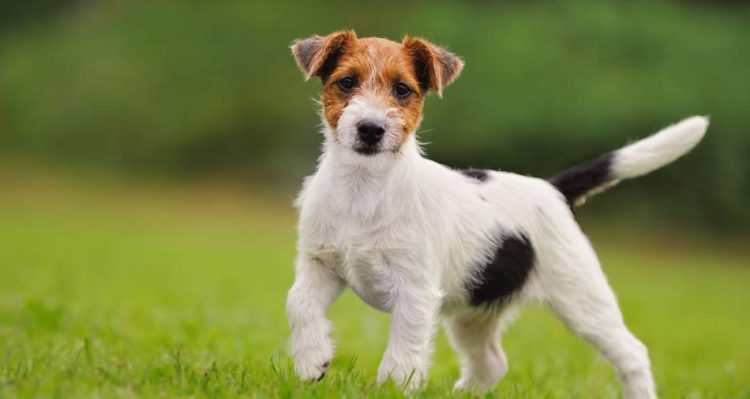 Oh god. Oh god. Oh God. Why? Jerk Russell Terrorist. That's what I call them. I have 2. I refused to use shock collars on dogs. I still do. But these are not dogs, they are demons forged in the depths of hell.

If you want a well trained jack russell you pretty much have to be training it full time. That means no job, no friends, no life, just dog training. And it doesn't end, they need constant reinforcement. They will fight other dogs, they will fight each other, they will demand attention, they will not listen. I can't for the life of me imagine why anyone except a really certain person would really want a jack russell.

That being said, they can be very affectionate. They need space, and having "a big den" is not jack russell space. And a garden? You are going to let your jack russell into the garden? Are you crazy? You won't have a garden, you will have a bunch of dirt holes and a constantly dirty dog.

I love my jacks, I have other dogs, but I love them like you love you children. You kinda have to, and you kinda hate them a lot, but every once in a while they do something and you remember that you really love them.

Their energy is unmatched, which is the issue with jacks. They don't have an off switch. I used to run my jack. I would run him. Then my ex would run him. Then he would want to run some more. Most dogs lay down an rest after having a big day, the jack would go around digging holes because he was mad he couldn't run anymore.

Seriously. Jack Russells are not for the weak. I grew up with dogs, dalmatians, standard poodles, pits, danes, and have always been around dogs. When I got the Jack Russells I almost went insane. I got joy out of shocking them. I've never felt that way before.

We had our first smooth-coat JR, Zeke, for 15 years and four months, when he passed away. He was our dear boy and we scattered his ashes at his favorite camping spot near Winter Park, Colorado. He died on a Sunday and by Tuesday, I was on the phone with his breeder to find our next JR family member. Our “youngest son” is a rough coat JR from the same line as our first boy. Jax has been bringing joy to us for three years now. We love JRs, but you REALLY need to know what you’re getting into with these little fireballs–please do your research before bringing one into your home–they are such wonderful dogs for the right family and they do not deserve to end up at a rescue.

My Jack Russell has a real problem Bi polar . I love him but do not trust him due to his behaviour. he has bitten me and my daughter a few times. I got him second paw ??? He is a Jack Rascal. I feed him well, take him walkies, he will fight with with most dogs, not very social – always on the leash. Will not let me put a coat on him in the winter time or a harness. Growls

I have had my Russell Terrier, Lucy for 4 years as she is aged 10-11 years. Love her dearly for better or worse, but she is indeed a dog who belongs in a high energy household. Dogs fit best with the right owner, so folks should read first before picking out a dog just because they looked good in a commercial. I am indeed fit to keep up with a Russell Terrier and I would recommend folks thoroughly research before picking one of these balls of energy. If you can keep up, they make life memorable!

Many Jack Russell Terriers are clever escape artists who will go over or under fences in search of adventure. You may need higher fences than you might imagine for their small size. They can climb chain link. You may also need to sink wire into the ground along the fence line to thwart digging. Gates should have the highest quality locks, as some of these dogs can open flimsy latches.

Though much more amenable to training than other terriers, Jack Russells must be taught at an early age that they are not the rulers of the world. The toughness that makes them suited to killing vermin can frustrate you when you try to teach them anything. Many Jack Russell Terriers love learning tricks, but less so the "No" command. Some Jack Russells are stubborn and bossy and you must show them, through absolute consistency, that you mean what you say. Read more about Jack Russell Terrier Training.

The Jack Russell Terrier has a lively, cheerful temperament, with a strong will. It is obedient - if properly trained. It is also fearless - so much so that care must be taken around larger dogs, for the much smaller Jack Russell will not back down. This breed also has strong hunting instincts and should not be let loose around smaller animals. The Jack Russell is good with children - it enjoy games and playing with toys - but will not tolerate ill-treatment from anyone. They like to bark and they like to dig, and they can get bored and destructive if they are not kept well exercised. The Jack Russell is also a climber and a jumper - so five foot fencers present no obstacle to them.

If you're having problems training your dog or getting control, you should read our review of DogProblems.com. Adam will do whatever it takes to help you whip your dog into shape. I've used them to help with my Great Dane as well as help friends train their dogs. It's the first place I go to help answer users Questions. Many training issues are too extensive to answer in this forum, which is why I refer a lot of the load to his site.

Update: I've been using and recommending DogProblems for three years now. I, as well as my users, value the techniques we've learned. I get weekly emails from users who have become better owners from the information they received.

Jack Russells are not easy dogs. Even by age 2, many still behave like full-on puppies: jumping, chewing, barking crazily! Honestly, what you've said about your family's hound could easily be JRT lite. That means you might essentially have a poorly behaved, hyperactive puppy at the same time as a newborn - is that something you're okay with?

If you are set on a Jack, exercise exercise exercise. These dogs need a lot of both mental and physical exercise. You'll definitely want to join a puppy class, and I'd suggest continuing with the next level of obedience classes and then doing agility/flyball/dog sport. If you're not already a big exerciser, dog sports can be an effective way to provide mental and physical stimulation, as well as connect with more experienced owners.

Finally, if your partner doesn't know anything about dogs, it is crucial that he learns BEFORE the puppy comes home. Watch Zak George or Sophia Yin youtube videos, get a few books. Discuss and WRITE DOWN the dog's future routine (although you'll probably be taking him out as often as possible during early house training, choose a specific time for feeding, longer exercise and bedtime). Decide how you'll be handling discipline (ideally positive reinforcement), because you need to be completely consistant.

Especially since you want a baby, you need to make sure your partner can handle a challenging dog as a first-timer. What if you have horrendous morning sickness, or you decide to breastfeed and are too exhausted from waking up every 3 hours to handle dog care? Your partner needs to be capable of doing the majority of the dog raising.

With all that said, I love terriers and if you have the right personality, this could be a great (if tough) time! Good luck, and please don't hesitate to ask this group if you have questions or struggles: we are rooting for you!

The Jack Russell is a hardy breed with few health and genetic problems.

Some are prone to dislocation of the kneecaps, inherited eye diseases, deafness and Legg Perthes—a disease of the hip joints of small dog breeds.

Most other health issues relate to injuries caused by the dog’s fearless and spirited nature. This is a strong, healthy breed with an expected long lifespan, about 14-15 years.

I got my first Jack Russell when I was just 3 years old & I grew up with him, he lasted until I was 22 & he was legit my best friend.

My family then got another one a couple of months later and he turns 6 this year!

They really are the best dogs, they are super active and love adventure. Both of mine have been trained from a young age and are super smart!

I wouldn't think about ever getting another breed of dog, I may be bias but Jack Russell's are THE BEST!

I have two Jack Russells. One is very smart,and the other one.. not so much :l.

I love my Jack Russell terrier, Barney, so much. A lot of this rings true for Barney, except being energetic. Barney is very lazy. I think this may be due to the fact that his first owner was an elderly man. Barney is probably the laziest Jack Russell ever. While he loves a good walk (he can only run for a short amount of time now that he is 14) he is happy to spend all day on the couch sleeping. My husband and I estimate that he spends 20 hours a day sleeping! He also snores which is adorable.

Barney is a people dog, he loves to snuggle and sleeps with me every night. He is interested in dogs but HATES cats. He often tries to attack small dogs and cats. He’ll even try to take on my parents’ dog, a 140 lb Great Dane! Be warned about Jack Russells though, they are hunters. Sadly, about a week ago 2 stray kittens got in our yard and I found them dead…,pretty sure it was Barney.

Jack Russell terriers are super smart. Barney let’s you know when he is mad. One night my husband kicked Barney out of the bedroom. How did Barney express his anger? He peed on my husband’s spot on the couch .

Also, Jack Russell’s do have eye conditions. I got Barney when he was about 11 and he had terribly cloudy eyes that we thought were cataracts. Long story short, he got an eye infection and I ended up having to take him to an ophthalmologist who diagnosed him with corneal epithelial degeneration which can be medically managed.

Overall, I love my JRT Barney SO much!!!! He is the cutest, most loving, stubborn, full of personality dog I have ever had!

The Jack Russell Terrier is a happy, energetic dog with a strong desire to work. This breed is most happy when given companionship and a job to do. Digging is normal for a Jack Russell, especially if he decides it is his job to free your yard from rodents! Hunting ability is bred into them; it is their nature. The desire to hunt combined with a high energy level makes training a must for the Jack Russell. You will never win a battle of wills with him!