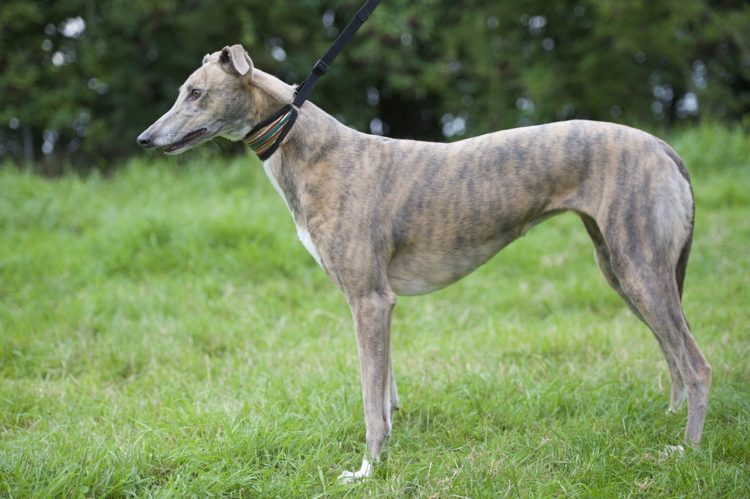 I'm not sure about a greyhound puppy, but I can give info on my retired racer. My boy sheds a ton. My clothes and car is covered in dog hair, though not nearly as bad as my lab. Greyhounds are prone to osteosarcoma and bowel problems. When I first got my boy, he had awful bowel problems and got diagnosed with colitis and irritable bowel syndrome. He needs to be on an expensive prescription diet now. He also needs daily exercise even though he sleeps most of the day. We take him on a an afternoon walk and then take him to run laps in fenced-in pasture every evening. I live out in the country with a lot of land so I'm not sure if a grey puppy would be for you since I heard they are very high energ

Jup. First dog, greyhound. They are very easy, but there are, as always, things to consider.

An ex racer might be very used to being handled buy might also have been treated badly. They might not been socialised too much to everyday life.

They might have a very strong hunting instinct, meaning that trusting them off lead might be a long work in progress.

They can have bad teeth depending on where you live and how racing is conducted there.

They are normally very easy going. Rearly pull on the lead, sleeps or roaches around for most of the day, don't get into fights and are generally a healthy breed.

They can be sensitive and can take a while and a kind hand and owner to break throuh their shell.

They don't really bark (ever) in my experience, except for on the track.

They can be Nuts as puppies, and a handfull, but calms down a great deal after a couple of years.

Cons: Can have a very strong hunting instinct, bad teeth, some get "corn" which is hard small callouses or something like that in the paws which can be hurtful to them. They can kill cats, because they are fast enough to catch them and they are a slaying breed. (Most wont).

I think it is a great first (and only breed for life) dog.

I've said this elsewhere: Greyhounds are not turnkey pets. When you adopt one, whether it comes from a foster home or not, you must have the patience and kindness to transition this dog into home life and being a pet. You may have to teach it a lot or very little.

Greyhounds need patience. The new world is a big, scary place; this is the not the track they've known.

Read Kathleen Gilley's Thoughts of a Greyhound and talk to your adoption group.

Most of the info on greyhounds as pets is based on retired hounds. Puppies are much different than trained athletes. They are rambunctious, and from what I hear from experienced greyhound breeders...holy terrors.

The strict training regimen given to racers definitely affects the final result. If it's not a retired racer there are few "givens". Genetic problems ate less likely with racers because of the detailed records needed, and the monitoring of breeding. Once you get away from there all bets are off.

I have a retired greyhound and two mixed breed dogs. It does sound like most low-energy breeds and calm adult dogs would do well.

Some groups cat-test their greys and I'd definitely recommend finding one that is considered "cat-safe" and I'm glad you have the rat and reptiles in a secured separate space.

If the apartment has lots of stairs to it be prepared to train a greyhound that stairs are not that scary and that yes they are capable of going up them. Mine had separation anxiety (getting a 2nd dog cured this) and resource guarding of his sleeping space that we've worked a lot on, and he is always trying to "counter-surf" to steal food. But not all greys have those issues. And he has responded to training for those issues.

Grooming a greyhounds is a snap, brushing with a rubber curry-style or zoom groom brush gets all the shedding fur off easily. I don't give mine baths but I use a washcloth with warm water to wipe him down as needed. I do take him in to have his nails done- I have trouble clipping his dark hard nails.

I wouldn't consider a greyhound to be any sort of a good guard dog, but they are pretty big. Mine has made me feel safer walking him at night just for that reason.

Greyhounds sound like a great fit, but so does any calm adult dog. It seems like you've given this a lot of though which is great! Update us when you do get your dog!

If you think you'll be happy with a retired greyhound do it. You're really helping an animal who needs it. Just know that some of them come with baggage and they can be less social than other dogs.

They are very low maintenance dogs, very easy going. I've found that they have very different personalities! For instance, some have commented that greyhounds never bark but my girl barks all the time - whenever she's hungry, wants a walk, needs to pee, or when playing. She's a diva!

They don't need much exercise, are easily house trained and don't require much grooming. They might need encouragement to play (some won't play, ever!) and they may need a lot of patience to settle down. My girl still cries for no reason somedays and we have had her for three years.

They are wonderful dogs though and would be great for a first dog!

Mine is the first dog I've ever been fully responsible for (had a family dog when I was in high school). It's been a fantastic experience, and I highly recommend it.

The only thing I'd add to what others are saying is that a good adoption agency can typically match a good hound to you: one that is easy-going, friendly, happy, etc. All greys have their quirks, but I doubt that they would pair you with a hound that is highly nervous or higher maintenance otherwise.

My greyhounds spoiled me.

I got two rescues as a teenager and when I moved out as an adult and was around other dogs, they seemed annoying. I was used to having dogs that were intelligent, affectionate, and really quiet. A lot of the dogs that people have are usually noisy, which I didn't like.

So yes, would definitely recommend.

Like others said, they really just wanna sleep/hang out with you all day. My girl sits next to me on the couch and puts her head on my lap for ear pets, and that is her happiest.

Mine is very quiet. She has been with us almost 3 years, and has barked maybe 15 times. They do occasionally "roo" which is kinda howl-like.

Great with my daughter. She loves to play with my 8 yr old and snuggles with her as well.

Like others have said, be patient with them. Right off the track, my girl didn't know how to walk up/down stairs, and had no idea what windows were, so she'd smack her head a lot. That only took a month-ish to get use to.

My only cons: Thin skinned. Get ready to play "where did that blood spot on the couch come from?"

They are bigger dogs, so I've had guests who don't know how sweet she really is be wary of her. Which can also be good when a stranger knocks on the door and you answer it holding on to a large dog.

All in all, love mine so much, she is my perfect dog.

Greyhounds were my first and only dog. I love them. Things to consider: You can't ever let them run off the leash unless there's a fence. They really like to get out and stretch their legs so if you don't have a yard it would be nice to talk the grey on a daily walk. Sometimes they're not good at stairs. Most young adopted greyhounds have a very high prey drive. My first greyhound killed several feral cats and attacked a puppy. (But she's well trained now and gets along with every animal beautifully--it was just a learning process for me)

But the upside is that they are very chill dogs. They'll just lay around mostly and mine never bark. A young grey will get up and tear their toys to shreds and then sleep for hours until it's time to eat or go out. An old grey just sleeps and sleeps and sleeps unless there's food around. I hope you get one and that it works out. Just remember not to let them run off the leash in the open.... you'll never catch up and their predator instinct kicks in when they're on the loose.

I dated a girl who had one and they lived in a 120 sq ft studio apartment and it was fine. Asleep for much of the day, I heard the dog bark twice in a year and a half- didn't want to be mounted. Lovely animal- she was calm, gentle, aloof to many but could be affectionate in her own way after a while.

Some things to think about. This dog was a seventy pound female- high end of the curve, but they're all pretty large. It's a good amount of food each month. Some of these dogs have high prey drives, and some rescue organizations will make you pledge never to take them off-leash in an unsecured place. They can be willful sometimes, but we trained ours to recall pretty well. Greyhound are also generally healthy and long-lived for large dogs (Great Danes might average 8 years, while greyhounds might average eleven). They do need help with dental care, though. Depending on the dog's dental status, it might be necessary to anesthetize them for their teeth cleaning, which can be $600+ depending on your vets. After a while she started to dislike the tile floor, but was fine with any other surface, and rugs helped a lot.

Loved that dog, and I'll be getting another when my schedule permits.