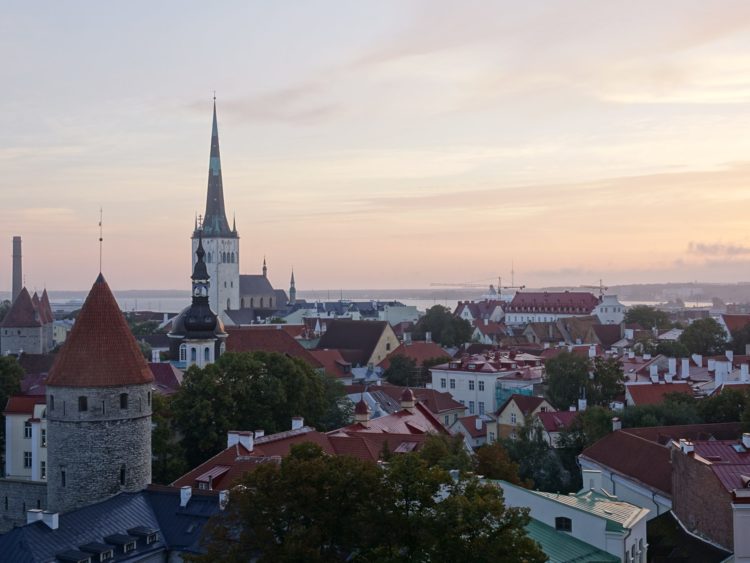 Estonia doesn’t have to struggle to find a point of difference: it’s completely unique. It shares a similar geography and history with Latvia and Lithuania, but culturally it’s distinct. Its closest ethnic and linguistic buddy is Finland, though 50 years of Soviet rule in Estonia have separated the two. For the last 300 years Estonia’s been linked to Russia, but the two states have as much in common as a barn swallow and a bear (their respective national symbols).

Combine your trip to Estonia with a tour of the Baltic states, arriving by car or on a coach. You can catch a coach to Estonian towns from as far as Warsaw, Prague and Berlin, serviced by Ecolines and Lux Express.

Small in size but big in character, the proud nation of Estonia manages to pack historical cities, swathes of charming countryside, a picturesque coastline, and rugged islands into a relatively small amount of space. Thanks to its compactness, visitors can easily travel between the many tourist attractions the country has to offer. Although just a stone's throw away from Finland, Latvia, and Russia, Estonia boasts its own distinct culture, evident in the country's cuisine, music, and traditions. This vibrant nation emerged from over 40 years of Soviet rule to be one of the most economically successful of the European Union's eastern members and is leading the way in tech industries. Estonia is in Europe.

Estonian / U.S. dual citizen here - on a side note, I have a few recommendations as well:

1. Don't expect EVERYONE to speak English, though many can. I have family in Tartu, for example, and one of my cousins there speaks English quite well, while the other one barely speaks English at ALL (she is in her late 50's). The younger generation are highly likely to speak at least some, as most Estonians are multi-lingual, but some of the older people - especially in more remote little towns - may not. Not that it's hard to find someone who can speak it in most places - but not EVERYONE will, and in my experience the Russian population is even less likely to speak English fluently.

2. Don't just hang around the old town area. It is, as he says, very touristy and not at all representative of what life in the rest of Estonia is like. Or even the rest of Tallinn. A lot of things there are for show - you'll find that elsewhere in Tallinn the city is much more modern and has a different feel.

3. Generally stay away from bringing up the Soviet occupation with people if you don't understand the situation - you might irritate some people who don't even like Estonia to be called a "former Soviet nation" - to them, it was illegally occupied for 50 years, and that is that.

4. While you CAN get by with English in most places, it's still a good idea to at least learn SOMETHING in Estonian. Tere (hello), aitäh (thank you), even that will be appreciated by some people a lot more than just running around saying "Hey do you speak ENglish?" - nobody expects you to speak it fluently, but if you at least try you'll already be one step ahead of some of the Russian speakers who refuse to learn it at all. Learn to roll your r's and you'll sound even more authentic.

5. BIG one: Estonians are not the most open and chatty people you will meet. Not by a long shot. In fact, they are notoriously introverted. In the United States, where I live, it is very common for people to nod to people on the street they don't even know and say "hey, how's it going?" or "nice day" - or to start a quick little conversation in the elevator with a stranger, or with someone in line at the grocery store. I always found this really weird, growing up surrounded by my Estonian-born family - for us, we were always really not very comfortable with this practice, and found it odd. BUT just because Estonians are going to smile at you and say hi, how's it going, or open the door and hold it for you or thank you for holding the door open for them in some cases...don't think that this means they are cold and unkind people who are indifferent to your existence. It's just the culture there to keep to yourself, and don't start a conversation with a stranger unless you have a REASON to. If you go up to someone to say hi...they might expect you to have some point to coming to say hi - like.."do you know how to get to the bus stop" or something - but if it's just "hi" to say "hi"...it might not get you the expected reaction.

I mention this one because this was a big point of contention when I took my wife, who is from China, to Estonia: her perception of this behavior was that Estonians are cold people who don't care whether you exist or not. To me, it just felt really familiar - because that's what my family was like growing up. It shouldn't be taken that way - so don't take it the wrong way. They're just really introverted ;)

I would not recommend speaking Russian in Estonia because often people take offense in that and besides most of the younger generation doesn't even speak Russian at all aside from the ethnic Russians of course. You are better off speaking English. If you want to test your skills in Russian i would recommend going to countries like Belarus, Ukraine etc. even in Latvia Russian is more common than in Estonia..

1. It is very safe. Crime here has only decreased year after year, and at this point I think public safety is easily on par with Western Europe, if not safer. You will be absolutely fine, day or night -- unless perhaps when completely disregarding common sense.

2. There is zero imminent threat from Russia. If there were, you'd know it. Sure, we're very aware that Putin would like to put Soviet Union back together given a chance, but unlike Ukraine or Georgia, Estonia is a member of EU and NATO. Russia is as likely to attack us as they would Norway, Finland or any other European country. Theoretically there is a chance, esp. if the current US administration keeps wrecking NATO and western cooperation in general, but right now it's unthinkable. Russia would have nothing to gain and everything to lose. While we have no illusions about their ambitions, nobody is worried in short term.

3. The most spoken language is English, which will serve you just fine. Most of the people speak English, almost everybody in the younger generation. You could use Russian with native Russian-speakers, but most Estonians would prefer speaking English.

4. Russia has much more buerocracy and stringent visa requirements, so visiting that place is a far bigger ordeal. Both of these cities are also too far, and too big for a day trip. You'd need to really plan for a proper trip to visit Russia, it's not day-trippable. You could drop by Helsinki, there are huge ferries carrying people between the cities every hour or so; it's a popular choice for a day trip.

5. There's absolutely everything you might want. Internet access in particular is probably better and cheaper than what you've used to in the United States. It's a more conservative country than Western Europe -- maybe comparable to American Midwest, though I can't honestly make a comparison.

6. No, the Estonian government has held a conservative line with refugees, and while it does accept the quota assigned to the country by the EU, our country doesn't offer nearly the same welfare, and is thus an unattractive place for refugees. Most of those who do get assigned here, simply escape to Germany or Sweden. I believe there are only a few hundred refugees actually staying in country right now, and the refugee centers are somewhere in rural areas, not in Tallinn besides.

Have no fear about visiting Estonia as a single woman! I spent 3 weeks in the Baltics a few years ago (on my own, independently) and can confirm what the posts above say. Estonia is vibrant, modern, safe and a joy to visit - you will be enchanted by Tallinn's old town. You will easily get by with English, but locals always appreciate it if you can at least say a few words in Estonian (hello, goodbye, thank you, etc).

Estonia is one of the most magical places you probably didn’t know existed. Located in northeastern Europe along the Baltic Sea, this small, forested nation could pass as the setting for a modern woodland fairy tale.

A crossroads between Scandinavia and Central Europe, Estonia is shaped by its eclectic past and inspired by the prospect of an ever-brighter future. Though its inviting capital, Tallinn, is an easy boat ride from Helsinki and Stockholm, the nation is quite different from its Scandinavian neighbors. Like its fellow Baltic countries, Estonia has an endearing enthusiasm for the things that make it unique — proving that you don't have to be big to have a clear cultural identity.

Еstonia is one of those countries that is often missed on European travel itineraries. Dwarfed next to its giant Russian neighbor to the east, and forgotten next to its more well-known Finnish counterpart to the north, Estonia tourism has often been overlooked. But those that venture off the usual tourist trail have an incredible reward waiting for them when they arrive in Estonia. Aside from the historical wonders of the capital city Tallinn, Estonia is full of hidden attractions that warrant at least a week or two of exploring.

that is a beautiful place to visit 🙂

There were so many highlights during this excellent, massively varied trip that it is difficult to choose only one. The capital cities of Tallin, Riga and Vilnius were distinct and delightful; the trips to the countryside and the coast were fascinating; To mention only a few highlights, we would have to include the upper city in Tallin; the canal cruise and the Art Nouveau museum in Riga; the former Soviet Nuclear Missile site; the Trakai castle and the old town centre of Vilnius..

With captivating old towns and sparsely populated countryside, Estonia offers the best of urbanity and wilderness. Open-air cafes pop up beneath crumbling castles while the country's extensive forests provide the perfect place to lose yourself in nature. Despite 300 years under Russian rule, Estonia has maintained its own unique identity with a riveting history displayed in the Soviet architecture and even older medieval churches.

Visited Estonia this summer, amazing place. Tallinn is so cozy and sweet, not only the centre but even away from the touristy old town the old wooden houses surrounded by trees and quiet streets with trams and almost no cars, perfect. And people are so nice and good looking with their blond almost white hair. Aww. I just want to give this country a big warm hug.