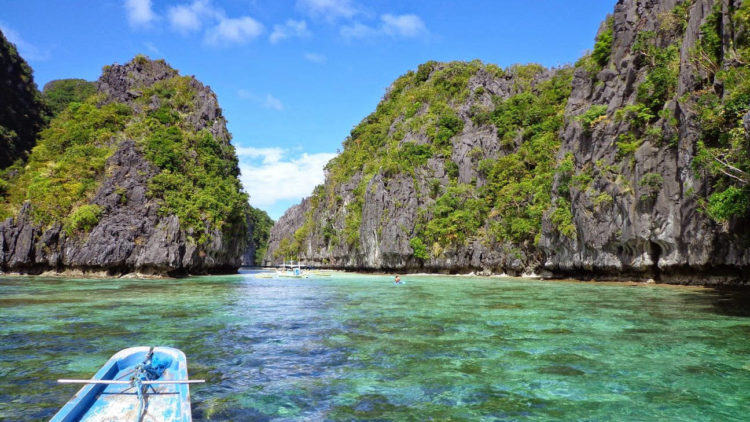 El Nido is paradise on earth. This cluster of islands is said to be the inspiration for many movies including “The Beach”. In my book, El Nido beats Fiji for having the prettiest water and beaches, it’s definitely one of the best places in the Philippines. The best parts of the area can only be reached via a booked day trip, and El Nido Tour A takes you to some of the most famous, and beautiful, parts of the archipelago. When looking for things to do in El Nido be sure to include the El Nido tour A!

After a short ride throughout the bay, our first stop on El Nido Tour A dropped us at Small Lagoon. It’s on the northern end of Miniloc Island and is an open top cathedral of limestone. Vertical walls of stone form a lagoon of shallow water in the shape of a nearly perfect circle. Staring up at the imposing walls from the inside, it starts to look like a very alien landscape.

El Nido is the most popular holiday destination in Palawan, the westernmost province in the Philippines. Occupying a land area of about 400 km2 at the northern tip of Palawan Island, El Nido is a first-class municipality that also comprises 45 islands and islets, all of them part of the Bacuit Archipelago. El Nido – The Nest - owes its name to the fact it’s an important turtles’ breeding area. Famous for its white sand beaches, turquoise waters, coral reefs, and splendid limestone rock formations similar to those of Ha Long Bay in Vietnam or Phang Nga Bay in Thailand, El Nido has managed to become one of the most popular resort town vacation destinations in the Philippines in the space of just a few years.

Despite its remote location, El Nido hosts a decent choice of pleasant night spots for you to party or relax after dark, whatever your mood. Not surprisingly, ultra-modern nightclubs pumping loud techno music are not (yet) part of the fun here, but, in town, New Zone Disco & Karaoke is the place you should head to if you like to dance. Whether you stay in town or at one of the beaches nearby, you’ll find a suitable spot to have a drink and socialise at night. From the Rasta Bar in town to La Plage at Corong Corong Beach or Republica Sunset Bar in Buena Suerte and many more besides, there’s a wide choice of venues to enjoy the nightlife in El Nido.

El Nido is the primary base for exploring Palawan’s star attraction, the stunning Bacuit Archipelago. Tiny swiftlets build edible nests out of saliva in the immense limestone cliffs that surround the ramshackle town proper – hence the name, El Nido (nest in Spanish). The town proper has an ordinary beach, but is home to an emerging restaurant and bar scene. Brooding Cadlao Island looms just offshore.

Bring light cotton clothing, and pack as light as you can if you're flying there, as Air Swift (which flies into the local airport) has a 12kg limit on baggage. Dress modestly while you're in town—Filipinos are still rather conservative in rural towns like El Nido, despite their constant contact with Westerners.

Located at the very north end of Palawan island, El Nido is quite a remote place (that’s also what makes it a charming place). Until a few years ago, accessing it used to be an adventure in itself, taking up to 24 hours from Puerto Princesa, Palawan’s main city, which is “only” 230 km away. Nowadays, this tropical paradise is much easier to reach… even though it still isn’t a total piece of cake.

Before planning your trip and choosing your island hopping tours in El Nido, the first thing you’ll need to know about it is how to actually get there! This is exactly what we’ll discuss here. We’ll see what are the most common and the most practical ways to get to El Nido, may it be by road, by air or by sea.

While you're in town, favor rubber flip-flops over shoes—the latter will just get in the way, as you'll mostly be on the beach or jumping on and off pump boats between islands.

Snorkeling gear, diving gear, windsurfing gear, and kayaks can be rented in town.

I've been on a yearly trip to El Nido since 3 years ago. My last one was last february where I stayed 7 days, my longest one yet. El Nido is my favorite place in the country, as a filipino where sights of secluded white beaches are normal, El Nido definitely stands out from the rest.

El Nido is no longer off the beaten track, that's for sure. But for experiences, it's still one of the must see's in the Philippines. It's a combination for adventure and socializing with other backpackers, and it's far different from the Party Island of Boracay. Easiest thing to do aside from the island hopping, rent a scooter, drive your way to nacpan, a long stretch of white beach with a less number of tourists. The only reggae bar is a blast, it's the only place to stay at past midnight so most of the travelers in town congregates here. I believe El Nido might be a good choice for celebrating new years, just a perfect balance I would say.

I guess you just have to see it yourself, if you feel like it's "too much touristy" for you, head out to Port barton like most people here suggests. It's definitely more peaceful there, but it lacks the "socializing" aspect. Also, Kayaking to islands is a good option too, then either you camp by yourself or get a group and organize your own camping trip for a cheaper price.

Regarding the money, it's definitely not the cheapest place in the Philippines to travel. However, there's a lot of options for everybody, hostel's are already growing in the the town itself, a camping type hostel is also available in Nacpan beach. The restaurants mostly cater to foreigners so the food are a bit on the up scale comparing, but then again, cheap eats are everywhere.

For flights and traveling inter-island, since you'll only have a couple of days to travel, I strongly suggest to take the flight, and buy it now. It's only going to get more expensive in the upcoming weeks since a lot of filipinos are on holiday during those time. Long ferry trips isn't reliable at this time too.

I guess that's it for now.

Yes! I was there like 3 years ago and it was so much fun. Great place to just relax on a nice beach, have drinks, good food. We didn't even have a place to sleep when we got there, we just kinda wandered around until we found a place we liked. Did some great snorkeling while we were there. We met lots of other people on the snorkeling trip and from just hanging out at the restaurants and bars that are literally on the beach all day.

I have friends that went to El Nido back in 2011. They told me you could never swim in the beach because the boats had nowhere else to dock to do their island hopping trips. I was there in 2013 and was there in January this year. Not much has changed from what I've seen, there may be a few more people but I wouldn't compare it to Boracay (we were in Boracay before going to El Nido). El Nido is still a lot more relaxed compared to Bora. There is a beach nearby (corong corong), only a km away. There's also Nacpan beach which is about a 30 min bike ride from El Nido. A lot of hidden beaches if you decide to ride around for the day. As for the prices of accommodation, not all the places can be found online. Prices can range from $10 USD to $100. Just get the tricycle driver to show you around. We were paying $10 a night. If you have a bit of cash, check out www.taophilippines.com it's a 5 day island hopping trip from El Nido to Coron or vice versa. The people that run it help out the community by giving them jobs and providing education to the locals in the islands. It's the ultimate island life and you'll see the most beautiful islands you'll ever see. I say give it a go and try it out for yourself. I've heard good things about Siquijor as well. That's next on the list when I go back to the Philippines. Heck why not go to both! Philippines won't be the same in 5-10 years time. More and more travellers are visiting, making it an alternative to Thailand/Indonesia. Now is the time to go.

El Nido Resorts is a group of sustainable island resorts in the El Nido and Taytay municipalities in Palawan, Philippines. The resorts offer genuine, local hospitality, and unique and enriching experiences amidst the beautiful natural landscapes.

In february i will go to El Nido again after 5 years. Great to see it still looks just as nice as 5 years ago. I will also go to Coron and Bohol. A month of scuba diving and relaxing :)

palawan is beautiful for me .Balabac. El l Nido , Coron and port Barton are the best in the world

El Nido Palawan Philippines has some of the most beautiful scenery we have ever encountered. This cluster of islands is off the tip of the Palawan Island is full of dramatic rock formations and surrounded by bright blue waters. There are a ton of things to do in El Nido so give yourself a week in El Nido if you can. The town itself has enough options for food and the basics for a week-long trip or so. Hotels range from gorgeous over the water beach huts, budget-friendly rooms, or you can even rent an entire beachfront home on Airbnb.

Me and my girlfriend enjoyed El Nido… Such a nice place..Peaceful, friendly, accommodating people….Tours was great fantastic view of lagoons though it was rainy that day but we enjoyed it….We also went to NACPAN beach and Kuyawyaw falls…We drove a scooter all over El Nido…It’s a MUST place to visit and spend some quality time with your love one’s…We’ll definitely going back to this place…Next stop, CORON…whhooaaahhh!!!…….