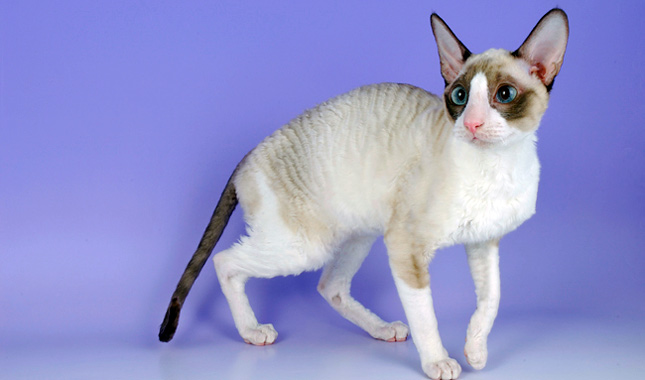 The Cornish Rex cat is a study in contrasts. Its fine, delicate-looking bones give the impression of a fragile animal, but the Cornish Rex is generally very playful and active, even behaving (and sometimes looking) more like a dog than a cat. Its whip-like tail and large, pointed ears have earned it comparisons to dog breeds like the whippet, and the Cornish Rex is happy to accommodate with its fondness for games like fetch and catch.

Even though the Cornish Rex looks like it might have been among the first domestic house cats, it's actually a relatively new breed. In 1950, a cream-colored male kitten was born to a barn cat in Cornwall, England. This kitten was not like its siblings, though, as its tightly curled hair and long, thin legs made it look more like a Rex rabbit, hence the name. Kallibunker, as he was called, became even more unique as the weeks passed and he developed his thin, whip-like tail, giant ears that appeared to have been stolen from a bat, and a narrow, egg-shaped head with high cheekbones and a slender nose.

True to their dog-like nature, Cornish Rexes are notoriously friendly and outgoing, even around strangers, making them excellent choices for families with young children or people who often have visitors over, as this intelligent, inquisitive cat is a natural entertainer and will be among the first to greet newcomers.

These are thinking cats with great appetites so do not allow food to lie around on open counters if you consider it valuable. Whether you have set out a steak to thaw or a fresh loaf of bread, a head of lettuce, carrots or even cantaloupe, they will become targets for these feline omnivores. Nothing is safe from their appetite and intelligence, so you better put your valuable food away or get it under glass.

Cornwall is a sort of magical corner of Great Britain. It was the birthplace of King Arthur, and it was the birthplace of one of the most unusual and interesting cat breeds in existence: the curly-coated Cornish Rex. A curly-coated kitten was born in 1950 to a shorthaired tortoiseshell and white pet cat named Serena, who belonged to Nina Ennismore and Winifred Macalister. The other four kittens in the litter had short hair, so Kallibunker, as he was named, stood out for his odd coat, the result of a spontaneous natural mutation. As is so often the case, the father of the litter was unidentified, although he was suspected to be Ginger, a shorthaired red tabby who was Serena’s litter brother.

The Cornish Rex appears suave and refined, but then this charming and highly intelligent cat’s sense of humor and love of attention take over and he strolls onto center stage, ready to play the piano, perform tricks, or amaze onlookers with his ability to vault to the highest point in the room. His long toes enable him to manipulate objects deftly and to open doors and cabinets with ease. Be sure you put away securely anything you don’t want him to have (and don’t let him see you doing it).

Grooming the Cornish Rex is typically as easy as brushing your hand over his coat. Some Cornish Rex cats have a longer or woollier coat, however, and may need some help from a soft bristle brush or fine-tooth comb to keep their coat looking neat. Groom gently so you don’t break the delicate hairs. The best thing about a Cornish Rex coat is that the hairs are so fine that they aren’t very noticeable on clothing and furniture.

I have a Cornish Rex, mind he's still a kitten. In general the breed is known for being high-energy cats that are active throughout their lives and want to be involved in what their owners are doing. Mine gets into, onto, and under everything. He's also very loud, but he sleeps through the night so long as I give him lots of attention when I'm home. A 9-5 isn't a problem really, but (s)he might get up to some shenanigans while you're gone if you don't have the right toys.

We have a 6mo Cornish Rex and a 3mo . We made the breed choice for their personality and their low-allergen ness. We found that, other than mild sniffles and blocked noses in the first week, we have had no allergy problems with our cornish rex. We got two so that they wouldn't get lonely while we are out at work, as they are our only pets. When we just had the one, she was content hanging out by herself while we were out and just extra thrilled and interactive when we got home. Other local devon and cornish rex owners we've talked to say that 1 alone would be ok.

They are known for being a vocal breed which we are handling by ignoring them during the 'bored' or 'feed me' or 'let me out now' repetitive meowing and then rewarding quietness with play and affection. At first we talked back which only increased the meowing.

We find ours to be very athletic and playful and cheeky and smart, with an affectionate personality. Ours sleep through the night under our covers but we usually tire them out with play right before bed. Hopefully they won't grow out of this and start bugging us while we're sleeping as we don't have a way to lock them out of the bedroom loft.

I have never lived with cats before, and was used to dogs. I find them much less needy than dogs but enjoy that they interact more affectionately than other cats I've known. I don't find it overbearing, ours are good at communicating what they want and will deliver the toy they want to play with in our laps and tap us if they want our attention. They also give us scathing looks if we use our phones while we're cuddling with them, but harsh judgement is as far as that goes.

I'm really happy with our Cornish Rexs, and I can understand why people say it is hard to go back to other cats once you've lived with one.

Hey there! I have a Cornish Rex. I've had cats before, and I find that my rex is slightly more affectionate than other cats I have lived with, but mostly more interactive. When I'm home, she is interacting directly with me around 70% of the time, whereas other cats seem to get on with their own business a lot of the time. She's also a lot noisier than any other cat I've lived with. I adore her though--she's fantastic. Everyone I know who has one loves them to pieces.

I saw a Devon Rex at a cat show, not a Cornish. But with the much shorter fur they're probably good for allergies. I'm allergic to cats. Suddenly came on when I was about 12/13 after having them since I was a baby. But I've got three bengals in the house. I wake up a bit sneezy, but no where near the reactions of my old cats. I believe it's due to bengals not having a sub layer of fur. But they have a certain temperament, it's like having toddlers in house constantly.

Your best bet (if you don't find anyone on here) is to check out the NZ cat fancy's show page, there's a show in the Hutt on sept 16th, or another on the 28/29th October.

The playful, affectionate Cornish Rex is a small to medium-size cat with an extraordinary appearance, from his egg-shaped head and curly whiskers to his short coat with bent hairs. The unusual wavy coat comes in many colors and patterns, including bicolor (one color and white) and tortoiseshell.

We recently adopted our beautiful Cornish Rex kitten, Sonia, from Tatyana, and we could not be happier! She is a rare treasure who has brought immeasurable joy to our household. Her loving, curious and playful personality makes her a wonderful daily companion. She longs to be close to us and pays great attention to my children. Her soft, wavy fur and lithe, graceful form make her a pleasure to observe in both rest and play. She arrived to us healthy and fully housebroken, and exhibits uncanny intelligence for such a tiny creature!

We are the happy parents of Rex Graceful Kleopatra, she is a sweetheart that sunshines our lives by its infinite kindness, its incredible sense of humor, a true remedy against depression! She is also a very affectionate and very sensitive pussy, very intelligent! The first time as I saw her, it was love at first sight. Thank you Tatyana for having entrusted her to us, thank you also for your availability, for having done everything in the rules of the art and to have so well organized the long journey up to us. Your website is very aesthetic and it is always a pleasure to admire your beautiful cats.