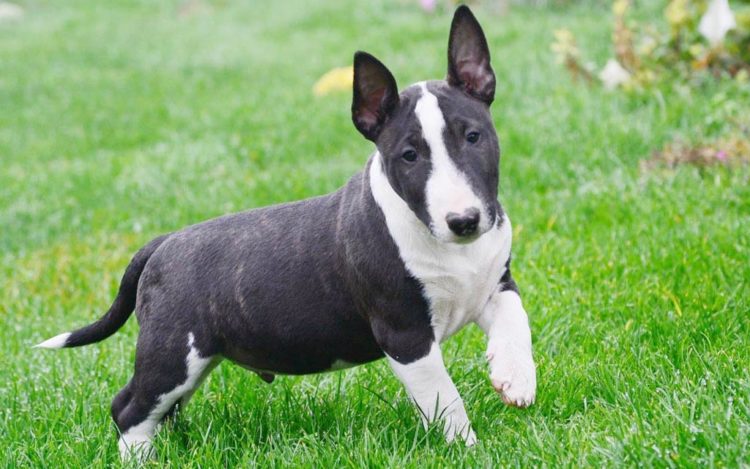 This muscular, forceful, vigorous dog does best with active families, for he has a high energy level that comes in spurts and bursts.

Bull Terriers have an independent mind of their own and are not pushovers to raise and train. They can be manipulative, and many are willful, obstinate, and dominant (they want to be the boss) and will make you prove that you can make them do things. You must show them, through absolute consistency, that you mean what you say.

Many Bull Terriers are friendly and love everyone, but some have protective instincts toward strangers. All Bull Terriers need extensive exposure to friendly people so they learn to recognize the normal behaviors of "good guys." Then they can recognize the difference when someone acts abnormally. Without careful socialization, they may be suspicious of everyone, which is very difficult to live with.

Once upon a time Bull Terriers were bred to fight. Crossing a terrier and a bulldog produced a breed with fearlessness, tenacity and strength that made them natural gladiators. The fighting branches of the Bull Terrier's family tree have since withered away, and the modern breed is a loving, loyal, clown of a dog who makes an excellent family companion for those with active lifestyles. They love being with people and want to be included in all family activities whether it's a ride in the car, a neighborhood stroll or a romp in the park.

Bullies are intelligent and have a mind of their own. Training should be started early and always done in calm-assertive manner, as they won't respond to discipline or harsh tones. Training is best done in short sessions due to Bull Terriers' short attention span and they will quickly become uninterested, even if treats are used as a reward. Lots of patience is necessary when working with a Bull Terrier, as training can be a long process.

Separation Anxiety develops often in Bull Terriers. It is important that this breed get enough exercise throughout the day and have enough activities to keep them busy when left alone, or they will become destructive. Some Bullies need to be crated well into adulthood to keep them (and the house furniture) safe when left alone.

The Bull Terrier was initially utilized as a gladiator and fighting dog, but since that time, the breed has become much gentler and more affectionate. If threatened, the Bull Terrier may react, but this breed is no longer used as a guard dog. They are courageous and feisty, but they aren’t aggressive towards people. They love affection and require a great deal of companionship and supervision. Bull Terriers are loyal and obedient, and they make excellent family pets if they are properly socialized and trained. While they love children, Bull Terriers may be too energetic for small children. Bull Terriers can be extremely aggressive towards other dogs, and they don’t live well with other pets.

I always found the Bull Terrier somewhat intimidating - maybe it's the appearance ... they always appeared "threatening" to me. Then i met one! My opinion was changed in an instant when walking home and one simply ran AT me and demanded that I play chase with her. Magnificent dogs.

Picked up my bull terrier pup 5 months ago.......two months ago found out he was totally deaf. Come to find out 20 percent of white bull terriers are deaf. We still love him but lots of extra work.

Bull Terriers are a fantastic breed... but they're not perfect and they're definitely not for everyone (definitely not a first dog dog). Most bullies have strong prey drive and can be dangerous to smaller pets (including toy dog breeds, fluffy rodents and cats). You can build a recall but it's always possible at any time that they'll decide to give you the proverbial finger and go their own way (keep them leashed or contained... and invisible fence is unlikely to work, they tend to have a very high pain threshold). They are EXUBERANT... and can knock down little people or love them to bruising so I'd not recommend them for families with small children. They're very solid dogs and even the small ones can pack a wallop when they run into you at 'ramming speed'. They also tend to eat things they shouldn't and that can result in expensive vet bills. They're not good fighters but seem to think they are... so they'll jump on the head of another dog and more often than not get beat up - but their aggression is usually triggered by things like food or toys (many of them are toy crazy) and can generally be managed. They're INCREDIBLY devoted and are very sensitive to punishment. We've had them for 20+ years and can't imagine life without them. While the owner in the video free feeds his... for the vast majority of bullies that's a recipe for a fat bullie (they love food, they also love sleeping). Many owners like their bullies fat because it slows them down... we keep ours trim because they're so much more fun when they're going like stink everywhere.

I too read bull terriers were energetic, then I got one. She is lazy as hell. I can barely get her to walk around the block. She gets hyper for about 10 minutes and then calms down. I've heard other people say this as well. I work all day and she is fine in the home with another dog, doesn't destroy anything. As a puppy, different story.

Can't speak for males, but my female is the most submissive dog I've ever had. Never snapped or bitten anyone or other dog.

I have a bull terrier/Great Dane mix. Probably the most awesome dog I have ever owned. BUT proper socialize, regular exercise and a clear sense of pack order is an absolute must for these dogs. At best, you are going to have a dog that completely destroys your stuff, at worst they have the capacity to kill someone. You need to be a very responsible dog owner when raising a bully breed.

Oh they are splendid dogs. especially with little kids because they are pretty insensitive and don't freak out when a tot tugs at their ears, tail or fur.

They can be intoloerant of other dogs but I have only heard good things about English Bull Terriers. I love their look too, so ugly they are pretty

I have a Staffordshire Bull Terrier and he is the greatest dog I've had thus far. The breed is one of three recommended for children by the AKC, they have the greatest personality.... He will actually "talk" to you. We've had children over to the house and the little boy would pu thim in a head lock for ages and the dog wouldn't mind at all. The little boy would push him around and he'd just fall over or attack him with licks. On the other hand they can be fairly aggressive with other dogs unless you raise them around/playing with lots of other dogs.

If a Bull Terrier is around children and other dogs from puppyhood they will learn to love and adapt to living with kids and other pets, The same goes for most other breeds including Boston Terriers. If you are considering a rescue keep in mind the bully may have been in a home with kids who took his/her food bowl away at chow time or may have been forced to sleep outside while a Boston slept indoors. In this instance the bully may not adjust as well.

I think bull terriers are beautiful dogs. They can be such clowns!