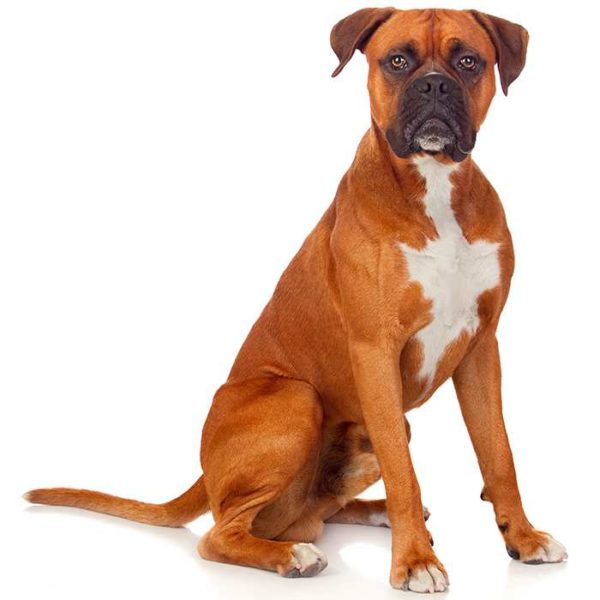 Boxers are such goofballs

Boxers can be fine family dogs if you can proviide enough exercise and training to control their rambunctiousness when young, and if you can provide for their special needs due to their unnaturally short face.

As puppies and young adults, Boxers are animated, playful (often cuckoo!) dogs who love to romp and jump. Middle-aged Boxers typically become more deliberate and dignified and make calm, loyal companions for the rest of their (unfortuntately not very long) lives.

Most Boxers, unfortunately, do not live a long life. This is partly due to unwise breeding practices such as inbreeding and linebreeding, which are more likely to pass along defective genes. It's also partly due to the deformities in their structure, especially their shortened face. An alarming number of Boxers die of cancer or heart disease in middle age. Other health concerns include eye diseases (such as corneal ulcers), digestive diseases (such as ulcerative colitis), hypothyroidism, itchy allergies, skin tumors, and more.

Boxers love kids and are great playmates for active older children. They can be too rambunctious for toddlers, however, and can accidentally knock them down in play. Always teach children how to approach and touch dogs, and always supervise any interactions between dogs and young children to prevent any biting or ear or tail pulling on the part of either party. Teach your child never to approach any dog while he's eating or sleeping or to try to take the dog's food away. No dog should ever be left unsupervised with a child. Boxers can get along well with other dogs and cats, especially if they're raised with them.

Ideally, the Boxer should be in a larger home with a big garden for them to run around in. However, providing you stay active with your Boxer, they will be happy living in a smaller living space.

As a Boxer matures, they will become much calmer. For this reason, adult Boxers make excellent watchdogs.

The Boxer is a medium-sized breed known for its compact face, pointed ears, and docked tail. This breed is a ball of energy, which is often channeled through agility, flyball, and obedience training. And sometimes, Boxers put their intelligence and patience to work, serving as guide or therapy dogs.

Boxer a little stubborn, understatement of the year 😂. They have very selective hearing.

I have had a couple of boxers in my life one thing I have noticed is they never really seem to grow up, always the puppy when it comes to playing.

I'm adopting a 9 year old boxer from a shelter soon! She's had a hard life (cancer, abuse, being used as a breeder in a puppy mill), but she's so sweet and kind, loves all people and dogs! Obviously she's an old girl so she's very calm, I think it will be a lot of cuddles, sleeping and chill walks.

I have a boxer smart enough to know what she isnt supposed to do but lacks the self control to not do it. Then she hides looking guilty as fuck completely giving herself away.

I miss my boxer. He was the dumbest goofball around but such a huge teddy bear.

Wow I don't get all the boxer-not-smart talk. Stubborn yes, destructive when puppies yes, but way smart imo. I dont think it's just mine. My boxer follows direction like a working dog. Intuition is off the charts. If someone knocks at the door I know by her reaction if it's someone I know or not. Her behavior around kids is not just loveable and goofy but protective and safe.

I protest... labradoodles have no idea what you are getting at when you hold a leash and say walk... chihuahuas get lost if you put them around a corner.... that's not boxer style

My other boxer was a saint. I could leave food out, take a shower and it would still be on the coffee table. This one is just dumb or something. I don't know. Maybe we've just gotten lazier and expect the same out of this one.

I put her on her back and wait for her to lick her lips, idiot jumps up and starts being an idiot again.

We have like 7 spray bottles. Stationed in every room. Idiot doesn't care. I put vinegar on all the furniture she's chewing. I think she actually likes vinegar.

I have no idea. I'm hoping she grows out of it at this point.

Boxers are big, sweet, cuddly loves, but they're not exactly known for their intellect. They're the linebackers of the dog world

Boxers are so funny! Best dog I ever had.