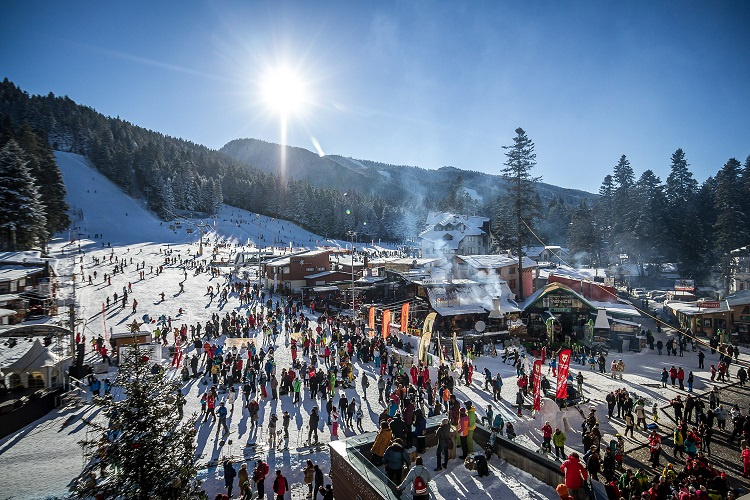 Value for money skiing in a beautiful place!

Bulgaria is a value for money option for cheaper skiing than the Alps and Borovets is a nice resort very close to Sofia (1 hour by car) which is a great option, easy and convenient. You can go there by taxi from Sofia (the ride costs around 40 euros each way) which saves you the hustle of changing buses at the neighboring village (Somokov) if you are you choose the cheap public transport option. The resort has two ski areas, the "down" which is the resort and they have artificial snow at the end of the season! These has a blue, red and black slopes. Its has some nice runs and the main pistes are lighted up in the evening as there is night skiing offered. This is a nice option if you are not skiing all day. If you do...then you are tired to do night skiing as well. Nevertheless is nice to have the option and its beautiful yo watch people skiing from the hotel in front of the pistes (Ice Angels) has the best location! There is a gondola that takes you up to the mountain where is the other ski area, a lot higher in altitude. I visited the place at the end of the season so mid week they didn't prepare the snow! They did prepare it over the weekend though and i was lucky enough that it snowed while i was there. There are some very nice long runs from the mountain with great views. All in all Borovets its not really the French Alps but its a nice value for money option for skiing if you have cheap flights. A week would be too long for me but 4-5 days is excellent. Maybe this is also linked to the slopes opened, as i visited at the end of March so a few slopes we closed. Of you are going end of the season, i would check which slopes are open....and don't really trust the snow height reported, it was supposed to have 80cm end of this March...but for sure it was not that much. Forgot to say that there are many places to rest equipment and book classes and they offer packages with ski pass, equipment and group lessons which are really value for money!

Bulgaria's longest-established and liveliest winter sports resort, set deep within an expansive mature pine forest in an area that was once royal hunting grounds reserved for the Bulgarian kings, now forming part of the largely unspoilt Rila National Park.

The resort's ski area is draped over the foothills and ridge-spine of Musala peak, the highest mountain in Bulgaria and the Balkans, in the eastern Rila Mountains just over 70km south of the Bulgarian capital Sofia. This region has a fair snowfall record, with mid- to late-season being the most reliable period.

I've been to Borovets several times. No trouble whatsoever despite wandering around at all hours.

The resort has been unlucky with snow this year but that is apparently changing as we speak.

As for lift passes: I've skied in Austria and actually been on the mountain with a group when the powers that be have decided to shut down operations due to conditions. It can happen anywhere but here there may be an obvious advantage to travelling with a brit tour company.

Borovets is a ski resort, not a shopping mecca. If you want shopping, try Samokov or Sofia. Most people who visit borovets have a good time, but there are always those who expect more.

It is not Zermatt, St Moritz or Gstaad. and even in those places, kit gets stolen. Usually skis.

Had my own kit in Borovets every visit. Never a problem with any of it going missing. Once had some sticks (Poles) stolen while in Scotland though.

With an open mind and with your group, you'll have a good time.

Try the discussion board on Bulgariaski.com. Look for Kas and Bobby. They may well be able to put your mind at rest.

Borovets is the best known of the Bulgarian Resorts, with a wide range of facilities and on one of the highest rideable areas in Eastern Europe. Locals say that the season comes late in Borovets: mid-February often sees only half the runs open, but riders in the know say that April has the best snow. The terrain is mainly suited to intermediate carvers, with nothing too challenging for the experienced. The 23 miles of piste is split into three areas, offering open runs and lines through trees. Hard packed snow and ice frequently make the runs tough work and with small rocks sticking out when there's poor snow cover, a little vigilance is essential. Some of the best riding can be found on the runs above the 2500m point. The 6 person gondola ride to the top station takes about 25 minutes and to avoid queues avoid the period between 9am and 11am. A tip for those on a package trip is to buy your lift ticket before you arrive, it could save you $20.

I learnt how to ski at Borovets in December and it was such a fantastic experience- I'd recommend it to anyone who is just starting out. Equipment hire, lessons, lift passes and importantly alcohol are all quite reasonably priced. There are restaurants on the slopes so no shortage of pit stops. The bunny slope is not overly challenging for a total novice and after a few days of lessons the green slope was challenging enough to feel a great sense of elation at having made it down without taking myself or anyone else out. The harder slopes were closed but looking at some of the drops... Well I still get the willies thinking about taking a wrong turn onto them. There is one old style lift that doesn't slow down as you hit the drop off point so that gets the heart racing the first few times. The others are newer and do slow. The cable car is fantastic for the views. All in all- a fantastic experience!

Borovets is a very quaint resort with a rustic charm and homely atmosphere. The smel of log burners being lit in the morning helps create a magical atmosphere for Christmas. We have never been skiing in France but what Borovets lacks in sophistication it makes up for in genuine charm. We rarely queued for a ski lift and had wall to wall sunshine the whole time we were there. Our ski instructor Jaiko was a miracle worker as well as having the patience of a saint. We know a lot of people who have been to many ski resorts in Europe and they all agree that Borovets has a lot to offer as well as being quirkily charming. Go elsewhere for fine dining and posing but embrace value for money, simple wholesome food and drink and a great Bulgarian welcome.

My experience in Borovets was better than i could ever have imagined. Everything was so easy, and everyone was so kind! I even got welcomed by a packed lunch at the Rila Hotel (as i arrived too late for dinner). The food there was brilliant! Anyway, the main part of the holiday, the skiing, was perfect! Loads of snow! And thanks to the brilliant instructor Ivo Djadjev, my technique and confidence improved hugely!! For the whole 6 days of ski school he was so kind, and made sure that everyone in the group was happy and safe. He would even stay out with us for later than he had, helping us improve and just make the most of the perfect conditions! Lovely, friendly place. Can't wait to go again!