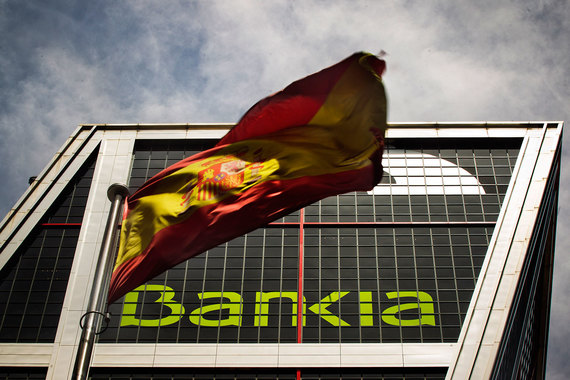 We have a similar problem. €125k frozen. No access to broken online banking. No help from branch staff after expensive, time consuming trips to Spain. No way to retrieve the money.

Did anyone have any success sorting this out? And how?

WORST WORST WORST THIEVING LYING BANK IN SPAIN - THEY STOPPED ALL OUR DIRECT DEBITS, WE HAD MONEY IN THE BANK TO PAY FOR HEALTHCARE INSURANCE ETC - THEY STOLE OFF US A 90 Euro a month bank charge - Even trying to leave them they want P60's from the Uk etc - AVOID LIKE THE PLAGUE - FUENGIROLA ONE WE USED. ALSO PREPARE TO WAIT 1 HOUR EVERY TIME YOU GO IN. HOPELESS CLOWNS - YOU HAVE BEEN WARNED!!!!!

Unfortunately I had to rate them with one star to enable me to write a review. One star is one too many. Bankia should change their name to WANKIA. This has to be the worst bank I have ever had the misfortune to use. I sold my house in Spain over one year ago and my lawyer paid the funds into my BMN account which was taken over by Bankia. I found that I could not use my account and it has taken over 3 months of chasing and sending UK tax documents to them to unblock it was eventually unblocked for one transaction and then blocked again. Worst bank I have ever had the misfortune to deal with. Not only that but I then found out that a sum €400 was being removed from my account each year. When I queried this I was told it was for life insurance on my wife and that it had been taken each year since 2012. I advised them that we had never requested this and I was eventually sent a copy of the document supposedly by my wife for the insurance but payment was being taken from my bank account. On checking the documents the signatures were clearly a forgery and the date that the document was signed we were not in Spain nor for some weeks either side of the date. Needless to say the bank will deny all responsibility even though a possibly current employee who should be fairly easy to identify has committed fraud. My house sale proceeds are now frozen and I just want to close my account and get my money out.

Have to give it 1 star. A bank that wouldnt change danish money unto euro.

Bankia is a Spanish banking conglomerate that was formed in December 2010, consolidating the operations of seven regional savings banks: Caja Madrid, Bancaja, La Caja de Canarias, Caja de Avila, Caja de Laietana, Caja de Segovia and Caja de Rioja. Formerly a private bank, it was partially nationalized by the government of Spain in May 2012 due to near collapse of the institution. On 25 May 2012, Bankia requested a bailout of EUR 19 billion, the largest bank bailout in the nation's history.

The Spanish banking system is fully integrated with international financial markets and includes credit, stock and money markets, as well as markets for derivatives. Foreign banks with authorization in another EU member country and plans to establish a branch or representative office in Spain do not need to get authorization from the country’s central bank. Banks in Spain and foreign companies are subject to the same conditions of access to the Spanish financial system.

Moody’s Investors Service gives the Spanish banking system a stable outlook, as the agency expects a continued decrease in problem loans and stable profitability in 2017 and 2018. The rating agency’s outlook also indicates the creditworthiness of banks in Spain in the next 12 to 18 months.

For anyone considering a career in banking in Spain, this list of top banks in Spain is a helpful guide on where to start. To learn more, see our extensive list of financial institutions.

Bankia is the Spanish financial institution, subsidiary of Financial Savings Bank. It is the first Spanish bank for domestic business, with total assets of 272,000 million euros and a net equity value of 12,000 million euros.

One of its strengths is the high capillarity of its national network, which is a leader in six autonomous regions.

One of the requirements of getting a place to live here in Spain was to open a Spanish bank account, which can be difficult and not accepted by all banks without your residency card. As a foreigner, it was stressful trying to figure everything out, but Bankia was very helpful.

The workers are very nice, and they talked me through everything. They allowed me to open an account with them, although I have had trouble viewing the application correctly because I haven't gotten my TIE yet. I'm hoping it will be resolved once I can show them that. They were very patient with my sub-par Spanish skills :)